Hiroshima on Saturday marked the 77th anniversary of its atomic bombing by the United States, amid heightened concern in Japan and elsewhere over repeated Russian threats to resort to nuclear weapons amid the war in Ukraine.

Mayor Kazumi Matsui cautioned in a Peace Declaration at a memorial ceremony in the western city that even as civilian lives are being lost in the Russian aggression, reliance on nuclear deterrence is gaining momentum around the world.

"We must immediately render all nuclear buttons meaningless," he said. 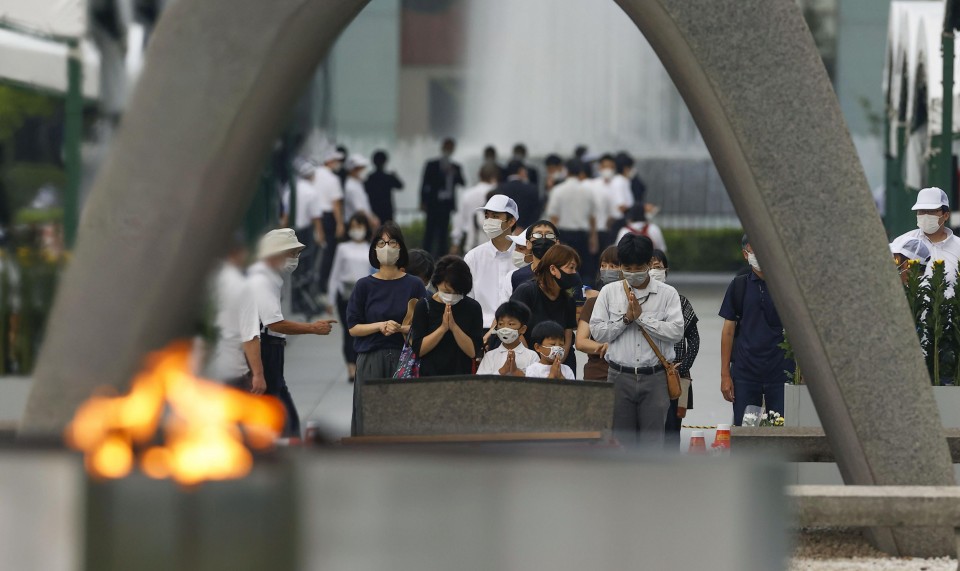 People pray at the Peace Memorial Park in Hiroshima, western Japan, on Aug. 6, 2022, the 77th anniversary of the U.S. atomic bombing of the city. (Kyodo)

U.N. Secretary General Antonio Guterres was also present at the annual ceremony at the Peace Memorial Park near ground zero, becoming the first U.N. chief to attend since his predecessor Ban Ki Moon in 2010.

Prime Minister Fumio Kishida, who represents a constituency in Hiroshima, decried in his remarks the apparently declining momentum toward a world without nuclear weapons, calling on humanity not to repeat the tragedy of nuclear weapons use. 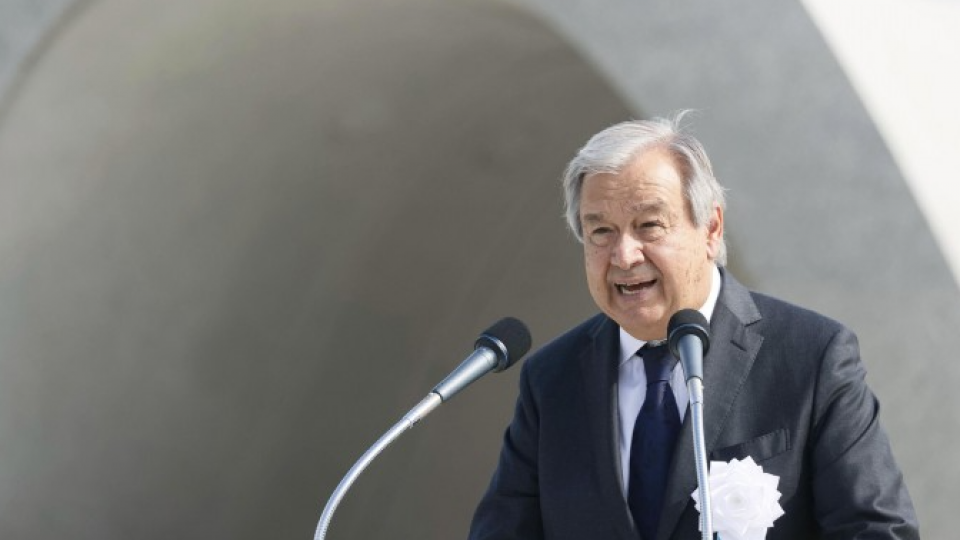 U.N. Secretary General Antonio Guterres delivers a speech at a ceremony to mark the 77th anniversary of the U.S. atomic bombing of Hiroshima on Aug. 6, 2022, at the Peace Memorial Park in the Japanese city. (Kyodo)

The prime minister said Japan will work to connect the "reality" of a deteriorating security environment and the "ideal" of a world without nuclear weapons.

With Hiroshima set to host the summit meeting of the Group of Seven nations next May, Kishida said he and the other leaders will pledge in front of a monument symbolizing peace to work together to safeguard universal values.

The ceremony drew representatives from 99 nations and the European Union, while Russia and Belarus, which is aiding Moscow in the Ukraine war, were not invited.

In the declaration, the mayor highlighted the need for urgent action by nuclear weapons states to build bridges of trust and take concrete steps toward realizing a nuclear-free world.

"To accept the status quo and abandon the ideal of peace maintained without military force is to threaten the very survival of the human race," Matsui said.

The mayor urged the leaders of nuclear powers to visit Hiroshima and Nagasaki, the other Japanese city devastated by a U.S. atomic bombing in 1945, to "personally encounter the consequences of using nuclear weapons."

"I want them to understand that the only sure way to protect the lives and property of their people is to eliminate nuclear weapons," he added. 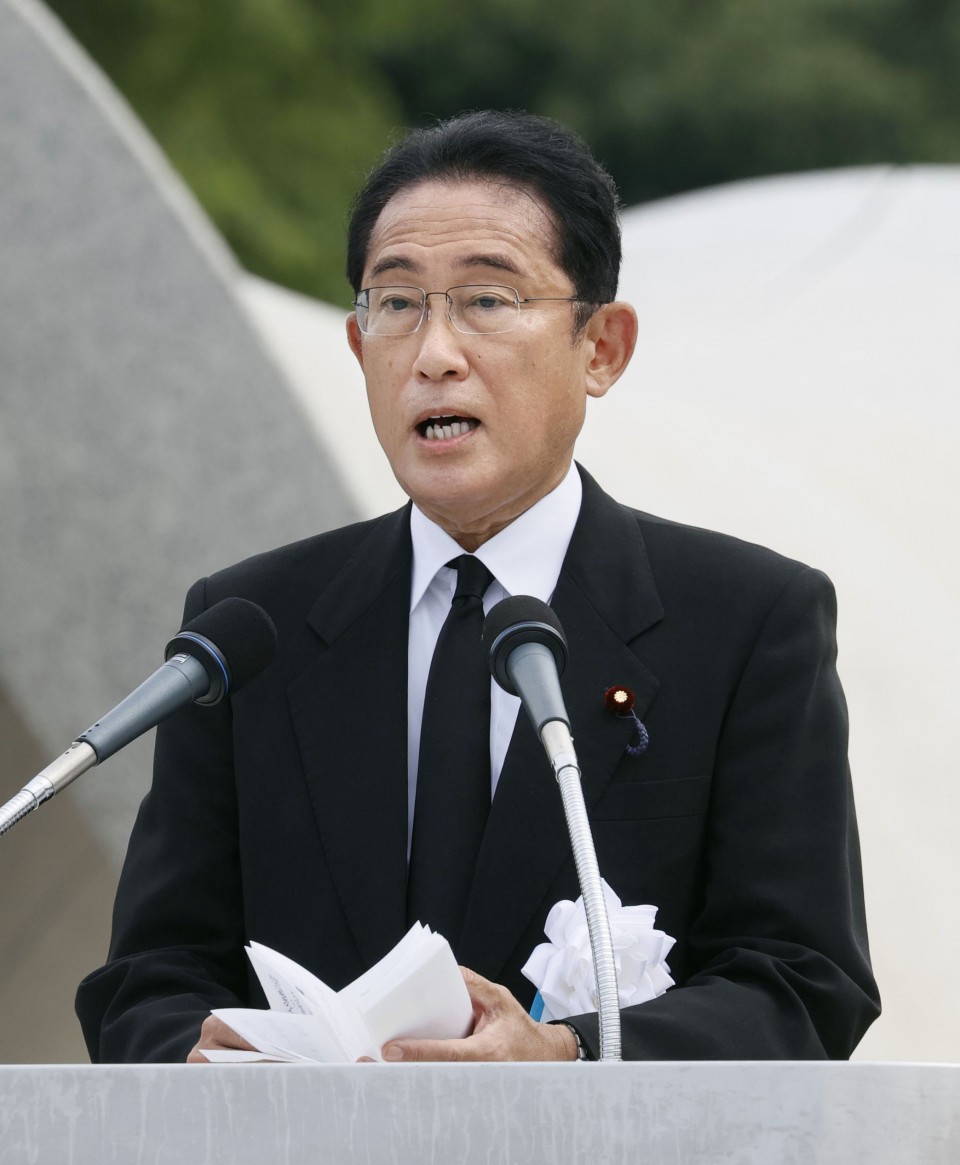 Japanese Prime Minister Fumio Kishida makes a speech at a ceremony to mark the 77th anniversary of the U.S. atomic bombing of Hiroshima on Aug. 6, 2022, at the Peace Memorial Park in the Japanese city. (Kyodo)

Guterres warned in his remarks that a "new arms race is picking up speed," while crises with grave nuclear undertones are unfolding, including in Ukraine.

"It is totally unacceptable for states in possession of nuclear weapons to admit the possibility of nuclear war," he said.

"Take the nuclear option off the table -- for good. It's time to proliferate peace," he added, calling on nuclear powers to commit to "no first use" of nuclear weapons.

After the ceremony, Kishida and Guterres toured the Hiroshima Peace Memorial Museum. During their brief talks, the two agreed to continue working closely toward a world free of nuclear weapons, the Foreign Ministry said.

The ceremony was on a larger scale than last year's as restrictions to stem the spread of COVID-19 have been eased nationwide, but the number of prepared seats was still only a third of pre-pandemic levels, or about 3,550, and 2,854 people actually attended.

A stream of visitors came to the park from the early morning to offer prayers and flowers to those who suffered as a result of the bombing. They included many survivors, known as hibakusha in Japanese.

One survivor, 95-year-old Ikue Suzuki, arrived in front of the Cenotaph for the A-bomb Victims, the arch-shaped monument in the park, in a wheelchair pushed by her daughter.

As Suzuki prayed, she said in tears, "Why did you have to die, Azuma san?"

Shizue Azuma was her best friend and they were together in a hospital when it collapsed because of the blast, leaving her friend dead.

"I'm becoming more afraid that peace might be gone because of the situation in Ukraine, while Japan's neighbors are showing signs of war," she said.

"I'm always worried in my heart that if humanity has nuclear weapons, there will surely be another war," said Suzuki, who traveled from Kanagawa Prefecture near Tokyo to attend the ceremony for the first time.

During a meeting with Kishida after the ceremony, representatives of local atomic bomb survivors' groups called for the government to ratify the Treaty on the Prohibition of Nuclear Weapons and be the "front-runner in nuclear abolition."

Kishida signaled that ratification was not yet on the table, saying, "The treaty serves as an exit to a world without nuclear weapons. We have to start by changing our ally, the United States."

The city has in the past year added a further 4,978 people to the list of those officially recognized as victims of the atomic bombing who have died. The list, bearing the names of 333,907 people, was placed back in a space within the cenotaph on Saturday.

The combined number of officially recognized survivors of the two nuclear attacks stood at 118,935 as of March, down 8,820 from a year earlier, the Ministry of Health, Labor and Welfare said. Their average age was 84.53. 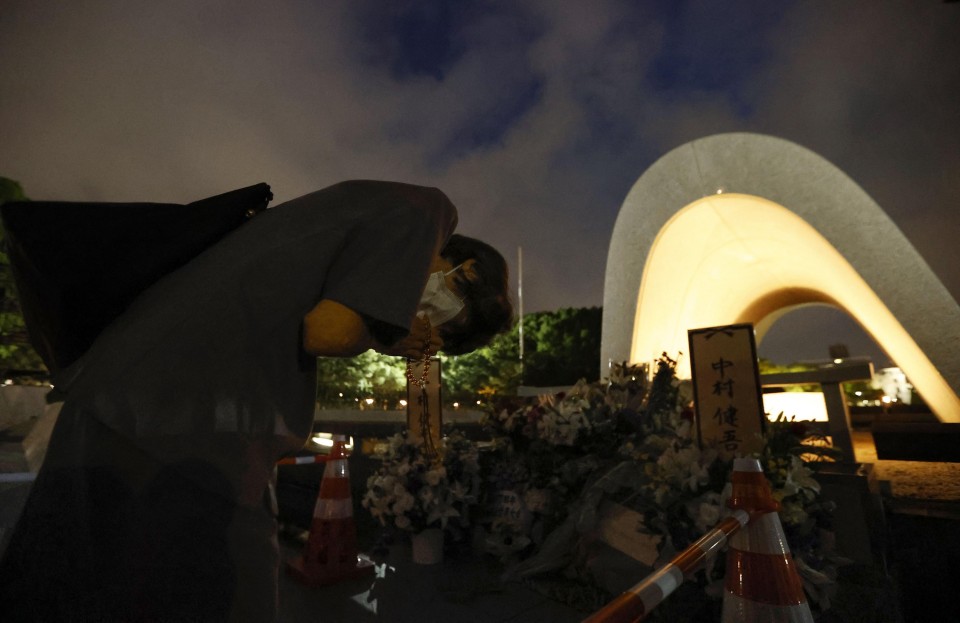 A woman prays at the Peace Memorial Park in Hiroshima, western Japan, on Aug. 6, 2022, the 77th anniversary of the U.S. atomic bombing of the city. (Kyodo)

The following is the gist of the Peace Declaration read Saturday by Hiroshima Mayor Kazumi Matsui at a ceremony to mark the 77th anniversary of the atomic bombing of the city.

-- By invading Ukraine, Russian President Vladimir Putin is stealing the lives and livelihoods of innocent civilians in Ukraine.

-- Nuclear deterrence is gaining momentum worldwide, which is a betrayal of humanity's determination to achieve a world free of nuclear weapons.

-- Accepting the status quo and abandoning the ideal of peace maintained without military force will threaten the human race.

-- I want leaders of nuclear weapon states to understand the only sure way to protect the lives and property of their people is to eliminate nuclear weapons, and hope those who attend the Group of Seven summit in Hiroshima next year will reach this conclusion.

-- Hiroshima will continue striding toward nuclear weapons abolition with a "never give up" spirit.

-- I demand Japan serve as a mediator at the ongoing Nuclear Non-Proliferation Treaty review conference. Japan must participate in the next meeting of parties to the Treaty on the Prohibition of Nuclear Weapons and promptly join the pact. 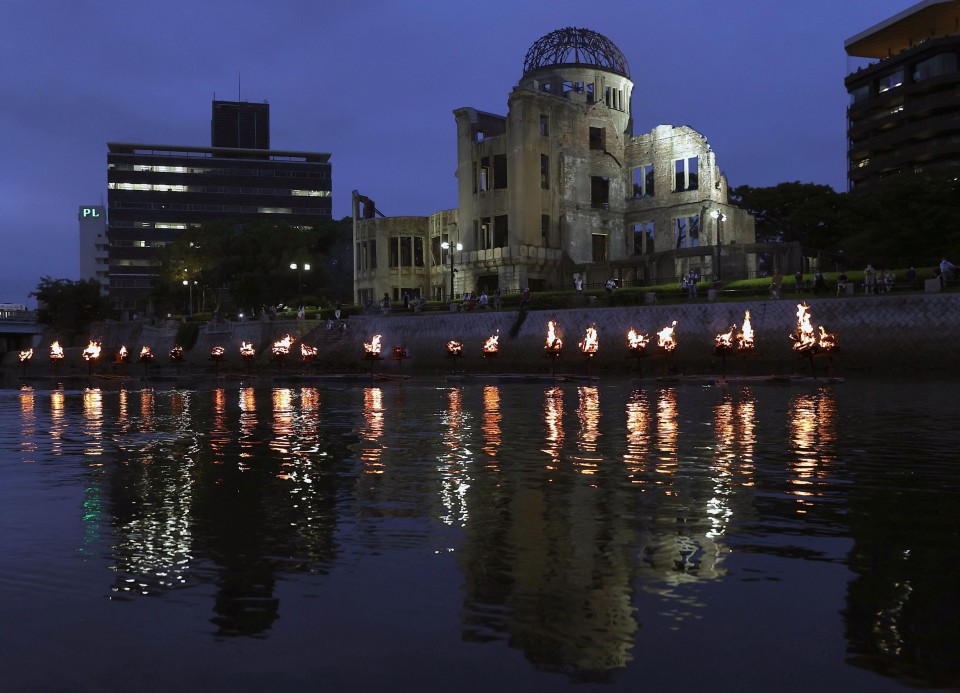 The World Heritage-listed Atomic Bomb Dome is pictured in Hiroshima on Aug. 5, 2022, the eve of the 77th anniversary of the U.S. atomic bombing of the western Japan city. (Kyodo) ==Kyodo