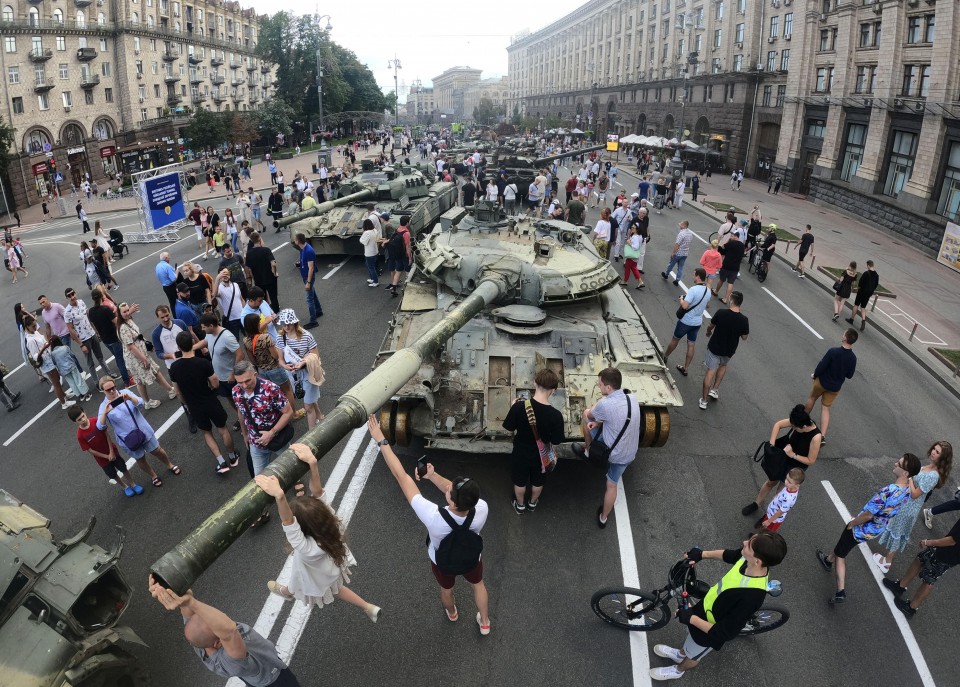 Russian tanks destroyed in the country's invasion of Ukraine are put on display in the Ukrainian capital of Kyiv on Aug. 20, 2022, ahead of the 31st anniversary on Aug. 24 of the country's independence from the Soviet Union. (Kyodo) ==Kyodo

TOKYO - Japan is planning to stop requiring proof of a negative COVID-19 test result from entrants to the country as long as they have completed three rounds of vaccinations, while also raising the cap on the number of entrants from the current 20,000 a day, a government source said Tuesday.

The government is also set to open Japan to more foreign tourists by allowing unguided tours -- ones not accompanied by tour conductors -- after the country on June 10 started processing applications for accepting foreign visitors on guided package tours from 98 countries and regions deemed low-risk for coronavirus transmission.

TOKYO - Japan has granted refugee status to 98 people who fled Afghanistan since the Taliban returned to power last August, government sources said Tuesday, in a rare move for a country with a poor record on giving asylum.

The number of newly recognized refugees, comprising staff who were working at the Japanese Embassy in Kabul and their family members, exceeded the record 74 refugees accepted by Japan in 2021.

The medical giant, which has lagged behind in COVID-19 vaccine development, said it is also applying for approval of one for dengue fever in Asian and South American countries as well as in the European Union, aiming to push its annual sales up to $1.6 billion.

TOKYO - Japan's Maritime Self-Defense Force said Tuesday it has conducted its first joint drill with the Tongan navy, as concerns grow over China's increasing military clout in the South Pacific.

The MSDF said its destroyer the Kirisame engaged in communication training and positioning exercises on Saturday and Monday in waters near the Tongan capital of Nuku'alofa, along with Tongan patrol ship the Ngahau Siliva, in a bid to improve the MSDF's tactical skills and enhance understanding with the Tongan navy.

TOKYO - Japan saw a record number of daily COVID-19 deaths at over 330 on Tuesday, exceeding the previous high of 327 logged on Feb. 22, according to a tally of new cases across the country.

Najib's failed last-ditch attempt for the Federal Court to overturn the Kuala Lumpur High Court ruling made in July 2020 meant he has to start serving his jail sentence immediately.

TAIPEI - Taiwan President Tsai Ing-wen met with a delegation of Japanese lawmakers on Tuesday amid China's assertive actions in the Asia-Pacific region.

In the meeting with Keiji Furuya, the head of a cross-party group of legislators seeking to strengthen Japan-Taiwan relations, Tsai expressed appreciation for late Japanese Prime Minister Shinzo Abe's declaration that a Chinese attack on Taiwan would constitute an emergency for Tokyo and the Japan-U.S. alliance.

TOKYO - A survey released Tuesday by a Tokyo-based company that encourages tourism to Japan showed that 72 percent of respondents will not, or will probably not, visit the country if it continues with its current entry controls.

The D2C X Inc. survey also showed 91 percent of the 1,717 overseas respondents found the entry controls, which include COVID-19 testing within 72 hours of departure to Japan, too strict or rather strict, illustrating how the country's pandemic border measures have deterred visits from overseas.