Japan is planning to stop requiring proof of a negative COVID-19 test result from entrants to the country as long as they have completed three rounds of vaccinations, while also raising the cap on the number of entrants from the current 20,000 a day, a government source said Tuesday.

The government is also set to open Japan to more foreign tourists by allowing unguided tours -- ones not accompanied by tour conductors -- after the country on June 10 started processing applications for accepting foreign visitors on guided package tours from 98 countries and regions deemed low-risk for coronavirus transmission. 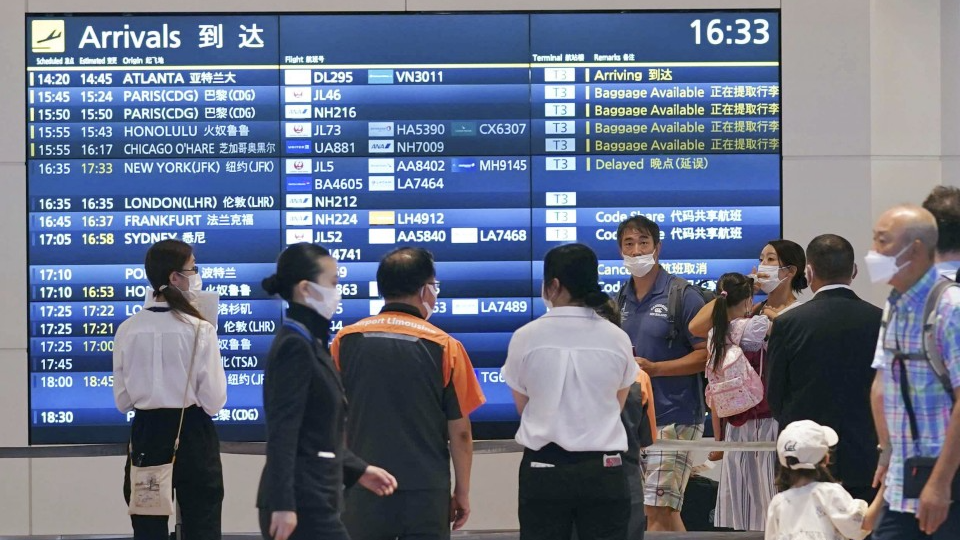 People wearing face masks are seen at an arrival lobby of Haneda airport in Tokyo on Aug. 23, 2022, amid the coronavirus pandemic. (Kyodo) ==Kyodo

The countries include the United States, Britain, China, South Korea, Indonesia and Thailand.

Prime Minister Fumio Kishida is expected to announce further easing in entry requirements and a higher cap on entrants Wednesday.

While Japan has slowly lifted its cap on entry numbers, most recently doubling it to 20,000 on June 1, the government seeks to raise it further, possibly to 50,000, the source said.

The timing of the relaxation is still under consideration, and whether tourists will return quickly remains unclear at a time when oil prices have surged globally amid Russia's war in Ukraine.

"We will make decisions appropriately in view of the infection situation at home and abroad, and border control measures taken by major countries," said Chief Cabinet Secretary Hirokazu Matsuno during a regular news conference Tuesday.

Kishida had initially sought to announce further easing in Japan's border control measures during the eighth Tokyo International Conference on African Development to be held in Tunisia on Aug. 27 and 28, but he had to give up going there in person as he has become infected with the coronavirus, according to the source.

Before the pandemic, the country had aimed for 40 million foreign visitors in 2020 when it was originally scheduled to host the Olympic and Paralympic Games, which were postponed for a year.