Japan's Kaoru Mitoma, Takehiro Tomiyasu and Yuta Nakayama are hoping their time in England will hold them in good stead with the mid-season World Cup just three months away in Qatar.

All three began the new season positively with Mitoma shining on his Premier League debut for Brighton, Tomiyasu returning from his recurring injury at Arsenal and Nakayama scoring on his first league start for Huddersfield in the second-tier Championship.

The 25-year-old Mitoma introduced himself to Europe last season with an impressive loan spell at Belgium's Royal Union Saint-Gilloise. He brought Brighton fans to their feet in his first game in England on Saturday as he made a 15-minute cameo in a 0-0 home draw with Newcastle. 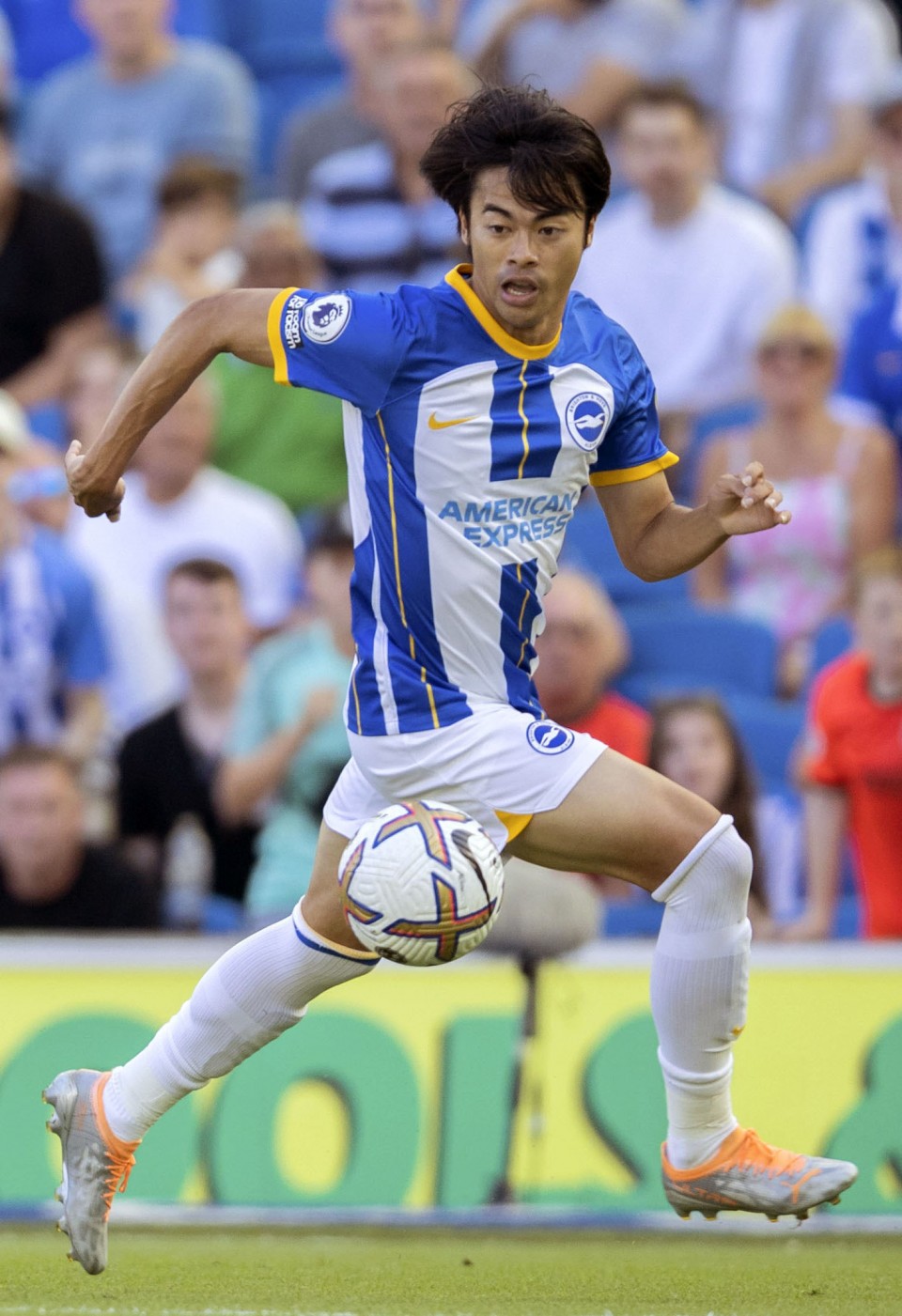 Kaoru Mitoma is pictured in action for Brighton and Hove Albion against Newcastle United in a Premier League game in Brighton, England on Aug. 13, 2022. (For editorial use only)(Kyodo)

Mitoma said he had "no nerves at all" entering the packed Amex Stadium and his confidence was reflected in a dazzling performance.

The highlight was taking on Kieran Trippier, skipping past the England international and providing the ball to Pascal Gross, who steered just wide.

It was something fans in Japan are accustomed to, having seen Mitoma cut opponents apart in 2020 and 2021 for Kawasaki Frontale.

"I'm happy the dream has come true, but frustrated we couldn't get the win," Mitoma said of his league debut. "It was difficult as I didn't get much of the ball, but I could create a chance and I believe I'm expected to show more of those."

"I believe (Trippier) was fairly tired after playing the first half on the sunny side of the pitch, and I think I need to be winning in those circumstances. There was that gap in our condition, but it's a positive I could get past him."

Head coach Graham Potter is thrilled to have Mitoma, only the second genuine winger from Japan to play in the English top flight following Ryo Miyaichi, who played a total of 17 games for Bolton, Wigan and Arsenal.

"He's going to cause fullbacks a problem, he's got the ability to go by people. He's quite unique. He had a fantastic impact," Potter said. "He's a bit of a nightmare for defenders. I wouldn't fancy playing against him, that's for sure."

Mitoma's two goals against Australia in March clinched Japan's spot in Qatar. He knows he'll need to adjust to his new environment quickly to earn the playing time needed ahead of the World Cup.

"I could take the first step and show a glimpse of what sort of player I am to the supporters," he said. "I could also show a bit to the head coach and coaches that I can do the job."

"It'll be about how much I can produce (in terms of numbers), and I feel I need to do that when I'm given longer playing time. The most important thing is to maintain my condition and stay injury-free."

Tomiyasu knows what it takes to play in one of the world's best leagues after injuries derailed his good start with Arsenal last term. 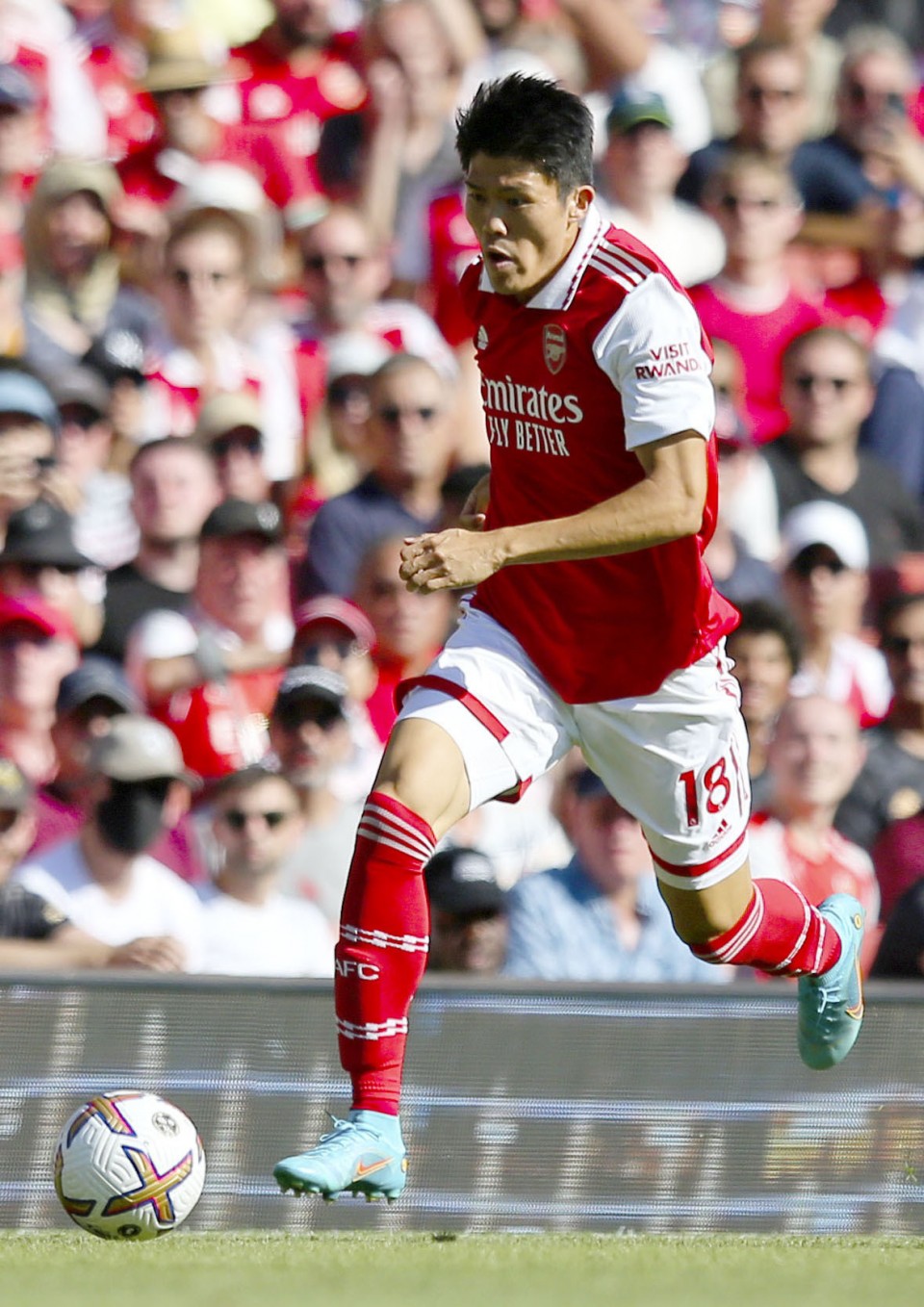 Takehiro Tomiyasu is pictured in action for Arsenal against Leicester City in a Premier League game in London on Aug. 13, 2022. (For editorial use only)(Kyodo)

The 23-year-old quickly established himself at right-back but missed most of Arsenal's games from January through April with injuries to both calves, limiting him to just 21 league appearances overall.

A late-season injury also saw him sit out Japan's four home international friendlies in June before he finally returned to action on Saturday, coming on with 15 minutes to go as Arsenal beat Leicester 4-2 at home.

"The most important thing is to manage not to overdo it, so I'll always be fit and ready to play through the end of the season," he said.

"I had lots of injuries last season...I need the will to win a regular spot again, just like a new player."

Arsenal's involvement in the Europa League means there will often be two games a week prior to the World Cup, something Tomiyasu welcomes.

"I think my match fitness will improve," he said. "There won't be a World Cup if I don't do my job at Arsenal. I want to make the most of my days here first."

While Nakayama's move from Dutch side Zwolle to Huddersfield was relatively under the radar, the versatile defender made his mark when he headed in the opener in his first league start on Saturday, a 3-1 home win over Stoke. 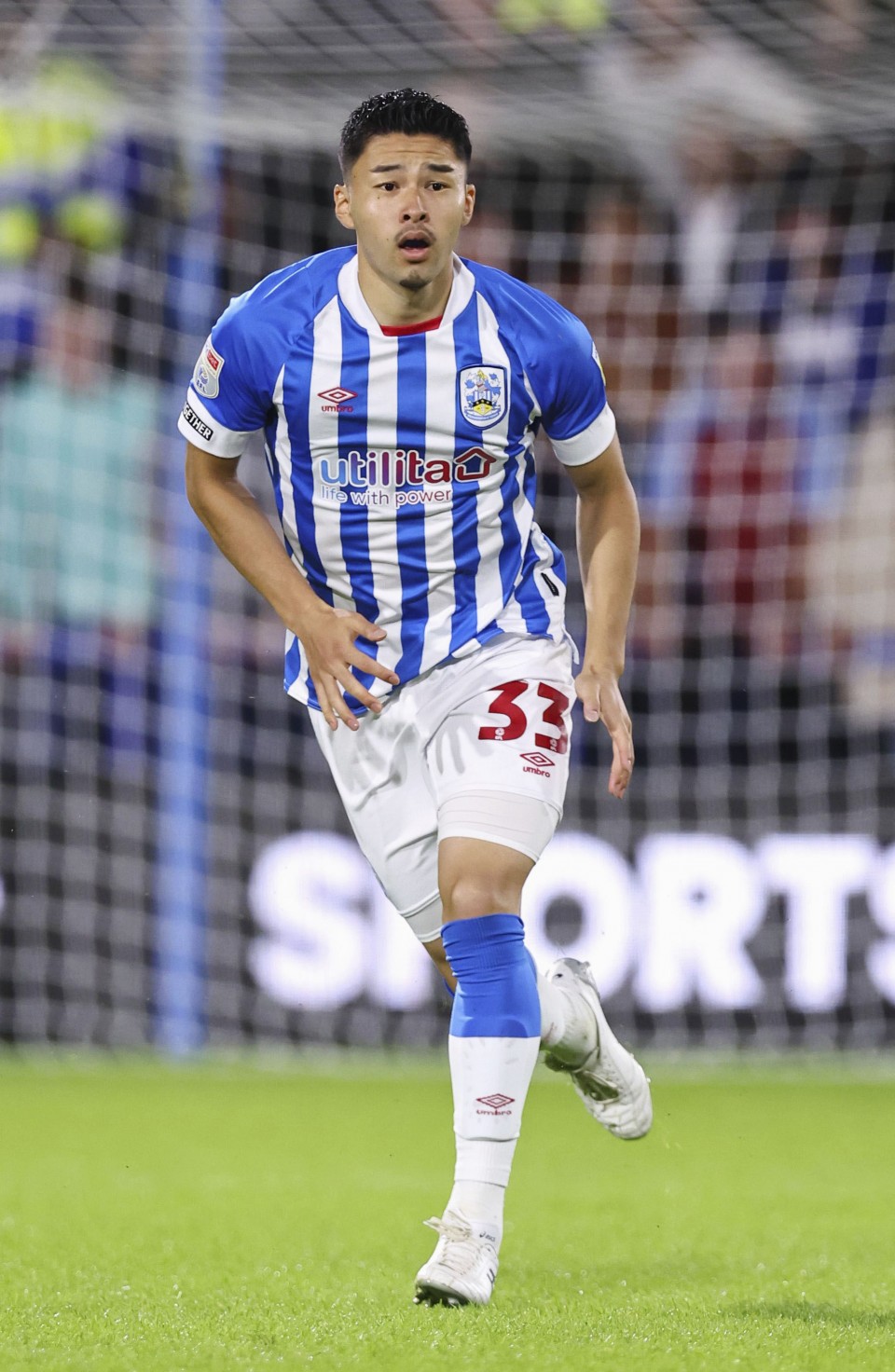 Yuta Nakayama is pictured in action for Huddersfield Town against Burnley in a second-tier Championship match in Huddersfield, England on July 29, 2022. (AMA/Getty/Kyodo)

The 25-year-old has not been a regular starter for Japan during World Cup qualifying but a successful start in a new league could put him into the mix in Qatar.

"(The Championship) was an unknown world to me, but somehow I feel I'm coping with its physical side," he said. "That's thanks to the accumulation of the work I put in both in Japan and the Netherlands as I aimed to play (in England)."