Vissel Kobe advanced to the Asian Champions League quarterfinals, the J-League first-division strugglers downing league-leading Yokohama F Marinos 3-2 Thursday in the Round of 16.

Vissel, fighting for survival in 16th place in the 18-team first division, started more regulars than Marinos, who hold a five point league lead, and took advantage of some slack defending throughout at Saitama Stadium.

Nanasei Ino scored the opener for Vissel in the seventh minute, outracing a defender to a through pass and then shooting past keeper Yohei Takaoka when he came out to challenge him. Koya Yuruki set up the goal, intercepting a pass in the middle of the pitch and beating a defender before spotting Ino racing toward the goal. 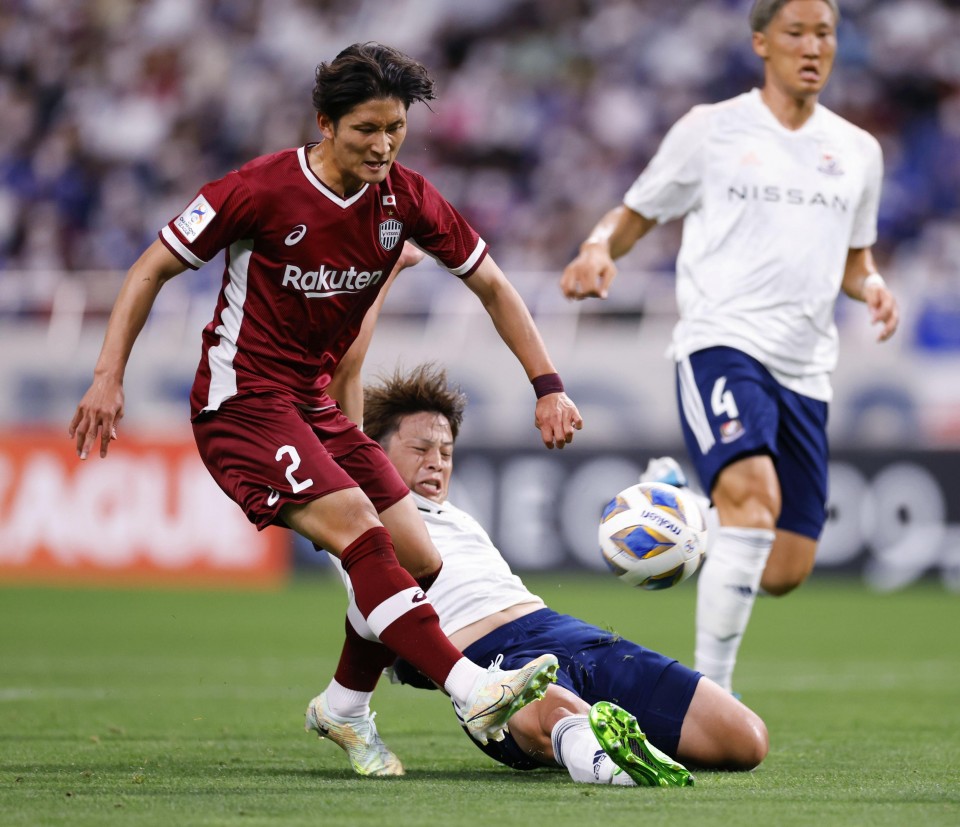 Nanasei Ino (L) scores the opener for Vissel Kobe in their Asian Champions League Round of 16 match against Yokohama F Marinos on Aug. 18, 2022 at Saitama Stadium in Saitama, near Tokyo. (Kyodo)

Marinos wasted no time answering back. After spreading the Vissel defense, Teruhito Nakagawa ran onto a through ball down the right flank, and crossed for Takuma Nishimura, who dove to meet it and head it in.

Daiju Sasaki scored from the spot after another poor Marinos pass in their defensive half on the half hour. Ino stole the ball, and Yuya Osako crossed to Sasaki, whose shot from the middle of the box struck Yuki Saneto's arm.

Yutaro Oda put the game on ice with his 80th-minute goal. Vissel captain Hotaru Yamaguchi took advantage of a defensive mix-up to run onto a ball to the right of the area and cross to Oda, the substitute side-footing it into the goal from close range.

Anderson Lopes made the score more respectable with a 90th-minute goal for Marinos.

In other round of 16 action, Jeonbuk Hyundai Motors beat Daegu FC 2-1 in an all-South Korean clash.

On Friday, J1 side Urawa Reds will be at their Saitama Stadium home ground against Malaysia's Johor Darul Ta'zim.

Football: Reds into ACL round of 16, Frontale eliminated