The former chairman of the Unification Church said Tuesday that its founder had a close relationship with both the grandfather and the father of former Prime Minister Shinzo Abe, amid growing public scrutiny of the church over the murder of Abe and his assailant's grudge against the religious group.

Kwak Chung Hwan held a press conference in Seoul, following media reports on the assailant's motive that his mother's donations to the church ruined his family's finances and he believed Abe's grandfather had invited the church to Japan from South Korea. 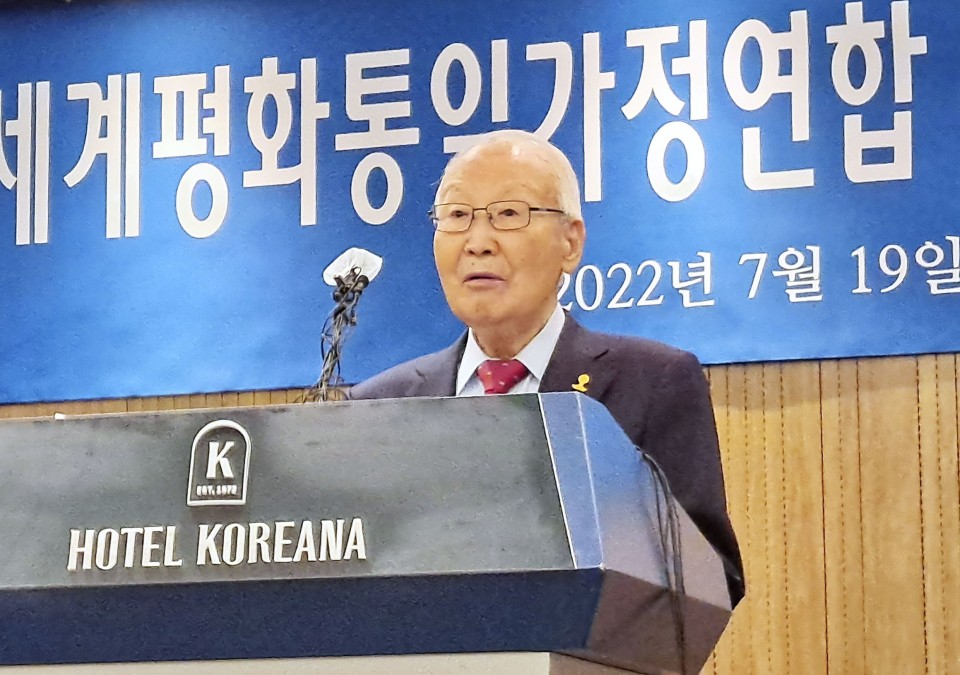 Kwak Chung Hwan, former chairman of the Unification Church, speaks at a press conference in Seoul on July 19, 2022. (Kyodo)

The former chairman and reportedly one-time No. 2 of the Family Federation for World Peace and Unification, widely known as the Unification Church, added that he knew Moon, the church's founder, was also close to Abe's father, former Japanese Foreign Minister Shintaro Abe.

Kwak said political leaders in Japan during the 1960s to 1970s were concerned about left-leaning movements in the country.

Around that time, Moon released his anti-communism theory which impressed the Japanese political leaders, the former chairman said.

"Donations from Japan contributed to Moon's activities across the world greatly," he also said.

Kwak, who parted ways with the church around 2009 according to the media reports, criticized the religious group's current leadership.

"I feel a deep responsibility (for the attack on Abe) as I've heard the assailant's motive is associated with a grudge against donations (to the church)," he said.

The assailant, Tetsuya Yamagami, was arrested after he fatally shot Abe during a street speech in the western city of Nara on July 8. Yamagami's uncle has said the man's mother donated about 100 million yen ($720,000) in total to the Unification Church.

The church, founded in South Korea in 1954 by Moon and known for its group weddings, has a controversial reputation in Japan, where it claims to have about 600,000 followers.

Meanwhile, the 41-year-old Yamagami has said he thought he would die by the end of July because he ran out of money and that he tried to kill Abe before then, according to the investigators.

He had at least 600,000 yen ($4,353) in debts although his bank account contained some 200,000 yen as of July 8 when he shot Japan's longest-serving leader on the street by using a homemade gun, the investigators said.