The mother of the man who fatally shot former Prime Minister Shinzo Abe donated about 100 million yen ($720,000) to the Unification Church, the man's uncle said Friday.

The assailant, 41-year-old Tetsuya Yamagami, has told investigators he believes Abe was linked to the church and that he resents the organization because his mother's donations to it ruined his family's finances.

Yamagami shot Abe on July 8 when the former prime minister was delivering a stump speech on a street in the western city of Nara. Yamagami was arrested at the scene where police found a homemade gun, and he was sent to prosecutors Sunday on suspicion of murder.

Her contributions included about 60 million yen from a life insurance payment over the death of Yamagami's father, his uncle told reporters in Osaka Prefecture. He said the other 40 million yen to the Family Federation for World Peace and Unification, widely known as the Unification Church, came from her selling family real estate. 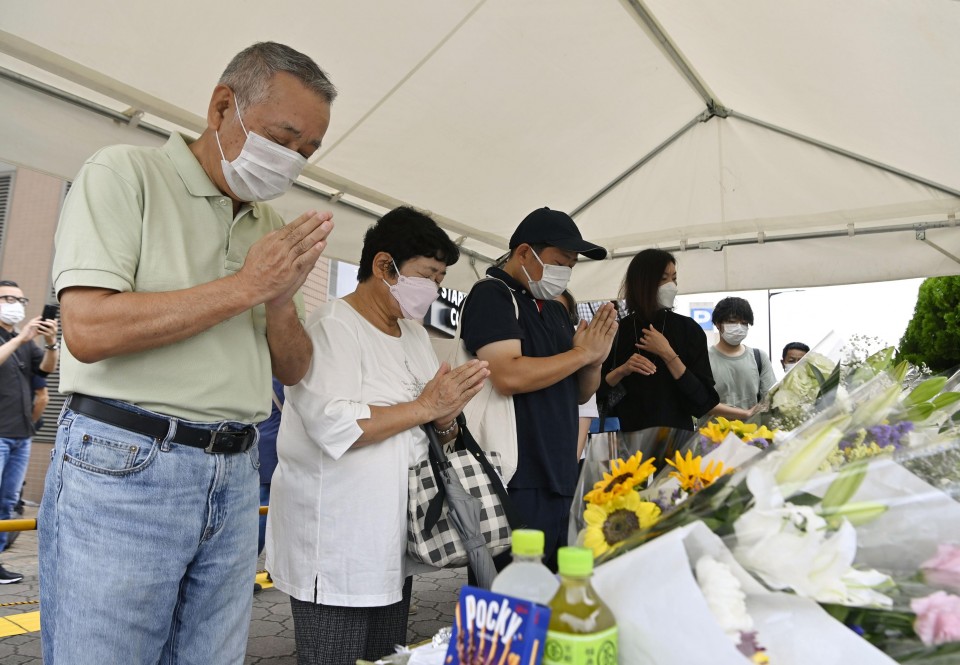 Photo shows people mourning the death of former Prime Minister Shinzo Abe near the scene of his assassination in Nara, western Japan, on July 15, 2022. (Kyodo)

Yamagami's mother continued donating smaller amounts even after going bankrupt in 2002, said the man's 77-year-old uncle, who has continued to support her financially for many years, adding, "I believe she was a very important follower of the church. She was under mind control."

Yamagami's mother joined the church around 1991 following his father's suicide in 1984, according to his uncle.

The church has claimed it returned 50 million yen to her, while adding there were no records of the amounts of the donations she made to the organization. But Yamagami's uncle criticized the church's response and accused it of attempting to evade responsibility.

His uncle said the family's subsequent financial difficulties meant Yamagami had to abandon going to college due to lack of funds. "He was extremely smart just like his father," he said. "He was hardworking, too, and I only have good memories of him."

After giving up on college Yamagami attended cram school with the aim of becoming a firefighter, but failed the test due to nearsightedness, his uncle told reporters.

As a Maritime Self-Defense Force member in 2005, Yamagami attempted suicide because he wanted his brother and sister to benefit from a life insurance payment, his uncle said. Yamagami told the MSDF that he tried to take his own life because "my life and my family were ruined by the Unification Church," according to his uncle.

He also said Yamagami's mother is staying at his home and resting due to extreme fatigue, and added that he is not sure if she is still in touch with the church and that she is cooperating with the investigation.

Investigative sources said Yamagami told police he test-fired a homemade gun at a facility in Nara connected to the Unification Church at around 4 a.m. on July 7, a day before the fatal shooting.

Yamagami has told investigators that later that same day he went to Abe's campaign stop in Okayama Prefecture with homemade weapons including the one eventually used to kill Abe. He appears to have been looking for a chance to shoot the former prime minister at the event.

The Unification Church, founded in South Korea in 1954 by Sun Myung Moon and known for its group weddings, has a controversial reputation in Japan, where it claims to have about 600,000 followers.

It has in the past been the subject of a series of complaints claiming the church forced people to buy expensive pots and seals. It also encourages believers to donate 10 percent of their income, according to its Japanese arm's website.

"(Former Prime Minister) Nobusuke Kishi invited the church (to Japan from South Korea). So I killed (his grandson) Abe," Yamagami has said, according to investigative sources.