The suspect in former Prime Minister Shinzo Abe's fatal shooting originally planned to kill the head of a religious organization but switched his target after the leader stopped coming to Japan due to the coronavirus pandemic, investigative sources said Wednesday.

Tetsuya Yamagami has told investigators he believed Abe had links with the organization, widely known as the Unification Church, founded in South Korea in 1954 by Sun Myung Moon. Yamagami has said he harbored a grudge against the group because his family's finances were ruined after his mother donated a huge amount of money to the organization.

The 41-year-old has said he switched his target from Hak Ja Han Moon, the founder's widow and leader of the Family Federation for World Peace and Unification, to Abe because she has not been coming to Japan since the outbreak of the coronavirus, according to the sources. 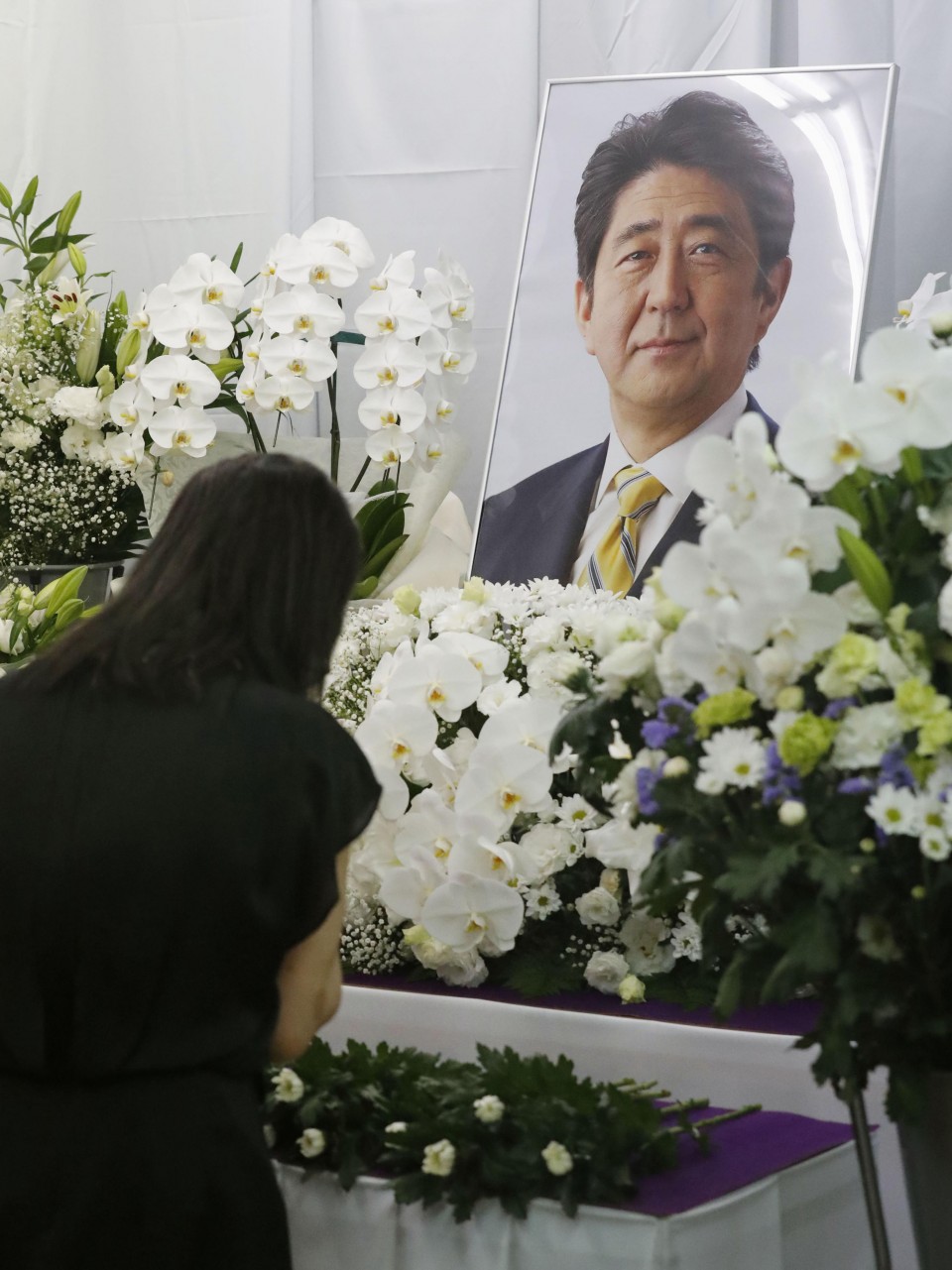 A woman prays in front of a flower stand for slain former Japanese Prime Minister Shinzo Abe in Shimonoseki, Yamaguchi Prefecture, his electoral base, on July 12, 2022. (Kyodo) ==Kyodo

He was also quoted as saying he scrapped a plan to go to South Korea to carry out the killing because he thought he "wouldn't be able to leave the country."

They also revealed that Yamagami claimed to have carried a knife and loitered around locations, including an area where the Unification Church was having a meeting.

Yamagami, a former member of the Maritime Self-Defense Force, has also said he took a Molotov cocktail to the venue of a 2019 gathering attended by Moon in the central Japan prefecture of Aichi, but could not enter, according to the sources. The church says it has no knowledge of him coming to the location.

It is also known that holes appearing to have been made by bullets were found at a multi-level parking lot about 90 meters north of the scene of the shooting last Friday while Abe was on the campaign trail in the western city of Nara.

Full records obtained by Kyodo News of the radio communications between members of Nara's emergency services working to save the former prime minister's life showed that they described him as "showing no vital signs" around three minutes after the shooting, at 11:35 a.m. on Friday.

Abe was taken in an ambulance to a rendezvous point with a medical helicopter, which took off with him inside at 12:13 p.m. and arrived at the Nara Medical University Hospital in Kashihara at 12:20 p.m. He was pronounced dead at 5:03 p.m.

Plans to carry out the shooting could have started more than a year ago, as Yamagami told investigators he first began making guns around spring 2021, initially setting his sights on the Unification Church leader.

But amid coronavirus travel restrictions, Yamagami said he found a video message online from Abe to a September event hosted by a group affiliated with the religious organization, investigators said earlier this week. It appears he watched the video around March or April, they said.

Yamagami has told police the attack was not motivated by Abe's politics but believes that Abe's grandfather, former Prime Minister Nobusuke Kishi, invited the church to start operating in Japan, they said. 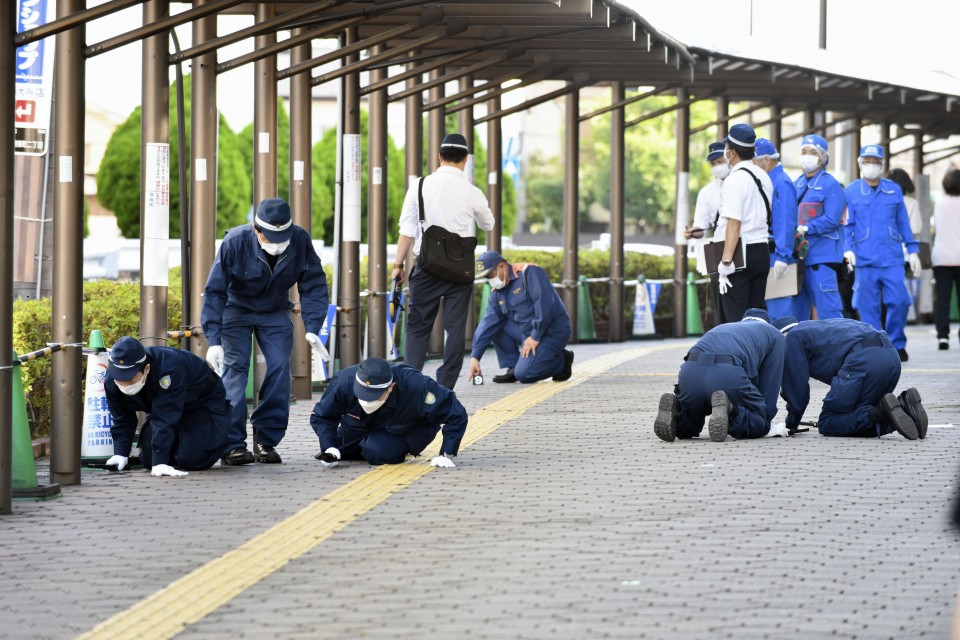 Investigators work the scene of former Japanese Prime Minister Shinzo Abe's assassination in the city of Nara on July 13, 2022. Abe was shot on July 8 during an election campaign speech. (Kyodo) ==Kyodo

Tomihiro Tanaka, president of the church's Japan branch, recently confirmed that Yamagami's mother became a follower around 1998 and that the family suffered financial ruin sometime around 2002. Tanaka also said that neither Abe nor Yamagami were members of the church, which is famous for mass weddings.

Yamagami used a homemade gun to shoot Japan's longest-serving leader on the street. He was arrested at the scene and sent to prosecutors Sunday on suspicion of murder.

Local police on Wednesday conducted an evidence sweep at the scene of the shooting, with around 50 officers mobilized for about two hours from 5 a.m. near Kintetsu Railway's Yamato-Saidaiji Station to search for pellets fired from the homemade gun.

Abe's security detail is also under scrutiny. Itaru Nakamura, head of the National Police Agency, said Tuesday that the attack exposed flaws in the protection of dignitaries and that police failed to guard the former prime minister.

Yamagami approached Abe from behind to fire twice, first from about 7 meters away before shooting three seconds later from about 5 meters away, according to the sources.

The homemade weapon, akin to a shotgun, was composed of two metal pipes held together with duct tape and designed to fire six projectiles at a time. Sources reported that Yamagami said he watched YouTube videos on how to make guns.

The weapon used to shoot Abe was confirmed to have fired small plastic shells containing pellets. A large number of plastic shells for use in such weapons were also found at Yamagami's home, according to the sources.