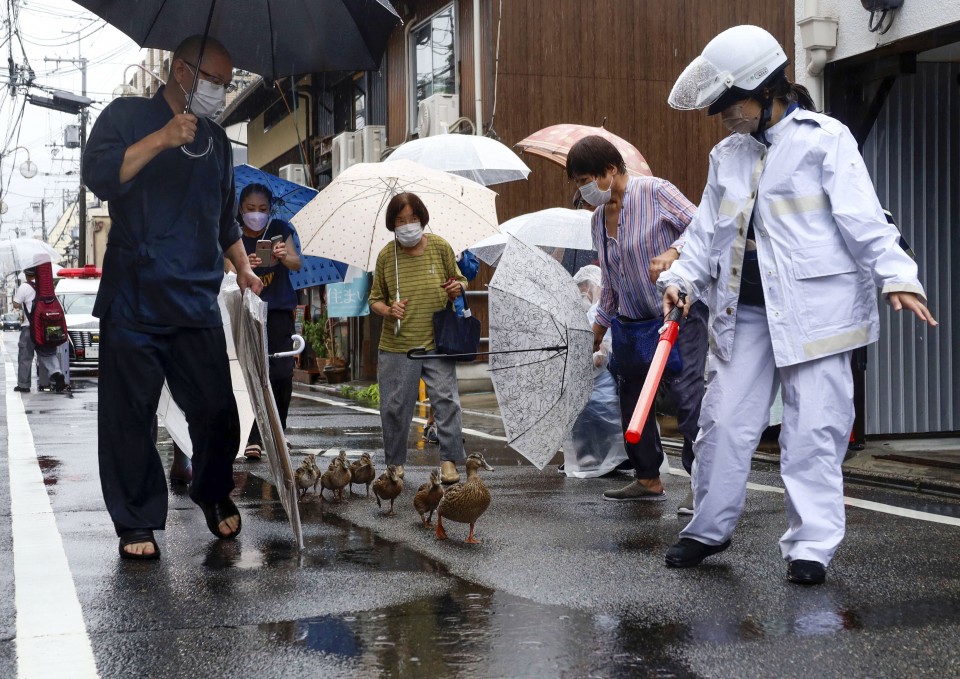 A mother duck and her ducklings are on their way to the Kamo River in Kyoto on July 3, 2022. (Kyodo) ==Kyodo

But the operator of the "au" mobile phone service did not have a firm timetable set for complete service restoration as of 4 p.m.

TOKYO - Chinese and Russian warships were spotted Monday just outside Japanese territorial waters around the Senkaku Islands in the East China Sea, the government said.

A Chinese frigate sailed in the so-called contiguous zone of the uninhabited islets, which are Japanese-administered but claimed by Chinese, for about six minutes from 7:44 a.m., shortly after a Russian frigate entered the waters, according to the Defense Ministry. Beijing calls the islets Diaoyu.

"The two countries should make efforts and combine their wisdom to build a future-oriented partnership," Yoon told Masakazu Tokura, the leader of the Japan Business Federation, in their meeting in Seoul.

Typhoon Aere was moving north in the East China Sea on Monday but is projected to move eastward, possibly bringing torrential rains to Kyushu and other western parts of the country through Wednesday, according to the Japan Meteorological Agency.

TOKYO - The government has set up a research group to investigate issues including body image attitudes and diet and lifestyle habits, as part of attempts to lower the high proportion of underweight young adult women in Japan, the health ministry said Monday.

Being underweight puts individuals' health at greater risk, and can present dangers to newborn children, so the Ministry of Health, Labor and Welfare intends to use the group's findings to improve understanding of the importance of maintaining a normal weight by spreading awareness on the risks of excessive and unbalanced diets.

SYDNEY - Australian Prime Minister Anthony Albanese has made a surprise visit to Ukraine and pledged a further A$99.5 million (US$67.7 million) in military assistance in response to Russia's "illegal" invasion of the neighboring country.

ROME - Funa Nakayama led an all-Japanese podium sweep in the women's event at the World Street Skateboarding Pro Tour leg in Rome on Sunday, with Momoji Nishiya and Yumeka Oda filling the other two places.

It was the first major international victory for the 17-year-old Nakayama, the bronze winner at the Tokyo Olympics, who totaled 264.13 points. Tokyo gold medalist Nishiya finished second with a combined score of 255.64 points, followed by Oda who had 254.91 points.