South Korean President Yoon Suk Yeol told a Japanese business leader Monday that South Korea and Japan must work together to address pending issues that have strained their bilateral ties.

"The two countries should make efforts and combine their wisdom to build a future-oriented partnership," Yoon told Masakazu Tokura, the leader of the Japan Business Federation, in their meeting in Seoul.

Under the previous administration of South Korean President Moon Jae In, bilateral ties deteriorated over disputes dating back to Japan's 1910-1945 colonial rule of the Korean Peninsula, followed by Tokyo's export curbs against Seoul, which weighed on economic cooperation. 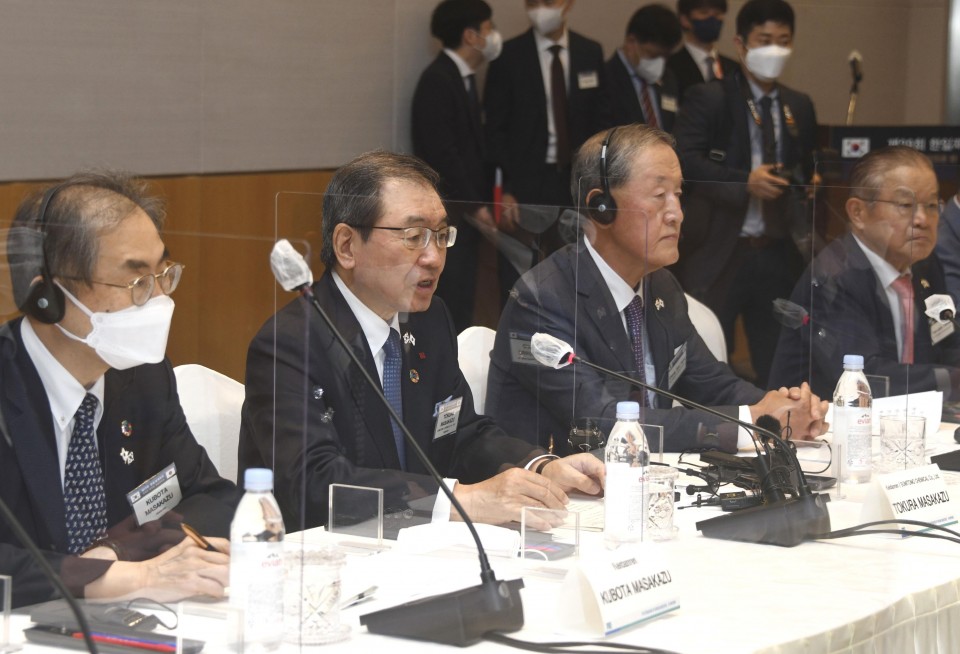 The FKI and the Japanese lobby, also known as Keidanren, reached the agreement during the meeting in Seoul, the first in nearly three years due to the coronavirus pandemic.

In a statement, the two advocated an active role by the private sector to improve bilateral ties based on the spirit of a 1998 declaration made by then South Korean President Kim Dae Jung and then Japanese Prime Minister Keizo Obuchi.

The business leaders also agreed on the importance of normalizing private-sector exchanges by resuming visa exemptions between the two countries that have been limited due to concerns about the spread of COVID-19.

As Russia's war against Ukraine has destabilized situations in the Indo-Pacific region and other areas, the statement said it is vital for Seoul and Tokyo -- two countries that share universal values, such as democracy and a market economy -- to maintain and develop bilateral ties, which would contribute to peace and stability in Northeast Asia.

South Korean business leaders asked for the support of their Japanese counterparts in Seoul's bid to join the revised Trans-Pacific Partnership, according to Yonhap News Agency.

The TPP, or the Comprehensive and Progressive Agreement for Trans-Pacific Partnership as it is formally known, is an 11-member free trade agreement involving Japan, Australia, Canada, Singapore and other regional economies.

Speaking at the meeting, Huh said, "We must upgrade the declaration (by Kim and Obuchi), which looks to the future instead of the past, and emphasizes cooperation in all fields to fit the present."

Yoon, who had several encounters with Kishida during their attendance at the North Atlantic Treaty Organization summit last week, has been showing a strong willingness to improve the bilateral ties frayed over the disputes, namely the issue of "comfort women" procured for Japan's wartime military brothels and compensation demands from South Koreans over wartime labor.

The two business organizations have had regular meetings since 1983, while the last meeting was held in Tokyo in 2019.