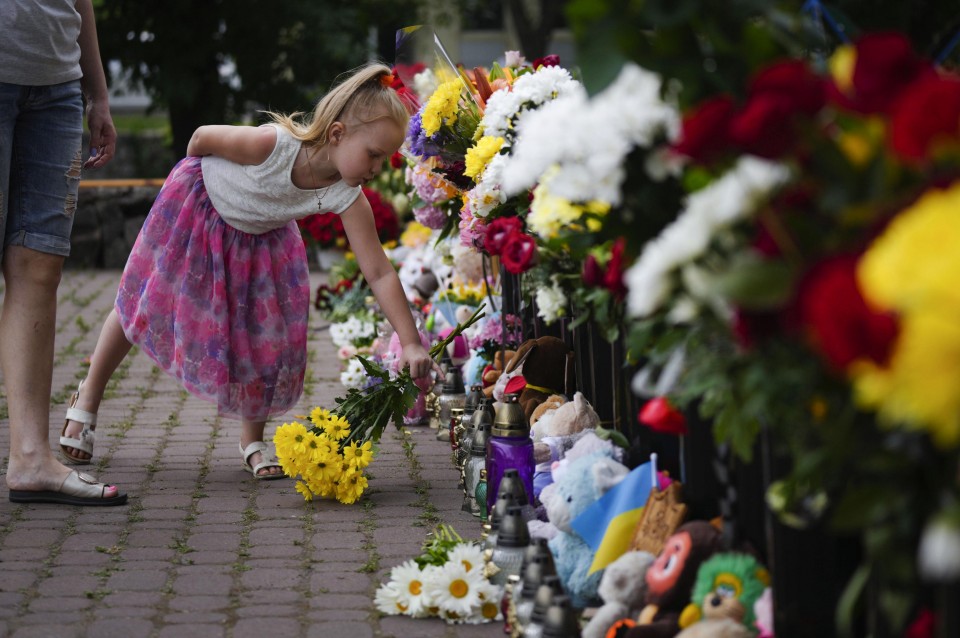 A girl lays flowers on June 29, 2022, at a square near a shopping center, hit by a Russian missile attack two days before, in Kremenchuk, Ukraine. (Kyodo) ==Kyodo

TOKYO - Japanese households and businesses on Friday entered a three-month period to conserve electricity to prevent a power crunch amid a record-breaking heat wave, marking the first time in seven years that the government has made such a request.

Unusually hot weather in June has kept power demand extremely high, with supply expected to remain tight throughout the summer due to persistent heat and infrastructure issues.

HONG KONG - Chinese President Xi Jinping called his country's governance of Hong Kong a success on the 25th anniversary Friday of the handover of the former British colony as he attended a ceremony marking the special administrative region's transition into a new era under Beijing's tightened grip.

The key index measuring sentiment among companies such as automakers and electronics makers dropped to 9 from 14 marked three months earlier. It was below the average market forecast of 13 in a Kyodo News survey.

TOKYO - Japan's unemployment rate rose to 2.6 percent in May from 2.5 percent in April, marking the first increase in four months, the internal affairs ministry said Friday, as people searched for new jobs amid the gradual economic recovery from the coronavirus pandemic.

The job availability ratio stood at 1.24, up 0.01 point from the previous month, showing an improvement for the fifth straight month, the labor ministry said separately. The ratio means there were 124 job openings for every 100 job seekers.

TOKYO - The average land price in Japan as of Jan. 1 was up 0.5 percent from a year earlier, the National Tax Agency said Friday, rebounding from a fall in 2021 as the country recovers from the coronavirus pandemic.

While 20 of the country's 47 prefectures saw increases, 13 more than in 2021, prices continued to fall in others, especially tourist and commercial areas hit by diminished inbound travel.

TOKYO - With Russia's war on Ukraine setting alarm bells ringing in Japan about an assertive China, the defense budget has become one of the key issues in the House of Councillors election on July 10.

Polls show that the public is split on an increase in defense spending with a Kyodo News survey conducted from Sunday to Tuesday showing 47.8 percent of voters think the budget should be expanded to 2 percent or higher of the gross domestic product as the ruling Liberal Democratic Party has suggested, while 45.8 percent want spending to stay as it is or cut.

TORONTO - Yusei Kikuchi put together a quality start Thursday, earning his first win in over six weeks for the Toronto Blue Jays in a 4-1 victory over the Tampa Bay Rays.

Having lost three of his seven starts since his previous win on May 16, Kikuchi (3-4) leaned heavily on his effective changeups, striking out a season-high eight batters while allowing one run on four hits and a walk.