Chinese President Xi Jinping called his country's governance of Hong Kong a success on the 25th anniversary Friday of the handover of the former British colony as he attended a ceremony marking the special administrative region's transition into a new era under Beijing's tightened grip.

John Lee, a former No. 2 official of Hong Kong, became the territory's chief executive, beginning his five-year term at the halfway point of Beijing's Hong Kong administration policy, which was put in place in 1997 and is set to last for 50 years until 2047.

A national security law enacted by Beijing in 2020 and an amended electoral system in the city ensured the "implementation of the principle of patriots administering Hong Kong," Xi said. 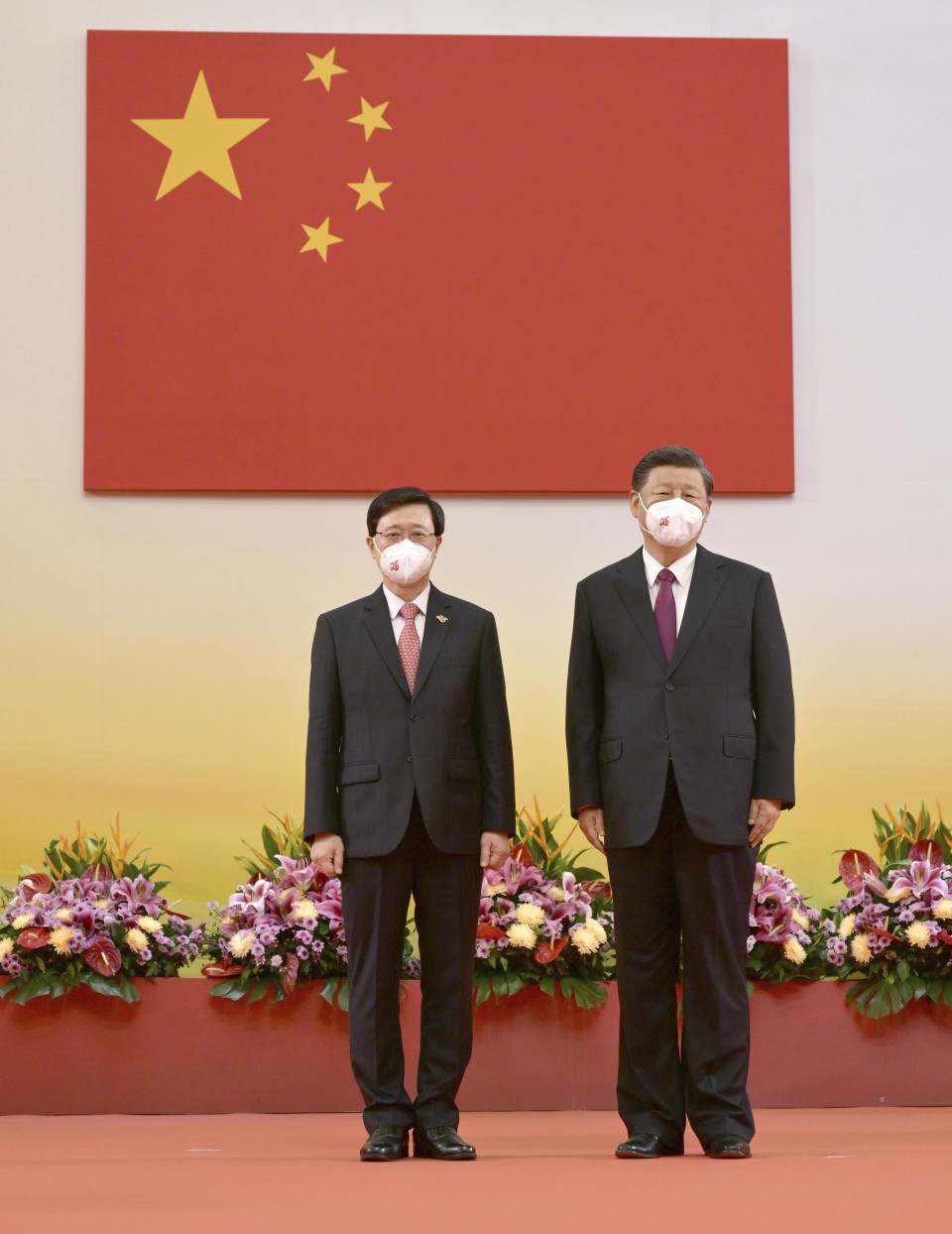 Hong Kong's new Chief Executive John Lee (L) and China's President Xi Jinping are pictured on July 1, 2022, in Hong Kong at a ceremony commemorating the 25th anniversary of the city's handover from Britain to China. (Photo courtesy of the Hong Kong government)(Kyodo)

"No people in any country or region in the world will ever allow political power to fall into the hands of forces or individuals who do not love or would even sell out or betray their own country," he said.

By safeguarding the city's role as an international financial and trade hub, the Chinese government "fully supports" Hong Kong's maintenance of a "free, open and sound business environment," Xi added.

Xi last visited Hong Kong in 2017 for the swearing-in ceremony of Lee's predecessor Carrie Lam on the 20th anniversary of the handover of the region.

Lee, known as a staunch supporter of cracking down on pro-democracy activists, has vowed to maintain social order in the region based on the national security law.

"I will strive to comprehensively and accurately implement the principles of 'one country, two systems,'" he said in his inauguration speech.

Hong Kong police ramped up security measures ahead of Xi's two-day visit from Thursday, with a heavy police presence deployed throughout the city to ensure it goes smoothly.

The police also set up a core security zone in areas that Xi was scheduled to visit, closing off roads and some public transport, as well as implementing a no-fly zone for drones throughout the city.

Authorities have restricted media coverage of the events, inviting only selected organizations to cover the ceremony. Several local and international media outlets were barred from attending.

In past years, Hong Kong saw an annual July 1 pro-democracy rally in the city, which was banned for a second consecutive year in 2021 due to public health concerns amid the coronavirus pandemic.

The police confirmed in a press conference Tuesday that they had not received any notice about public events or rallies, and the streets remained quiet.

However, Assistant Police Commissioner Lui Kam-ho said that the police remain "highly concerned" about the possibility of local terrorism.

"We will not tolerate anything that may interfere and undermine the security operation," Lui said.

He said the police will take resolute action if anyone undermines public order or threatens public safety.

Despite ramped-up security efforts, however, Hong Kong citizens have remained indifferent to the day's events.

A white-collar worker in Hong Kong called Xi's visit a "nuisance to citizens," adding that the "one country, two systems" principle is practically non-existent.

"If President Xi hadn't praised the system in his speech, I would have almost forgotten that there is such a system," he said.

Others expressed cynicism toward the future of Hong Kong as it enters into a new era of governance.

Asked about thoughts on the "one country, two systems" policy, a 26-year-old woman called it a tactic to appease Hong Kong citizens.

"The Basic Law said that it would gradually move toward universal suffrage, but now it says 'patriots administering Hong Kong,'" she added, referring to the region's constitutional document that came into effect in 1997 following an agreement between China and Britain.

"I feel that Hong Kong will only get worse."