Friday marks one year since Hong Kong's pro-democracy newspaper Apple Daily ceased operating after 26 years in circulation, with increasing concerns over press freedom in the city.

Known for its stance of upholding democracy and fearless criticism of the Chinese Communist Party, Apple Daily shut down on June 24, 2021, after Hong Kong authorities froze the company's assets and arrested its senior editors and executives, including founder Jimmy Lai, charging them with violating the national security law.

Following the daily's closure amid mounting pressures from the city and Beijing, Hong Kong's media industry has seen sweeping changes along with a shifting political landscape as the former British colony prepares for the inauguration of John Lee as its new leader next week.

Lee, the city's former security chief, will be sworn in on July 1, the 25th anniversary of Hong Kong's handover from Britain to China, but several local and international media, including Kyodo News, have been barred from covering the inauguration ceremony, with the city government inviting only selected organizations to cover the event. 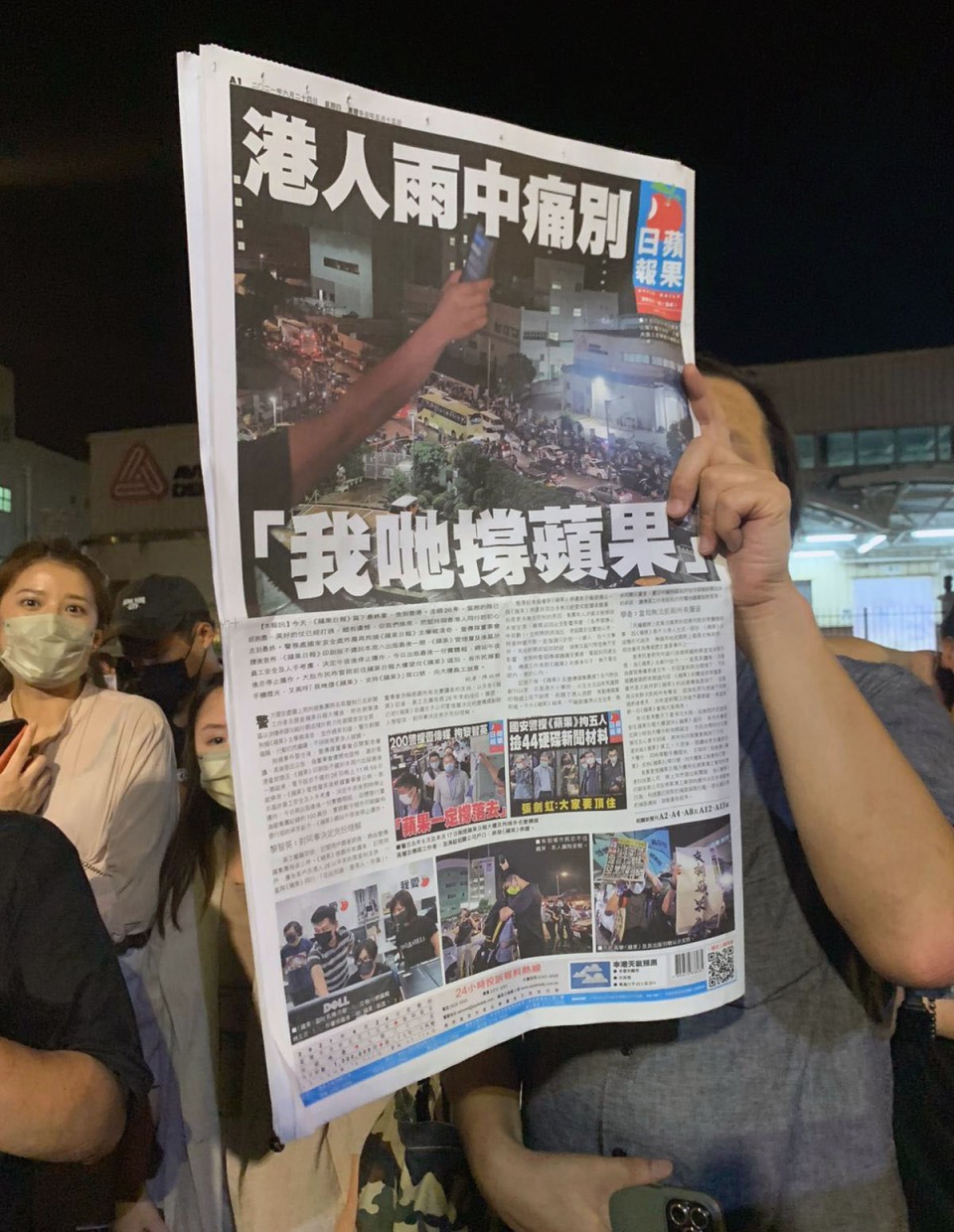 The government has cited security concerns, venue constraints and public health risks amid the coronavirus pandemic as reasons for the restrictions on media, leading to speculation that this could be an excuse to exclude certain news outlets.

"Media freedom means a lot of things, but most importantly, it means access," Richburg said. "They shouldn't be restricting access to anybody for this sort of thing, and they should stop hiding behind COVID rules to...restrict media from coming in," he added.

The Hong Kong government has repeatedly asserted that press freedoms remain intact under the national security law enacted on June 30, 2020. The law criminalizes acts of secession, subversion, terrorism and collusion with foreign forces.

In April, Lee denied the need to defend press freedom, saying it is protected by law. Last week, he spoke at an event and stated that press freedom is "unlimited," provided journalists do not breach the law.

But critics argue that press freedom in the semiautonomous region is facing a bigger threat than ever despite being guaranteed in the Basic Law, Hong Kong's miniconstitution.

The unprecedented fall could be attributed to the shutdown of Apple Daily and subsequent closures of several major pro-democracy media.

In December, independent media platform Stand News ceased operations after police raided its offices and arrested several individuals linked to the organization on suspicion of conspiracy to disseminate seditious publications.

Just days after, the online news portal Citizen News announced that it would fold, with chief writer Chris Yeung citing the crackdown on Stand News as a reason for his outlet's closure as it could not rule out the possibility that its employees could be exposed to legal risks.

Earlier this month, independent news platform FactWire announced its disbandment, making it the latest outlet to fold within a year following the closure of Apple Daily.

Also, this month, the Reuters Institute for the Study of Journalism released a report saying press freedom in Hong Kong is facing "unprecedented strain," citing the ambiguity of the wide-ranging national security law that has been used for crackdowns on news outlets critical of the Hong Kong and the mainland governments.

The report also mentioned the government-mandated overhaul of public broadcaster RTHK, whose coverage of large-scale protests against an extradition bill in 2019 was criticized by the authorities.

RTHK saw a major reshuffling of staff and an abrupt cancellation of several programs over the past year. A new set of editorial policies and guidelines emphasized the need for the broadcaster to "identify itself with national interests," according to the report.

A survey by Reuters referred to in the report showed that trust in RTHK has steadily decreased over the past two years, falling by 6 percentage points compared to figures from 2021 and 10 percentage points from 2020 as the government increasingly asserted its authority over the organization.

With Hong Kong's media industry facing mounting pressures from the authorities, an annual award for outstanding reporting on human rights issues was canceled in April, following a 25-year-run, a move observers see as a further blow to the city's once-guaranteed freedom of the press.

The Foreign Correspondents' Club, which hosts the award, has cited "significant areas of uncertainty" under the national security law as the reason for the cancellation, expressing concerns that the award could lead to a violation of the law.

Shibani Mahtani, who served on the award committee for three years, resigned after the cancellation, stating that she did not stand by it.

In a Twitter post, Mahtani said the decision showed that the club might not be able to serve its core purpose of defending and promoting the press any longer.

"It is emblematic too of the self-censorship many institutions feel forced to subject themselves to in today's Hong Kong, whether with or without their merits and entirely indicative of how the national security law has changed the landscape for all," she added.