Foreign ministers from the Group of Seven major developed countries on Monday expressed "grave concern" over Hong Kong's leadership selection process a day after the semi-autonomous city picked its next chief executive in an uncontested election.

Referring to the selection of John Lee, former security chief of the city, as the next leader, the ministers released a statement saying the "process and resulting appointment are a stark departure from the aim of universal suffrage and further erode the ability of Hong Kongers to be legitimately represented." 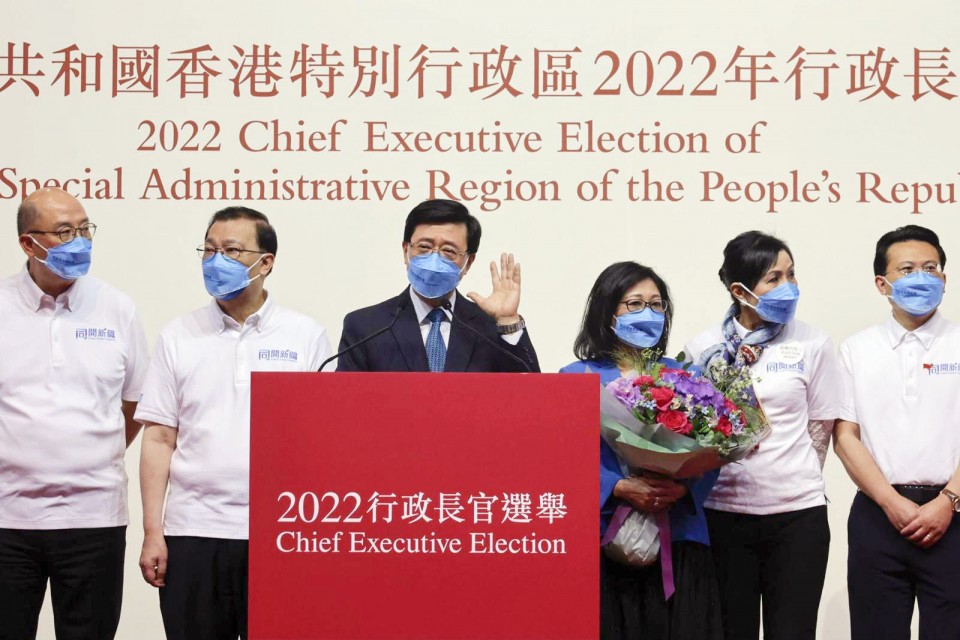 John Lee (3rd from L) makes a speech after being selected as Hong Kong's next chief executive on May 8, 2022. (Kyodo)

Sunday's election was conducted in a secret ballot by Hong Kong's Election Committee of around 1,500 members. Lee, endorsed by Beijing and the only candidate in the poll, won with 99 percent of the votes.

In the statement, the top diplomats of the seven countries, including Britain, Japan and the United States, as well as the European Union, said they are concerned about the "steady erosion of political and civil rights and Hong Kong's autonomy."

They called on China to "act in accordance with the Sino-British Joint Declaration and its other legal obligations."

Under China's "one country, two systems" policy, Hong Kong was promised it would enjoy the rights and freedoms of a semi-autonomous region for 50 years following its return to the mainland in 1997.

But in late June 2020, China enforced a controversial national security law for Hong Kong to crack down on what it regards as secession, subversion, terrorism and collusion with foreign forces.

Lee served as the city's secretary for security before being elevated to chief secretary for administration, the No. 2 post in the territory, in June 2021.

The 64-year-old is due to replace current leader Carrie Lam on July 1, the 25th anniversary of Hong Kong's reversion to Chinese rule from Britain.