Japanese households and businesses on Friday entered a three-month period to conserve electricity to prevent a power crunch amid a record-breaking heat wave, marking the first time in seven years that the government has made such a request.

Unusually hot weather in June has kept power demand extremely high, with supply expected to remain tight throughout the summer due to persistent heat and infrastructure issues.

While a numerical target has not been set for the period through September, the government is calling for people to reduce energy consumption without disrupting daily life and economic activities. 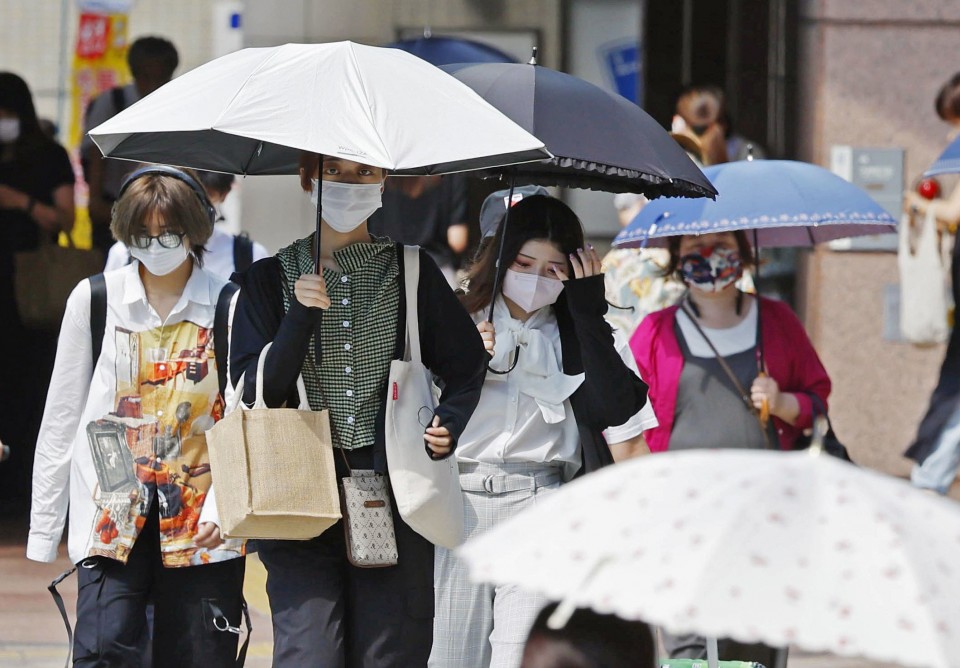 People walk with parasols under the scorching sun in Fukuoka, southwestern Japan, on July 1, 2022. (Kyodo) ==Kyodo

Some business operators said their contribution to the energy conservation request might be limited, taking the well-being of their customers and employees into account, while others said they will adhere to the measures as much as possible.

"The only thing we can do is to turn off the lights as much as we can in staff-only areas," a spokesperson at a major restaurant chain said, adding that it would be difficult to ask customers to dine with the air conditioner set at higher temperatures.

A spokesperson at a food manufacturer also said that the company has no plan to reduce power consumption for air conditioning, considering its employees' health conditions while working at factories.

Still, Kei Iida, 33, who runs a small hotel with six guestrooms in Okazaki, Aichi Prefecture, said he had taken a step, asking his guests to turn off the air conditioners when they leave their rooms.

The Japanese archipelago has endured record-high temperatures over the past few days, with the highest temperatures for the month of June recorded in 338 out of 914 locations across Japan, according to the weather agency.

On Friday, the mercury reached or eclipsed 40.0 C in a record six locations, including Kiryu, Gunma Prefecture, with the scorching temperatures expected to persist.

In central Tokyo, the mercury reached 37.0 C in the morning, surpassing the country's "extreme heat" threshold of 35 C for the seventh consecutive day.

Some 1,517 people had been taken to hospitals, and 17 died from suspected heat stroke or heat exhaustion in the capital in June, with both figures marking the highest since comparable data became available in 2010, according to the Tokyo Fire Department and the Tokyo Metropolitan Government's Medical Examiner's Office.

Due to the heightened risk of heatstroke, the Ministry of Economy, Trade and Industry is calling on people to continue using air conditioners and instead save electricity via measures such as turning off unnecessary lights.

A government spokesman also urged the people to take off face masks outdoors to prevent heatstroke, as many in the country have continued wearing them since the outbreak of the coronavirus. 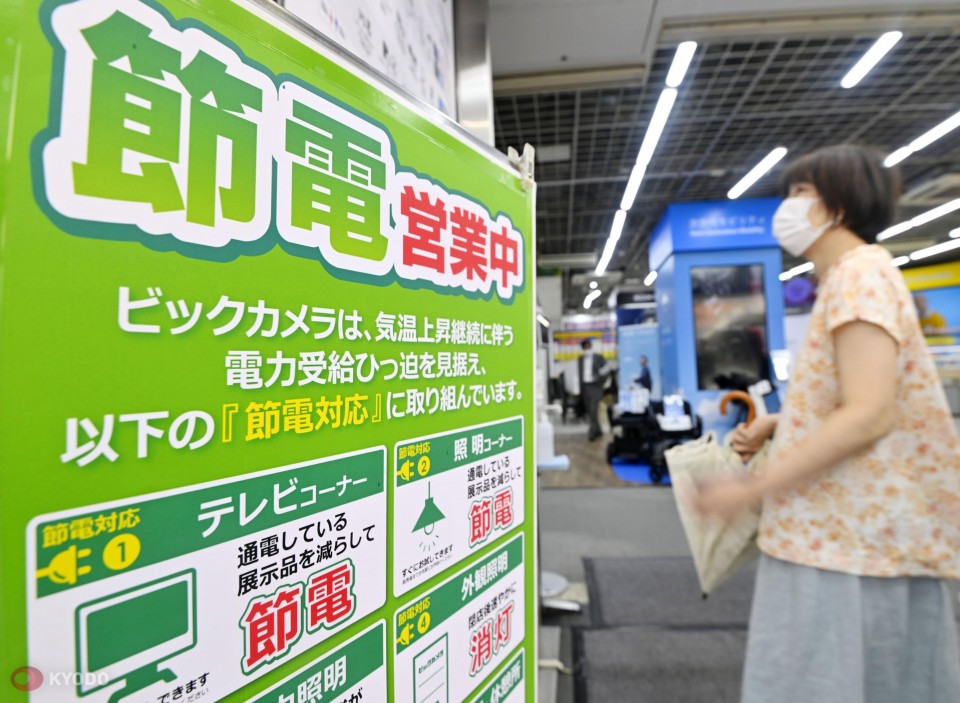 Photo taken June 30, 2022, shows a sign at an electronics store in Tokyo listing energy-saving measures taken in response to the heat wave. (Kyodo)

"We are asking the public to take off the masks except for when talking at a short distance," Deputy Chief Cabinet Secretary Seiji Kihara told a regular news conference.

Energy-saving measures are encouraged between 5 p.m. and 8 p.m. when solar power generation declines.

The ministry issued a power usage warning for four consecutive days from Monday in Tokyo Electric Power Company Holdings Inc.'s service area as sweltering temperatures in the Japanese capital and surrounding areas were expected to result in pressure on the system.

The warning was lifted for Friday as concern over a power crunch eased, but the risk of an electricity shortage remains due to issues such as aging thermal power plants.

On Thursday, the Nakoso coal- and oil-fired power plant in Fukushima Prefecture, northeastern Japan, was temporarily halted due to a technical problem. It partially resumed operation the same day.

Some electricity suppliers will begin a point system in July to reward households that take energy-saving measures. The government has also decided to provide power-saving points in August worth 2,000 yen ($15) to households if they participate.

According to the industry ministry, difficulties procuring fuel for thermal power generation are increasing due to Russia's ongoing invasion of Ukraine, with concerns over a power crunch likely to intensify in winter when solar power generation declines.

The disaster at the Fukushima Daiichi nuclear power plant triggered by the March 2011 earthquake and tsunami led to the suspension of many of the country's reactors, with the government consistently calling for energy-saving measures until 2015.

The government stopped making the requests from 2016 after some nuclear plants resumed operation.