Myanmar's shadow civilian leadership, the National Unity Government, has established a presence in Japan as part of efforts to restore the democratically-elected administration of Aung San Suu Kyi which was overthrown in a February 2021 military coup.

Some Japanese lawmakers are rallying behind the NUG, though Prime Minister Fumio Kishida's government has yet to recognize it for fear that antagonizing the junta would push it into the embrace of Beijing at a time when the rivalry between China and the United States in the Indo-Pacific is intensifying.

The NUG appointed Saw Ba Hla Thein, an ethnic Karen who has long been assisting Myanmar refugees in Japan, as representative to Japan on Feb. 1 to provide an alternative to the junta-controlled Myanmar Embassy in Tokyo. 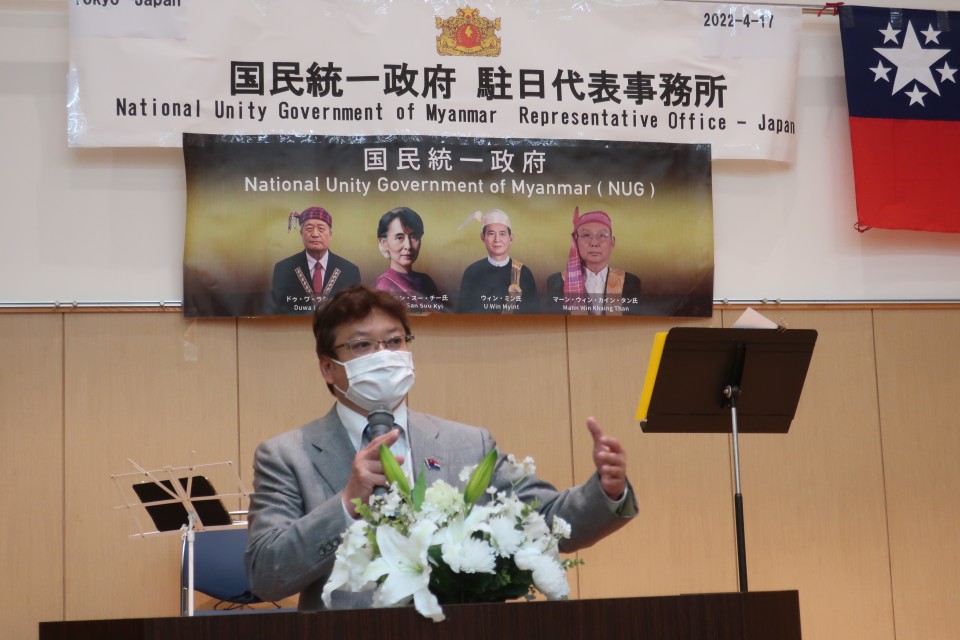 Saw Ba Hla Thein, the Japan representative of Myanmar's shadow civilian government, the National Unity Government, speaks in Tokyo on April 17, 2022 at a meeting to mark the first anniversary of the NUG's founding. (Kyodo)

The NUG was launched in April last year by deposed pro-democracy parliamentarians, anti-coup protesters and ethnic minority leaders who united in opposition to military rule. The organization holds no territory and conducts activities primarily online to avoid being targeted by the military.

Speaking at an event held April 17 in Tokyo to mark the first anniversary of the NUG's founding, Saw Ba Hla Thein said he will urge the Japanese government to recognize the NUG as the legitimate governing body of Myanmar to undermine the junta's control.

Saw Ba Hla Thein declined to say where in Japan the NUG is based, but said its office is staffed by 10 to 20 volunteers and the same number of advisers.

Besides Japan, the NUG has set up representative offices in Australia, Britain, the Czech Republic, France, Norway and South Korea.

The group also has a non-resident ambassador to the Association of Southeast Asian Nations and plans to open an office in the United States, according to the NUG Ministry of Foreign Affairs.

"We will step up political and diplomatic activities to promote the NUG in Japan," Saw Ba Hla Thein said, expressing hope that he can meet with Kishida and Foreign Minister Yoshimasa Hayashi soon.

"We will make our best efforts until we win the fight to rebuild a democratic state," said the 52-year-old, who came to Japan three decades ago and was recognized as a refugee by the Japanese government in 2006. "Democracy and justice will prevail."

Responding to his call, Michihiro Ishibashi, a lawmaker from the main opposition Constitutional Democratic Party of Japan, requested the Kishida government, in coordination with the United States, Europe and ASEAN, step up pressure on the Myanmar military to immediately halt violence, free Suu Kyi and other detainees, and restore democracy.

The request by Ishibashi, who serves as executive director of the Japanese Parliamentary Group Supporting Democratization in Myanmar, mirrors the cause of the NUG.

Since the Feb. 1, 2021, coup, Myanmar's military, led by army chief Min Aung Hlaing, has killed over 1,800 peaceful demonstrators and other citizens and left some 560,000 people displaced, according to U.N. and other data.

Suu Kyi has been convicted on several charges, including incitement, a move her supporters and independent analysts say has been used by the junta as a pretext to legitimize the military takeover of the government and prevent the Nobel Peace Prize laureate from returning to politics.

"We will continue to push the Japanese government to recognize the NUG as the government representing the people of Myanmar and establish diplomatic relations with it," Ishibashi told the April 17 event.

Together with Ishibashi and Ichiro Aisawa, a ruling Liberal Democratic Party lawmaker and chairman of the Japan-Myanmar Parliamentary Friendship Association, Myanmar residents in Japan and Japanese supporters have set up a nonprofit organization to provide food and medical aid to impoverished and displaced people in Myanmar.

The NPO, to be fully operational on June 1, will also lobby the Japanese government and companies to back the NUG.

Japanese companies Eneos Holdings Inc. and Kirin Holdings Co. have already announced their withdrawal from natural gas and beer brewing projects, respectively, in Myanmar so revenues would not be diverted to the military.

Despite the NUG's call for recognition, China's engagement with the junta is making it difficult for Japan to leverage pressure on senior Myanmar generals, or even sever ties with them. Japanese officials and diplomats have, however, attempted to persuade the military to reverse course.

In a meeting with the junta's foreign minister Wunna Maung Lwin on April 1, Chinese Foreign Minister Wang Yi said Beijing, a major arms supplier, aid donor and trading partner, will "strengthen coordination with Myanmar to help overcome difficulties," an apparent signal of support for the junta.

The meeting in China's Anhui Province came five days after Min Aung Hlaing said he would not negotiate with "terrorist" forces, in reference to the NUG and the anti-junta People's Defense Force, and vowed to "annihilate" them.

Zin Mar Aung, the NUG's foreign minister, grasps Japan's dilemma in conducting diplomacy regarding Myanmar, saying, "Japan is concerned China might fill a vacuum if it refuses to engage with the regime. It is a balancing act."

"Asian countries accept the principle" of rejecting the military regime, Zin Mar Aung was quoted as saying in an interview with the independent Myanmar media outlet The Irrawaddy.

"But in reality, they do not take a tough stance and maintain ties with both the regime and us," she said in the interview posted April 1. "We have to monitor their moves and engage with them."