The new chief of a Myanmar pro-democracy organization in Japan on Sunday called on its people to band together for the Southeast Asian country's shadow government formed after a military coup more than a year ago.

"Let's remember the people who lost their lives through the democracy movement," said Saw Ba Hla Thein, the head of the Japanese representative office for the National Unity Government, before holding a silent prayer at a fund-raising event in a park in central Tokyo, attended by more than 1,000 people. 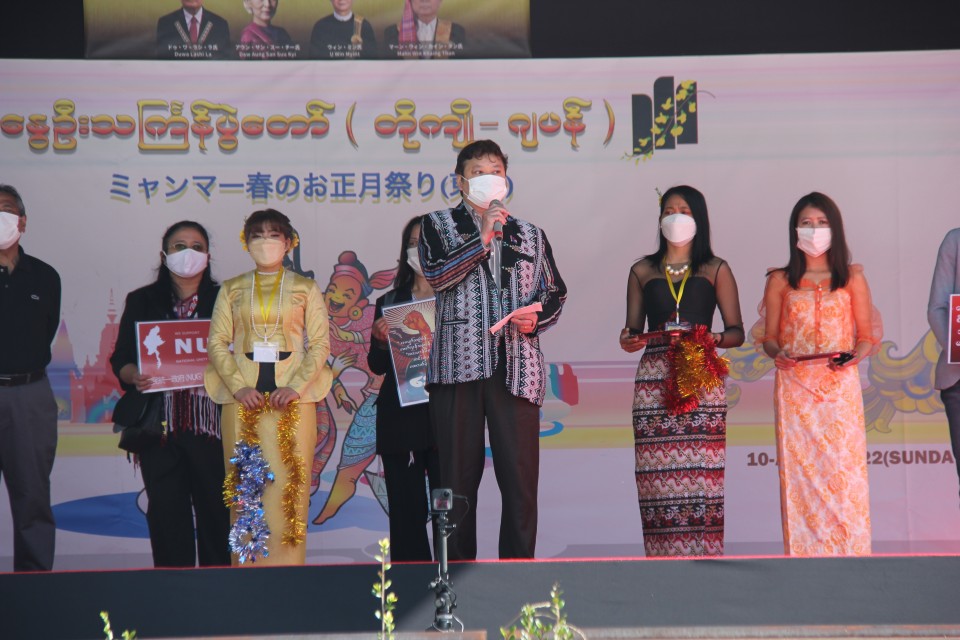 Saw Ba Hla Thein (C), the head of the Japanese representative office for the National Unity Government, speaks at a fund-raising event at a park in central Tokyo on April 10, 2022. (Kyodo)

Having worked on human rights issues for many years, Saw Ba Hla Thein, of Myanmar's Karen ethnic minority, said, "I really want people in Japan to support the NUG and its Japan office" in his first major public appearance since assuming the top post in February.

The NUG is ramping up its efforts to gain recognition as Myanmar's legitimate governing body to restore democracy in the country now controlled by the military, following years of a quasi-democracy.

It has set up offices in multiple countries outside Myanmar, including Australia, the Czech Republic, France, South Korea and the United States.

Formed two months after the coup on Feb. 1 last year, the NUG is mostly comprised of members of the National League for Democracy party led by Aung San Suu Kyi. The party won majority seats in parliament in the 2020 general election before being forced out of the country's leadership by the military junta.

Suu Kyi, who has been detained again by the military since then, serves as state counselor under the shadow government, along with its president Win Myint. 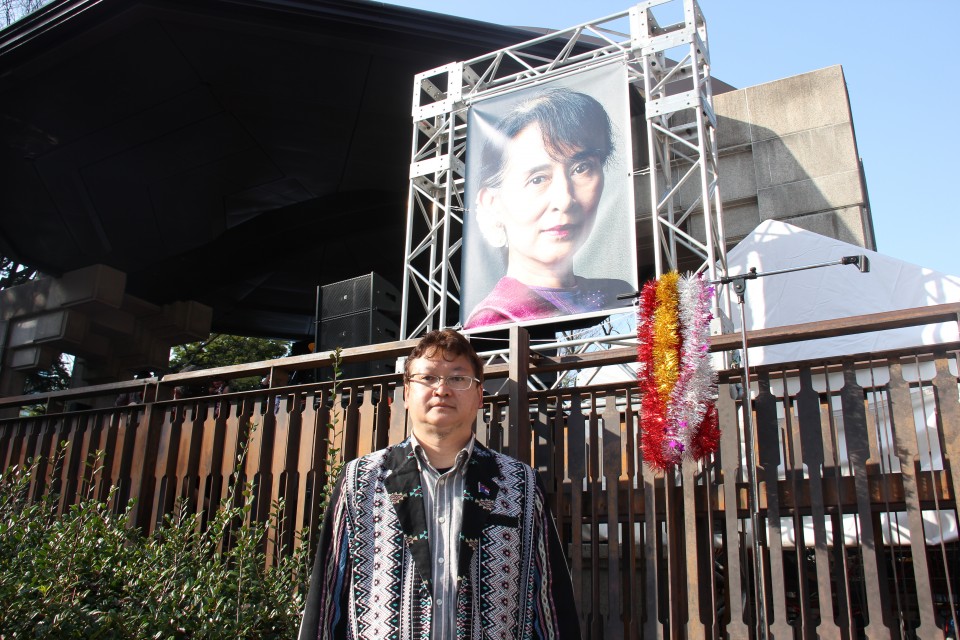 Saw Ba Hla Thein, the head of the Japanese representative office for the National Unity Government, stands in front of a picture of Aung San Suu Kyi at a fund-raising event at a park in central Tokyo on April 10, 2022. (Kyodo)

Since the coup, Myanmar's military has killed about 1,700 peaceful demonstrators and other citizens and left some 520,000 people displaced, most of whom are women and girls, according to U.N. and other data.

While reports of atrocities in Ukraine following Russia's invasion in late February have drawn much attention from the international community, supporters of the shadow government say that the junta's ongoing acts of brutality toward civilians in Myanmar should not be overlooked.

"I hope more and more Japanese people take an interest in democratization in Myanmar," said the NUG group's new leader, who came to Japan three decades ago and was recognized as a refugee by the Japanese government in 2006.