A group of Myanmar residents in Japan has launched a crowdfunding campaign to support compatriots who evacuated their homes or lost their jobs due to the military coup last year.

As the world closely watches Russia's aggression in Ukraine, the group is calling on Japan and other countries not to forget the suffering of the Myanmar people, saying the humanitarian crisis in the Southeast Asian country is only getting worse.

The group aims to raise a total of 10 million yen ($84,000) by April 30, targeting about 1,000 households who are internally displaced in Myanmar, 200 civil servants the junta sacked for opposing the coup, as well as 100 doctors and nurses taking care of affected people. 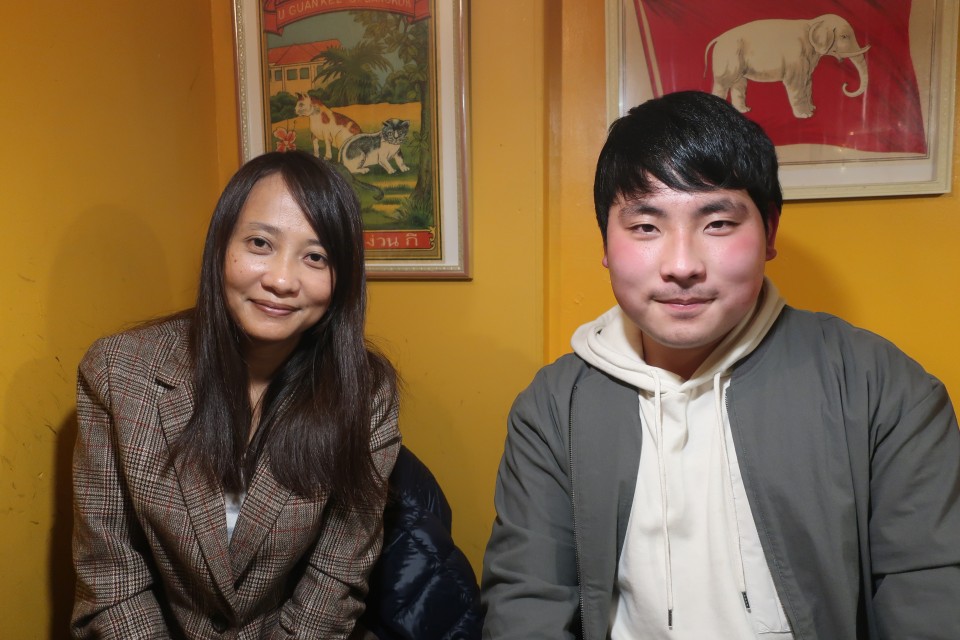 Misaki Otsuki (L), a Myanmar resident in Japan and organizer for a crowdfunding campaign to support affected people in coup-hit Myanmar, and Wataru Ishikawa, co-leader of the Japan Myanmar Future Creative Association, speak in an interview with Kyodo News on March 20, 2022, in Tokyo. (Kyodo)

"We have received assistance from Japan through similar schemes, but we decided to extend food and medical aid to those in urgent need with our own initiative," says Misaki Otsuki, a Myanmar woman and organizer for the project who wishes to be identified by her Japanese name.

The first crowdfunding project by Myanmar residents in Japan had raised over 5 million yen from about 500 people as of Monday. The group is accepting contributions, ranging from 3,000 to 1 million yen, via the website: https://readyfor.jp/projects/freemm2022.

"People in Japan and elsewhere seem to be paying less attention to Myanmar as the conflict between the military and anti-junta forces has lasted for more than a year," Otsuki, a Tokyo resident who works for a Japanese company, said in an interview. "And we are now seeing Russia's aggression in Ukraine."

"Ukraine and Myanmar have something in common -- citizens are oppressed by force," she said. "Since this is a project to support Myanmar, we would like to express solidarity with Ukraine, whose people -- just like citizens in Myanmar -- are robbed of their freedom and peaceful lives by violence."

Since the Feb. 1, 2021 coup, Myanmar's military has killed about 1,700 peaceful demonstrators and other citizens and left some 520,000 people displaced, a majority of whom are women and girls, according to U.N. and other data.

Thomas Andrews, the U.N. special rapporteur on the human rights situation in Myanmar, said in February that Russia and China continue to provide the junta with fighter jets, armored vehicles and other weapons it uses to attack civilians, and has requested the Security Council halt the flow of arms enabling atrocities. 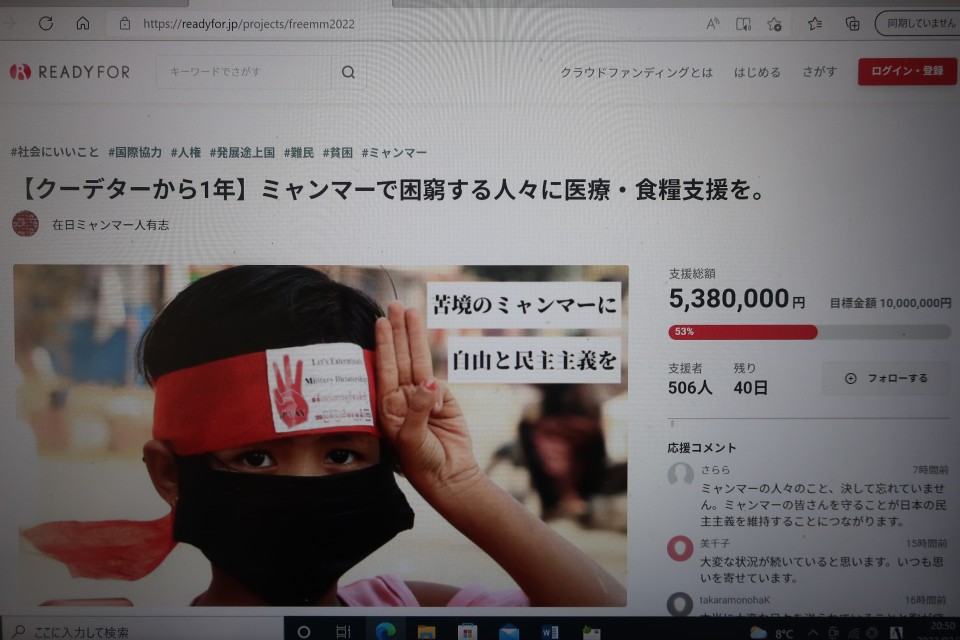 A screenshot of the website for a crowdfunding campaign a group of Myanmar residents in Japan launched on March 1, 2022 to support affected people in coup-hit Myanmar (Kyodo)

"It is no surprise that junta chief Min Aung Hlaing backs Putin's war in Ukraine," said Ishikawa, a Tokyo University of Foreign Studies student who is also involved in the crowdfunding campaign. "It is a deal between dictators. Citizens in Myanmar think otherwise."

Ishikawa and Otsuki hope more people in Japan and other countries will join the project, which will be implemented in partnership with Myanmar's National Unity Government, an organization launched in April last year by deposed pro-democracy parliamentarians, anti-coup protest leaders and representatives of ethnic minority groups in opposition to military rule.

"More than a year has passed since the military detained our leader Aung San Suu Kyi and toppled her democratically elected government, and the situation is only getting worse," Otsuki said, citing sharp deterioration in the economy and surging prices of food, fuel and other commodities.

The U.N. Development Program estimates nearly half of Myanmar's population will live in poverty in 2022.

"We fully understand the world is focusing on how to end the war in Ukraine and assist affected people there," Otsuki said. "But we would like to tell the world, 'Never forget the tragedy in Myanmar. Please help us restore our peaceful lives and regain hopes for a bright future under the democratic government.'"