Since East Timor gained independence in 2002, long queues of young East Timorese at the Embassy of Portugal, the country's former colonial power, to get Portuguese passports in an effort to find jobs in Europe, have been a common view.

Felisberto Soares da Cruz was one of them, standing in the line under the scorching sun, just a couple days before the tiny Asian country celebrated its 20th anniversary of independence from Indonesia on Friday.

While others were enthusiastically joining the celebrations by participating in various fun games inherited from their former ruler Indonesia, da Cruz and other young men were waiting for hours to get the passports. 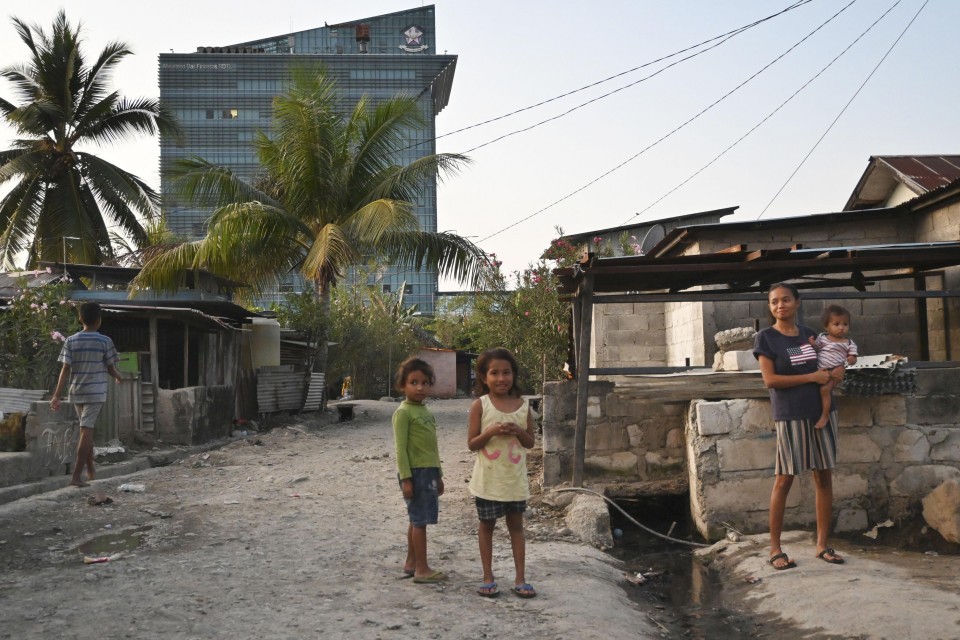 Photo taken on May 15, 2022, shows a family living in a slum area located between the presidential palace and the Ministry of Finance in Dili. (Kyodo)

Every East Timor citizen who was born before the country gained independence is entitled to Portuguese passports. Indonesia annexed East Timor by force in 1976 after it had been under Portuguese colonial rule for about 400 years.

"East Timor lacks jobs," the 34-year-old man said. "The economic condition here is not good and we have been going through a hard life."

Having to support his wife and two children, the former construction worker had no choice but to seek job opportunities in Europe.

He went back and forth to the embassy for the past five years before finally getting an appointment to start the process of his application.

He revealed that the number doubled from the previous year and expressed worries about East Timor's future if the youngsters continuously leave the country.

"I don't know what is going on in our country, but if our young people continue to leave every year, it will be hard for us because we will lose our new generations," he said.

In the town of Liquica, about 33 kilometers away from Dili, similar worries were raised by Jose Menezes Nunes Serrao on the future of his three grown-up children in their 20s who are still in search of proper jobs despite their university degrees.

"I suffered a lot for the independence, so at least, our leaders can help create jobs for them," Serrao said.

The 61-year-old man almost died after having his neck slashed by pro-Jakarta militiamen who ran amok against pro-independence supporters in April 1999 following a decision by then Indonesian President Bacharuddin Jusuf Habibie to hold a referendum for self-determination in East Timor. 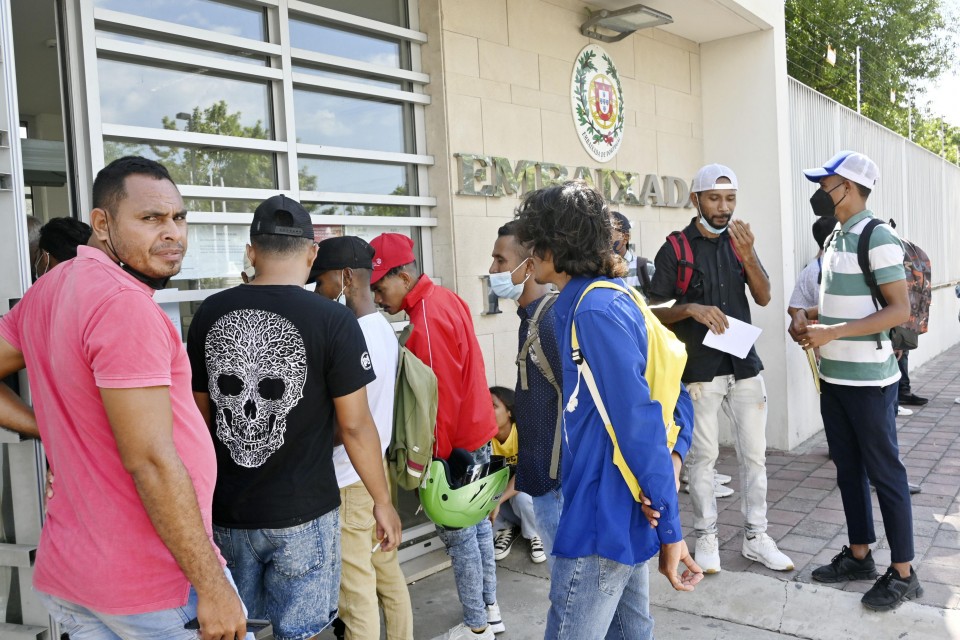 Photo taken on May 18, 2022, shows young East Timorese lining up in front of the Portuguese Embassy in Dili to apply for Portuguese passports in an effort to find jobs in European countries. (Kyodo)

The country formally gained independence after two-and-a-half years under U.N. administration following the August 1999 referendum in which the East Timorese overwhelmingly voted for separation from Indonesia.

Twenty years on, however, unemployment, particularly among the young people, still plagues the nation with a population of 1.37 million as one of its major problems.

According to the International Labor Organization, the country's working-age population is around 725,000, but only about 304,000 are employed. Combined with those underemployed, the unemployment rate is estimated to be as high as 70 percent.

Despite receiving oil and gas revenues since 2005, East Timor remains one of the poorest countries in the Asia-Pacific region. The situation has been getting worse since the coronavirus pandemic hit the former Portuguese colony.

"The level of unemployment has been on the rise (as) companies went out of business or had their revenues reduced," economist Joao Saldanha Soares told Kyodo News.

The pandemic had contributed to the rising number of those living under the poverty line, which was expected to reach about 47 percent of the population last year, he said.

Both da Cruz and Serrao shared the view that the government must do something to deal with the problem.

Some observers, however, doubt whether the government can solve the problem as for the past 20 years, there has been no regeneration in the country's leadership.

The two, along with their political opponent Mari Alkatiri, also a former resistance leader, are dominant figures in the country's small political elites but have yet to pass their batons to their young mates.

Last month, Ramos-Horta won the presidential election to serve as the head of state, returning to office on Thursday about 10 years after his first term between 2007 and 2012. He was also the country's prime minister from 2006 to 2007. 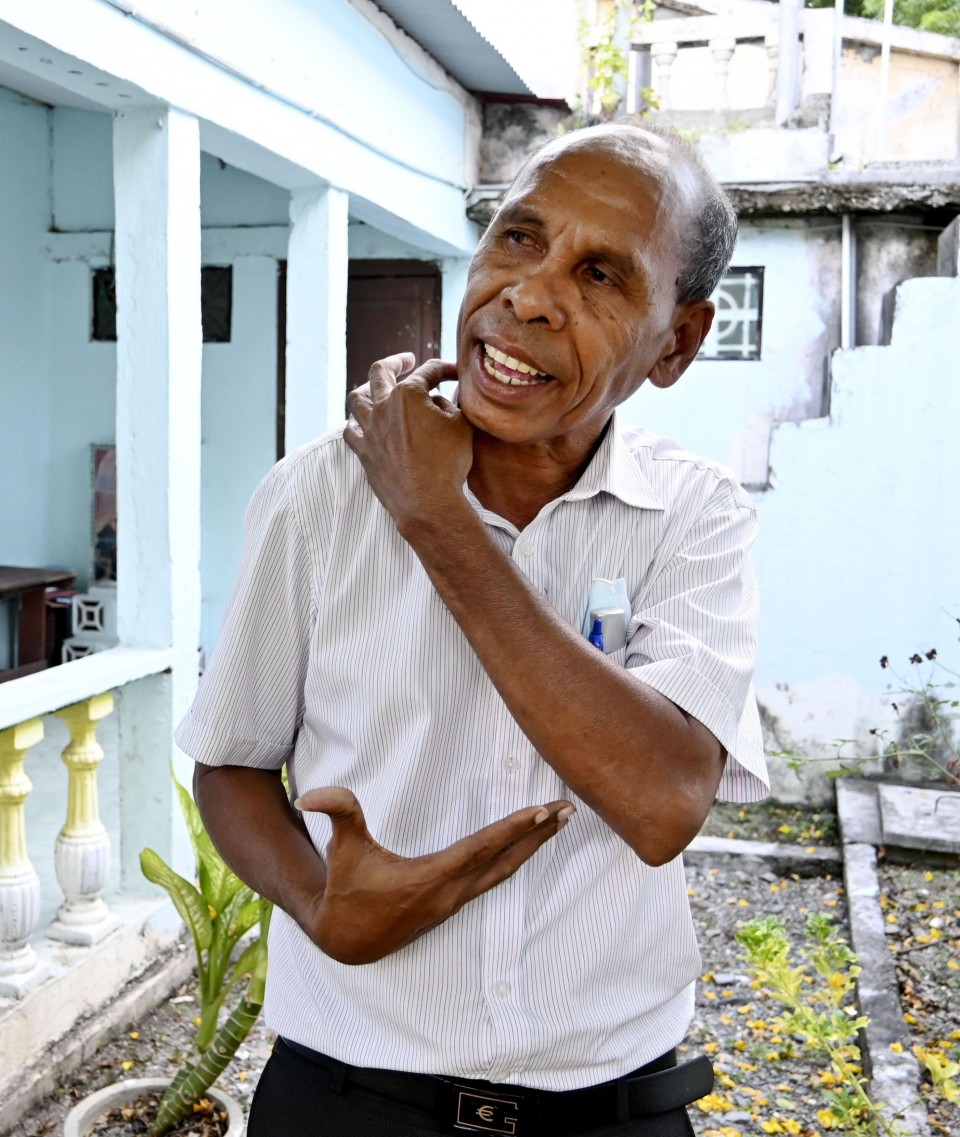 Photo taken on May 17, 2022, in the town of Liquica, about 33 kilometers from Dili, shows Jose Menezes Nunes Serrao describing how he had his neck slashed by pro-Jakarta militiamen in April 1999 after then Indonesian President Bacharuddin Jusuf Habibie announced a referendum on self-determination for the East Timorese. (Kyodo)

Soares, however, put aside such doubts of the observers, arguing that after 20 years, people "have been given enough time to see who can do more, who can do better, who has bigger commitments and who is more competent in delivering the commitments."

"I'm quite optimistic looking at the strong mandate that Ramos-Horta got and I also want to help so we can be a bit more orderly in terms of stability, economically and politically," he said, referring to the president's landslide victory.

He expressed belief that under Ramos-Horta's leadership, East Timor's economy would grow 7 to 8 percent next year after having expanded 3.5 percent on average over the past 20 years.

"There are many young people with potential" to lead the country in the future, Soares said when talking about up-and-coming junior leaders. "It's just a matter of time" before they appear, he said.

(Antonio Mali contributed to the story)