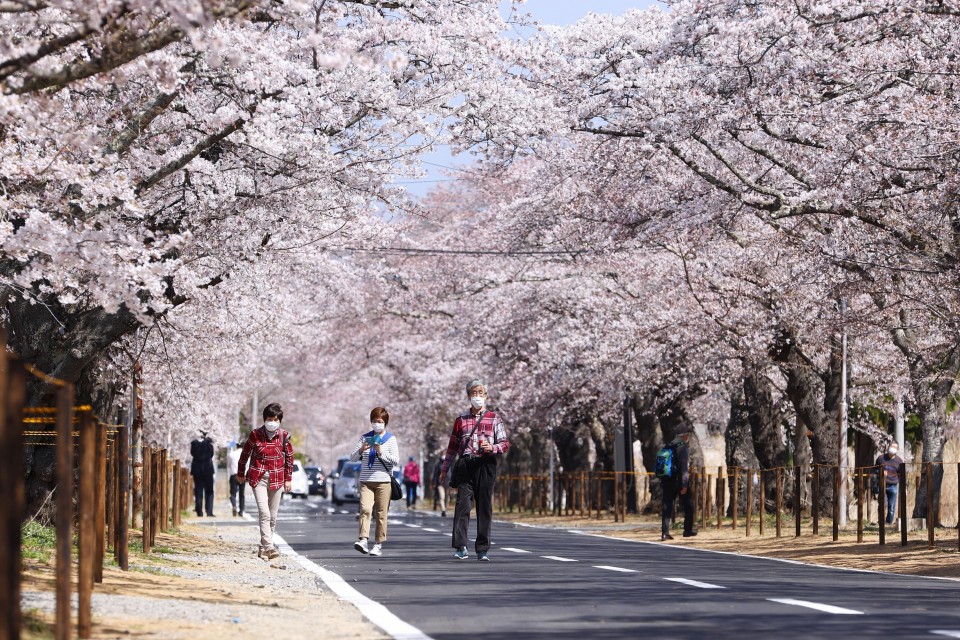 A street lined with cherry blossom trees in the northeastern Japan town of Tomioka, near the crippled Fukushima Daiichi nuclear plant, fully opens to the general public for the first time since the March 2011 nuclear crisis, as a cherry blossom festival is held there ahead of the expected lifting of an evacuation order in the town in the spring of 2023. (Kyodo) ==Kyodo

TOKYO - Japan on Saturday accepted Ukrainian evacuees using seats secured by the government on a direct commercial flight from Poland for the first time.

The six aged between 6 and 55, of which five are female, arrived at Narita airport near Tokyo from Warsaw, according to the Immigration Services Agency of Japan.

Australia PM calls for federal election on May 21

SYDNEY - Australian Prime Minister Scott Morrison Sunday called for a federal election on May 21, with campaigning expected to focus on economic and security issues.

"We are dealing with a world that is less stable than at any other time since the Second World War," Morrison told reporters in Canberra, pledging to keep people safe by continuing "the biggest rebuilding of our defense and security forces."

63% of people with foreign roots in Japan questioned by police

TOKYO - A total of 62.9 percent of people in Japan with foreign roots were questioned by police over the past five years, preliminary results of a recent Tokyo Bar Association survey showed, with the group saying the outcome is evidence of biased behavior by officers.

The survey on racial profiling drew responses from 2,094 people with roots in foreign countries. The association said it conducted the poll after receiving complaints that many such people had been questioned by police apparently due to their appearance.

TOKYO - The new chief of a Myanmar pro-democracy organization in Japan on Sunday called on its people to band together for the Southeast Asian country's shadow government formed after a military coup more than a year ago.

"Let's remember the people who lost their lives through the democracy movement," said Saw Ba Hla Thein, the head of the Japanese representative office for the National Unity Government, before holding a silent prayer at a fund-raising event in a park in central Tokyo, attended by more than 1,000 people.

ISLAMABAD - Pakistan's Prime Minister Imran Khan was ousted Sunday after he lost a no-confidence vote in parliament, with a new leader to be selected Monday.

The no-confidence motion was submitted last month by opposition parties accusing Khan of economic mismanagement. Although Khan dissolved the lower house on April 3 in an attempt to avoid a vote, the Supreme Court dismissed the move and ordered deliberation on the motion to resume.

TOKYO - Over 20 percent of major Japanese companies that do business in Russia have decided to halt such operations following Moscow's invasion of Ukraine that triggered Western nations' economic sanctions against Russia, a survey by a credit research firm showed.

In the Teikoku Databank Ltd. survey of 168 major Japanese firms that operate businesses in Russia, 37 companies said they plan to stop operations there as of March 15 amid a worsening environment due to disruptions in logistics and supply chains.

The 20-year-old right-hander, whose father was killed in the March 2011 earthquake and tsunami that devastated Japan's northeast coast, was heavily scouted by Major League Baseball teams before signing with the Marines out of high school prior to the 2020 season.