A 4K digitally remastered version of an anime based on the Hindu epic Ramayana was screened last month in Tokyo almost 30 years after its first release, with the makers reminiscing about the barriers they overcame in the groundbreaking project.

"We remastered the anime for Indian fans who have been wanting to see a better quality version, making it available for the next 2,000 years," said Kenji Yoshii, an official at Tokyo company that owns the rights to the production.

Yoshii, along with Atsushi Matsuo, a director at TEM Co., said "Ramayana: The Legend of Prince Rama" was made by a Japanese-Indian team at a time when international productions were uncommon in the Japanese animation industry. 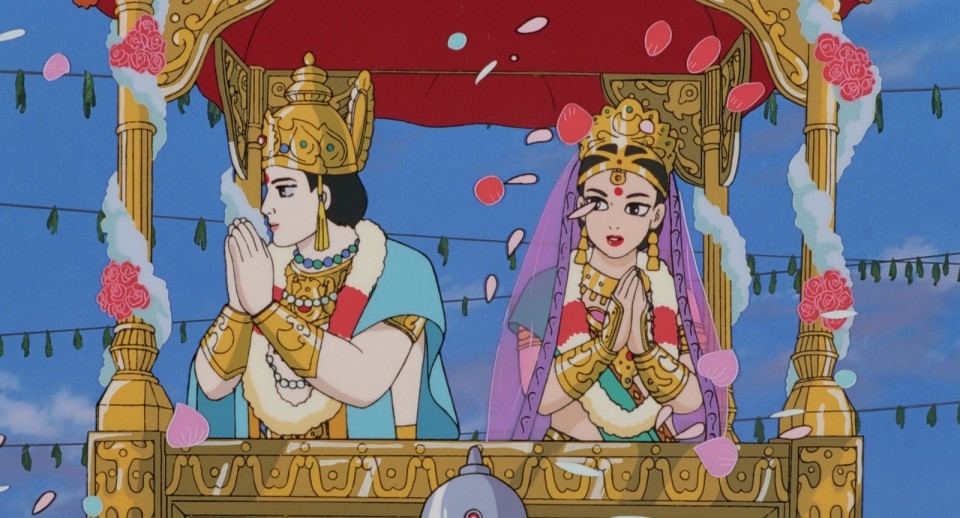 "There were no mobile phones, fax or emails, and we were discussing images that we received via courier," said Yoshii, adding that even telephone calls had to be kept brief due to the quality of the phone lines between the two countries in the 1980s.

Matsuo, who is also the executive producer, said it was "really a miracle" that the animation was completed under the circumstances.

One of the two main Hindu epics, Ramayana is about the god Rama, who successfully battles Ravana, a king, who has abducted Rama's wife, Sita. Initially written by Indian poet Valmiki in the 5th century B.C., the epic has different versions across South Asia.

The original anime was directed by Japan's Koichi Sasaki and Yugo Sako together with Ram Mohan, known as India's father of animation, and released in 1993. It cost 800 million yen ($6.7 million), considerably more than the average for an animation film of that time.

Sako developed a passionate interest in the epic when he was working on a documentary about waterways in Asia, including the Ganges in India, and voraciously read all the Japanese translations of the Ramayana available at that time. 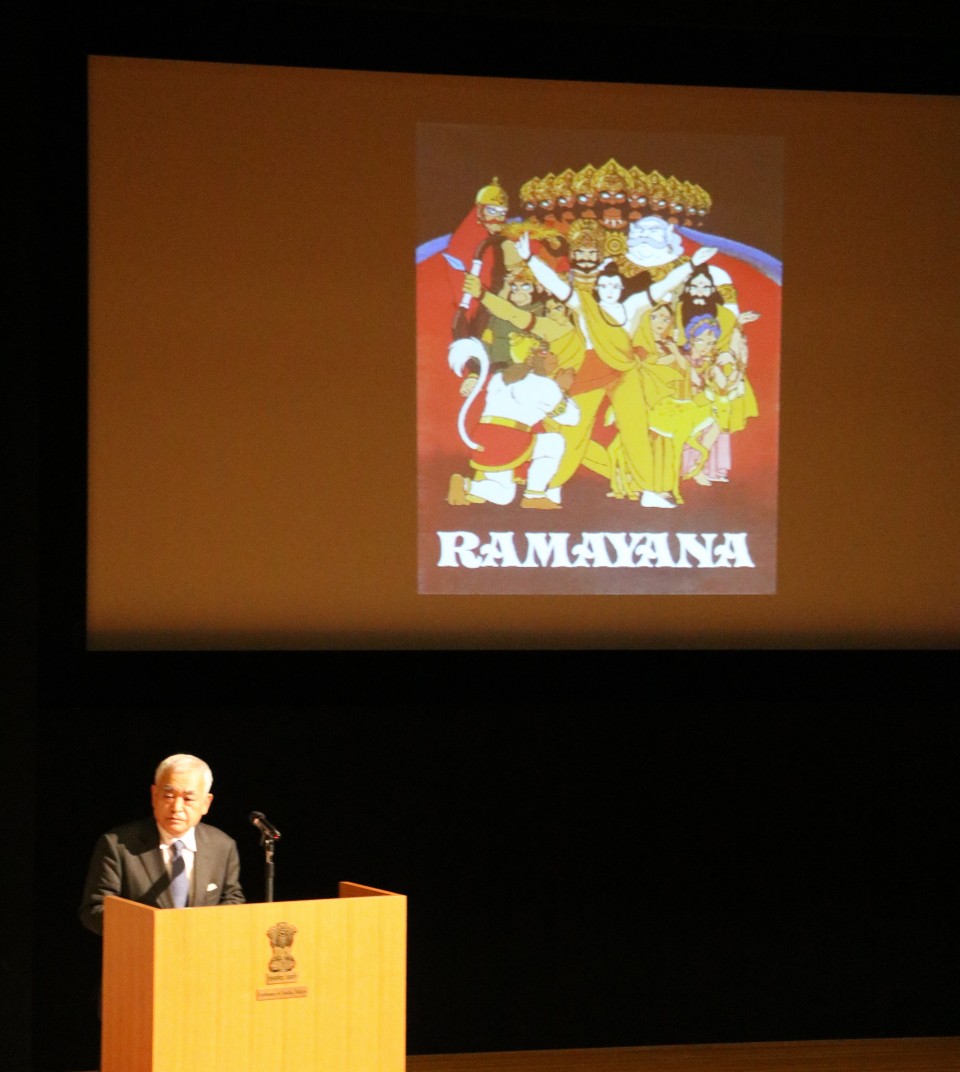 Photo shows Atsushi Matsuo, director at TEM Co., speaking at the screening of the remastered anime "Ramayana: The Legend of Prince Rama" at the Indian Embassy in Tokyo on Feb. 4, 2022. (Kyodo)

"He (Sako) was tremendously impressed with the story and also with the number of characters -- humans, animals, even vegetables and plants -- and said this was the ideal story for a film," said the late Mohan's wife, Sheila Rao, from India during a virtual interview.

Yoshii, also the assistant producer, said further that "Mr. Sako said the most appropriate medium to convey a free-flow story like Ramayana across the world is through animation and not a movie."

However, the project attracted opposition initially from a conservative religious group in India as many in the country saw anime as just entertainment for children.

The Indian government even contacted Japan's Foreign Ministry about the matter given that religious tensions in the multifaith country were high due to a conflict about the Babri Masjid -- a mosque constructed in the 16th century at a site believed by many Hindus to be the birthplace of Rama. The mosque was demolished by Hindu nationalists in 1992.

"It was as if Indians were making an animation on the Japanese imperial family, so it was natural for the Indian government to feel shock and worry," reflecting the subject's importance for Indians, Yoshii added.

"Mr. Sako was not going to let it (the project) die and my husband kept on doing his work," Rao said, relating how the Japanese director sought to explain to Indian doubters that anime is also made about serious topics in Japan.

Although the work was released in India in 1993, the political climate surrounding the Babri Masjid mosque along with doubts about anime as a serious medium prevented it from getting the promotion and exposure its makers had hoped for.

"Animation was very nascent at the time in India," said Ravi Swami, a British animator and illustrator. "It was about simple cartoons...so if you said you were going to do Ramayana (via anime) they would immediately think 'You're crazy'."

But the work in fact did remarkably well on television as it was "quite groundbreaking in animation terms," Swami added.

Many Indian children born in the 1990s waited anxiously for each episode at home, with little knowledge that Japanese animators had been involved, he said.

Furthermore, it opened the door to a series of subsequent animations depicting Hindu gods and epics.

"Watching Ramayana became a holiday ritual ...and now you can't find anyone who has not seen it," said Mohan's son Kartik, referring to Hindu festive holidays.

Gunjan Joshi, a Ph.D student at the University of Tokyo who attended the screening of the remastered edition at the Embassy of India in Tokyo said: "As a child, I used to watch it on TV but did not know it was a Japanese collaboration. Now I am able to recognize the Japanese element in it."

The updated version was screened on the occasion of the 70th anniversary of Indo-Japan diplomatic relations, with the original version being released on the 40th anniversary. 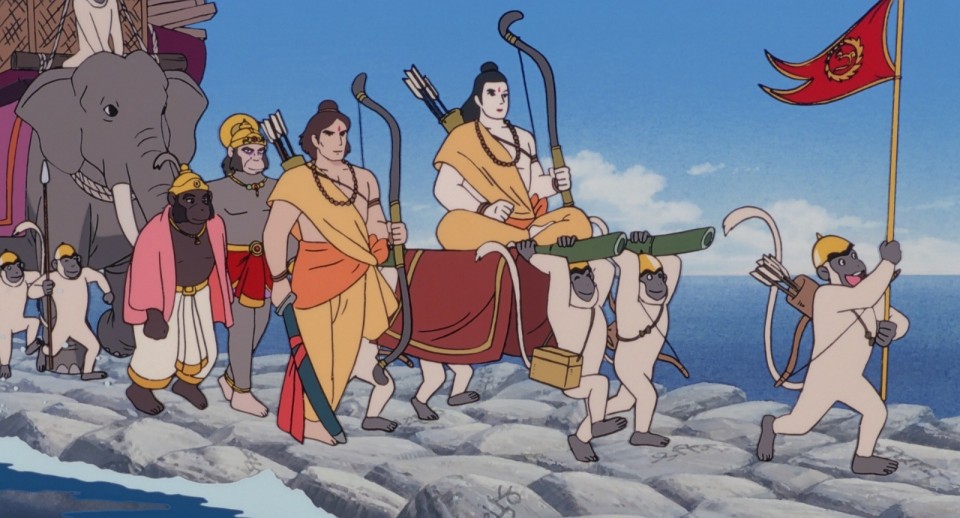 Supplied photo shows Rama hoisted by a palanquin in the remastered anime "Ramayana: The Legend of Prince Rama." (Photo courtesy of TEM Co.)(Kyodo)

Although viewers across India relished the animation's artistry, it was not a financial success. TEM now plans to start afresh by screening the new edition in India in cinema halls, on television through local broadcasters, and via an online streaming service.

The company has also initiated discussions with major local cinema halls for screenings in Japan.

Many cinemas and broadcasters in Japan refused to screen the original, partly due to its 135-minute length.

Some productions in Japan even proposed incorporating elements such as robots, which were popular in Japanese anime, but Matsuo was determined to keep the original story.

Efforts to get it shown were complicated a few years later by the sarin nerve gas attack by the AUM Shinrikyo cult in 1995 in Tokyo, according to Matsuo. With the word "AUM" having its roots in Hinduism, there were concerns that the anime might not sit well with Japanese audiences.

The anime had around 120,000 hand-drawn "cels," or transparent sheets on which the work is drawn, a relatively large number for the anime's length, with some 400 highly skilled Japanese animators -- including those who had been involved in projects led by famed Japanese animation director Hayao Miyazaki -- working on it.

Originally it was made in English, with song scenes presented in Sanskrit.

After TEM launched the remaster, some Japanese firms approached with suggestions such as making modifications to the storyline, but Matsuo again declined.

TEM now aims to set up a "Ramayana fund" from the earnings to contribute to "cultural exchange, world peace and human peace" at a time when the international community is going through such economic and political turmoil, Matsuo added.