A picture-story show depicting the aftermath of the atomic bombing of Hiroshima on Aug. 6, 1945, was performed in New Delhi on Friday in Hindi, the official language of India, for an audience of hundreds of children all over the country.

The virtual event, co-organized by the Japan Foundation and Indias Bookaro Trust, employed the easy-to-understand medium of "kamishibai," or "paper drama" in Japanese, a form of storytelling popular with children before the emergence of television. 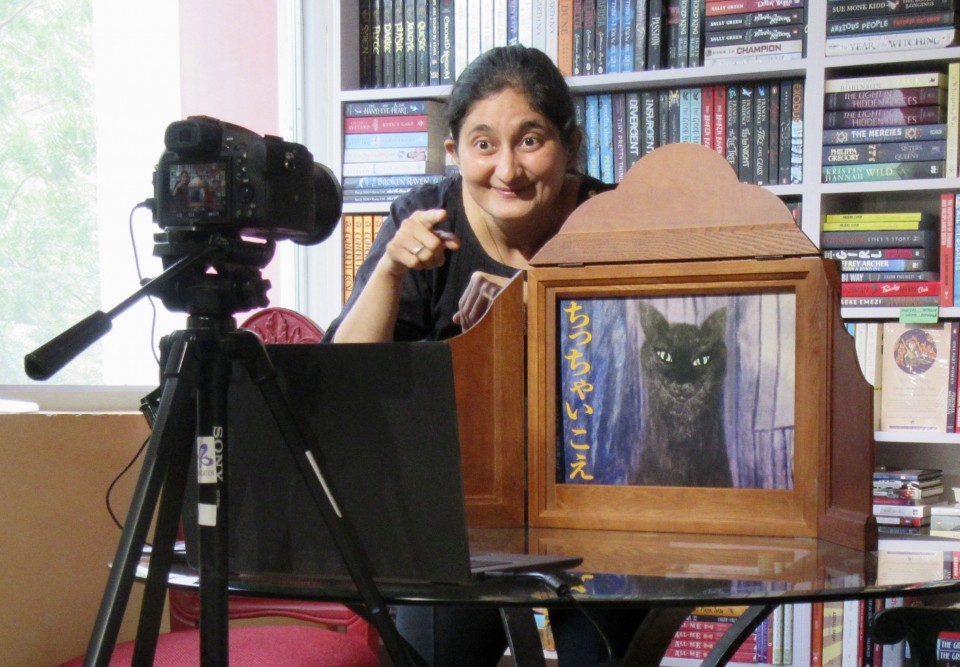 Vasundhara Bahuguna performs and streams by Zoom a picture-story show at a New Delhi bookstore on Aug. 6, 2021. (Kyodo)

Titled "Nanhi Awaaz" (little voice), the story translated from Japanese focused on the horror of the atomic bomb and the sinfulness of human beings as seen through the eyes of a black cat.

The pictures were sensitively drawn to evoke in children's hearts "the futility of war and its aftermath and thereby highlight the significance of peace," the organizers said.

Japan-based American poet Arthur Binard, who wrote the story, dedicated it to the victims of the Hiroshima tragedy.

He stressed the importance of people around the world learning what happened there 76 years ago and the pain and sorrow it caused.

The event at a New Delhi bookstore, which attracted some 700 online viewers, was open to children 10 and above, with some schools participating by Zoom.

Sparsh, 15, a junior high school student who participated virtually from Amritsar, a city in the northern state of Punjab, said, "Peace is the thing that we all need to learn about. War cannot teach us anything."

Tomoko Kikuchi, an India-based Japanese translator who rendered the story into Hindi, said Indian children read about Hiroshima in school and are shown pictures, but "no one can understand the level of severity the atomic bombing did to the place."

"Today's kamishibai shows how living beings were affected," she said.

Indian storyteller Vasundhara Bahuguna, who narrated, said she "really felt one with the story" and was "happy that I was able to do it justice."