Veteran No. 3 maegashira Tamawashi took advantage of a slipup to snap yokozuna Terunofuji's 23-match win streak Friday and remain within one win of the New Year Grand Sumo Tournament lead.

The win improved the 37-year-old Tamawashi's career record between the Mongolian-born grapplers to 6-10 and left both wrestlers with 5-1 records, one back of sekiwake Mitakeumi and No. 6 Abi in the 15-day tourney at Tokyo's Ryogoku Kokugikan.

Terunofuji, who so far this tournament has repeatedly navigated out of difficult situations, seemed taken back by the speed of Tamawashi's charge. A couple of shoves to the throat kept him on the back foot, only for that foot to lose its traction.

When Terunofuji, winner of the last two tournaments, tried to counterattack, his right foot gave way twice on the ring's sandy surface. He lurched forward to his right off balance and only steadied himself by putting his right hand on the clay.

"I had a good charge today," said Tamawashi, who was coming off a win against ozeki Shodai on Thursday. "I have landed good blows against him, had the advantage, numerous times, but I'd always end up losing. It worked out at last." 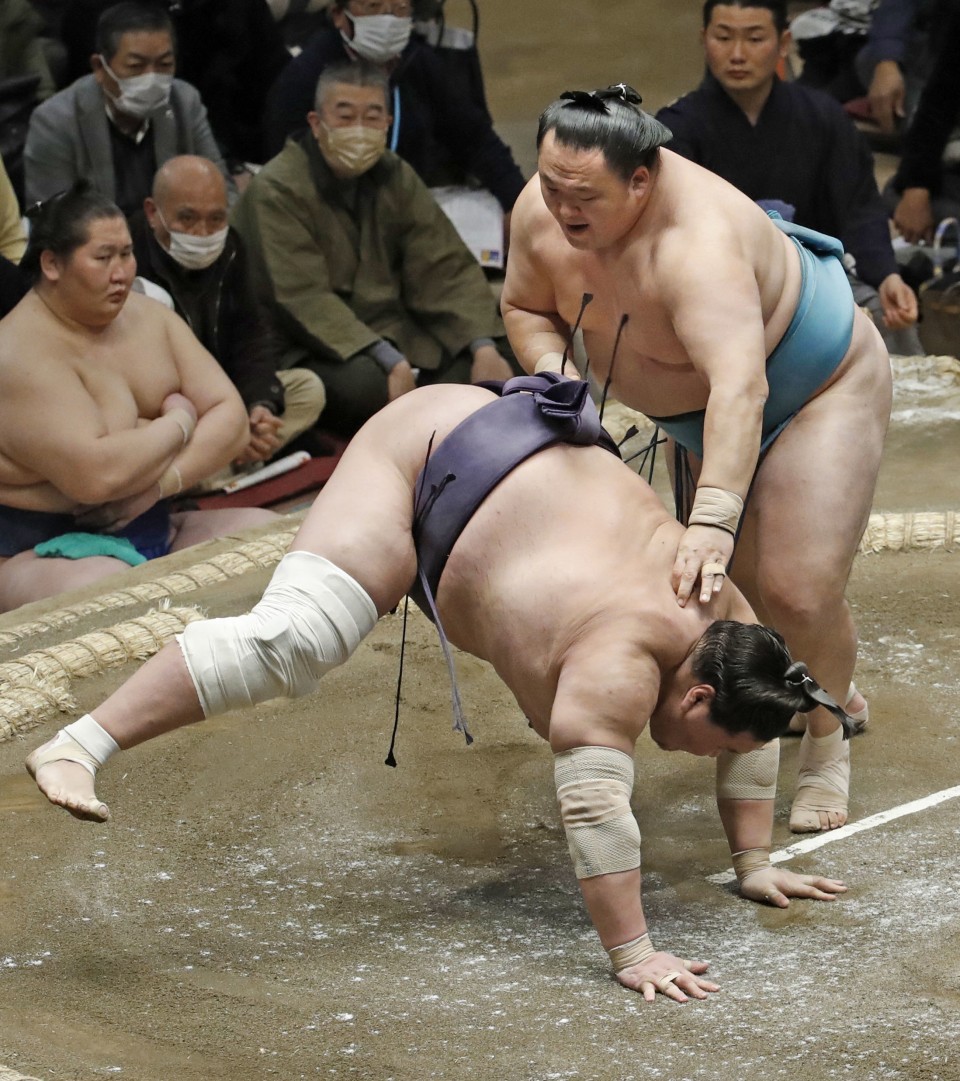 Mitakeumi improved to 12-7 in his career against No. 3 Endo (2-4) with a flawless drive that powered his opponent backward over the straw from the initial charge.

Abi, who has been in top form since returning from a three-tournament suspension for violating coronavirus protocols in July 2020, improved to 6-0 by throwing No. 9 Shimanoumi (3-3).

Ozeki Shodai failed to keep pace with the leaders, suffering his third defeat in a lackluster performance against No. 2 and former sekiwake Ichinojo (3-3).

The 1.90 meter 206-kilogram Mongolian got off the mark so quickly that Shodai was unable to extend his arms before Ichinojo had wrapped them up. Ichinojo then used his superior reach to keep the ozeki off his belt as he forced him steadily backward and over the straw bales.

Sekiwake Takanosho evened his record at 3-3 by shoving out komusubi and former sekiwake Daieisho. The defending tournament champion, Daieisho paid the price for an instance of hesitation to suffer his fourth loss.

In a battle of wrestlers with 1-4 records, quick-thinking No. 2 Ura demonstrated why he is a fan favorite in an entertaining win over No. 1 Kiribayma.

As Kiribayama pursued his opponent to the straw for a second time, Ura sprang his trap. Slipping to one side, Ura grabbed Kiribayama's arm, spun him around and then marched him over the straw from behind to the audience's delight.