Yokozuna Terunofuji improved to a perfect 5-0 on Thursday with victory over towering No. 2 maegashira Ichinojo at the New Year Grand Sumo Tournament.

The sport's sole grand champion demonstrated his unrivaled combination of strength and grappling technique to win the battle of Mongolian-born giants in the final bout of Day 5 at Ryogoku Kokugikan.

Terunofuji snared former sekiwake Ichinojo with a solid left hand grip from the opening charge, then used it sling the 1.9-meter, 206-kilogram titan down to the clay with an overarm throw. 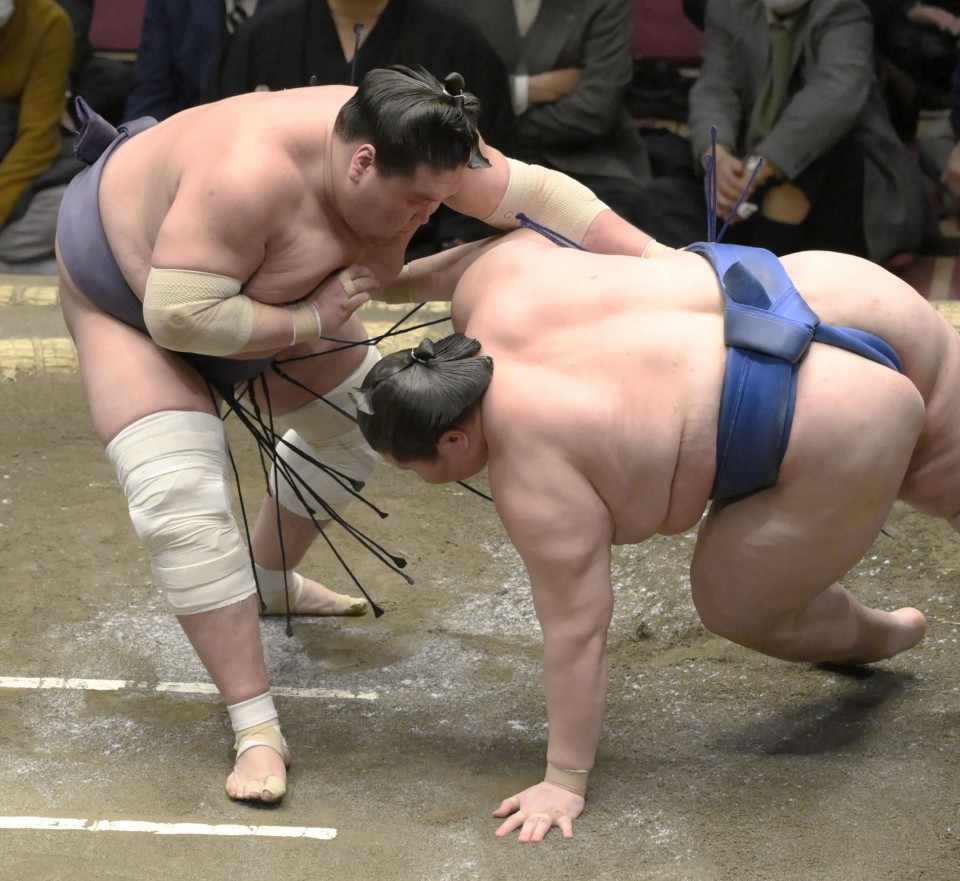 Just two other wrestlers, sekiwake Mitakeumi and No. 6 Abi, remain unbeaten through five days of the 15-day tournament.

Shodai, the only competing ozeki following the injury withdrawal of Takakeisho (1-3-1), dropped to 3-2 with a disappointing loss to No. 3 Tamawashi (4-1).

The ozeki was never in the contest against Mongolian former sekiwake Tamawashi, who pushed Shodai out of the ring with shoves to the face and upper body.

Tamawashi, who won his only Emperor's Cup in January 2019, said he felt in good shape despite being one of sumo's oldest active wrestlers at 37.

"I'm not having too much trouble. I'm aware of my age, but I don't think about it too much," he said.

Mitakeumi (5-0) bundled out No. 1 Kiribayama (1-4) to stay at the top of the leaderboard. The two-time grand tournament winner won the opening clash and kept moving forward for a victory by push out.

Abi, who made a title challenge in his top-division return in November, continued to impress as he pushed out No. 4 Hokutofuji (2-3).

The former komusubi is seeking to climb back to the three "sanyaku" ranks below yokozuna after serving a three-tournament suspension for breaking coronavirus safety rules in July 2020.

Sekiwake Takanosho dropped to 2-3 with a thrust-down loss to No. 1 Wakatakakage (1-4), who finally opened his account after losses to Terunofuji and three sanyaku wrestlers.

Komusubi Daieisho, winner of last January's grand tournament, improved to 2-3 by pushing out winless No. 4 Okinoumi.