Okinawa Gov. Denny Tamaki said Thursday he will not approve the central government's planned design change for the relocation of a key U.S. military base within the southern island prefecture, a decision that could lead to a legal battle.

Tamaki has been calling for dialogue with Prime Minister Fumio Kishida over the controversial transfer plan for U.S. Marine Corps Air Station Futenma, located in a residential area of Ginowan, to the less densely populated coastal area of Henoko in Nago, but the central government has shown no signs of responding. 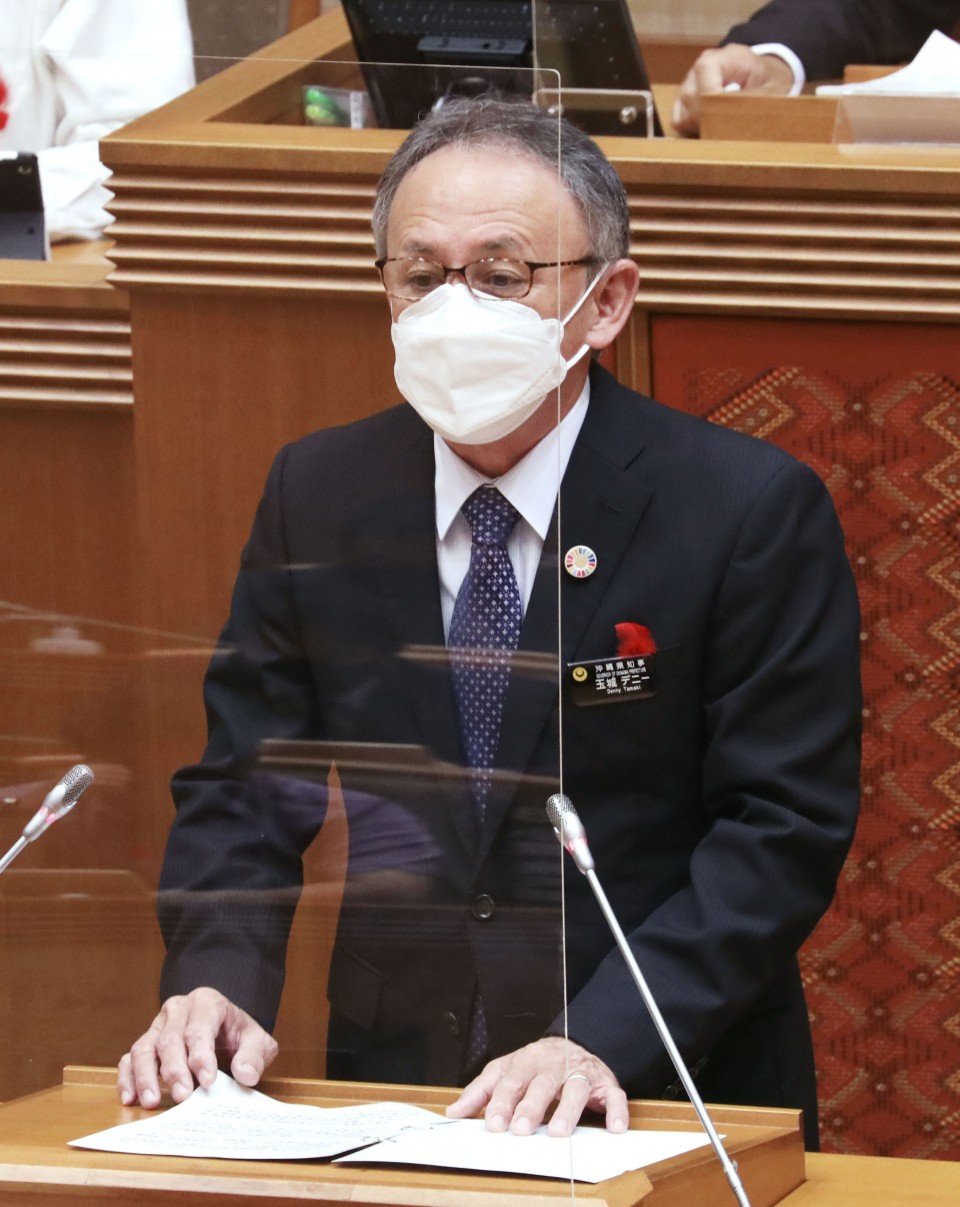 "It is unacceptable to continue (new base) construction with no prospect of completion, which is effectively meaningless," Tamaki said at a press conference.

Under the plan to transfer the functions of the Futenma airfield to the new site adjacent to the Marines' Camp Schwab, in line with a 1996 bilateral accord on the return of land occupied by the air base, the central government is scheduled to reclaim land in waters off the Henoko area and construct V-shaped runways.

But progress has been slow, with many locals strongly opposed to the plan as they hope the U.S. base will be relocated outside the subtropical island prefecture.

Refusing to approve the application submitted in April last year by the Defense Ministry's Okinawa bureau to address weak ground found in the planned reclamation area will be the prefecture's "trump card," according to a local assembly member.

The governor pointed out that the Defense Ministry bureau has not fully examined the stability of the ground as it has yet to check the deepest point and its investigation of the design change's possible impact on endangered dugong in the area was insufficient.

The central government is expected to take immediate countermeasures, with a court fight likely to ensue.

After decades of hosting the bulk of U.S. military facilities in Japan, many people in Okinawa, which remained under U.S. rule until 1972 following Japan's defeat in World War II, are frustrated with noise, crimes and accidents linked to the bases.

Chief Cabinet Secretary Hirokazu Matsuno said the same day the central government maintains its view that the relocation to Henoko is the only solution, citing the need to ensure deterrence under the Japan-U.S. alliance and remove the dangers posed by the Futenma air base at the same time.

"We will do our utmost in realizing the return of (the land occupied by) the Futenma air base at the earliest date while continuing to make efforts to gain the understanding of local people," he said at a regular news conference.

Even if the change is approved, it is expected to take at least 12 years until the start of operations at the new base, with the project's costs totaling around 930 billion yen ($8.06 billion).

Since receiving the application, the Okinawan prefectural government has sent around 450 questions to the Defense Ministry asking for more details about the plan.

Some prefectural assembly members expressed support for Tamaki's decision Thursday, saying, "We need two or three arrows in the quiver, such as an injunction against the use of the port and soil related to the landfill."

But Ginowan Mayor Masanori Matsugawa told reporters in Naha it was unfortunate that the return of Futenma would be drawn out even longer as "it has been 25 years since the agreement on the return of land occupied by the base was made."

Metal water bottle falls from Osprey onto residence in Okinawa