Daichi Kamada scored for the third straight Europa League game on Thursday as Eintracht Frankfurt scraped a late 2-2 draw at home against Antwerp to remain top of Group D, while his Japanese compatriots Kyogo Furuhashi and Ritsu Doan each had an assist in other fixtures.

Kamada opened the scoring in the 13th minute when he half-volleyed Timothy Chandler's cross from the right with the outside of his boot. Frankfurt gave away two goals but Goncalo Paciencia salvaged a point in the 94th minute at Deutsche Bank Park. 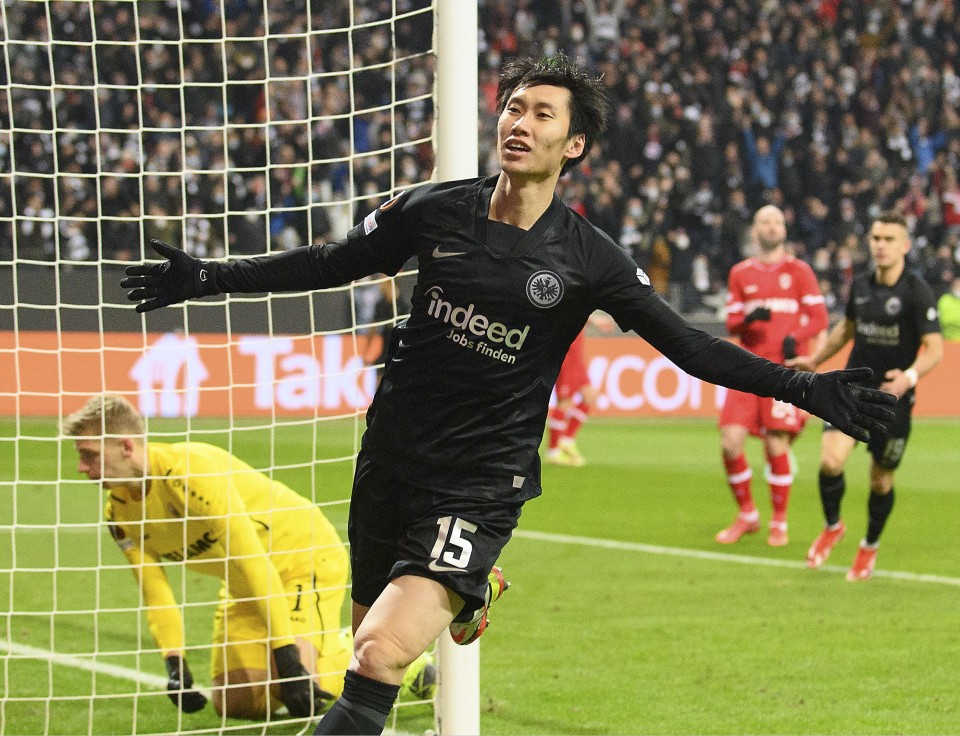 Daichi Kamada of Eintracht Frankfurt celebrates after scoring a goal against Antwerp in a Europa League game in Frankfurt on Nov. 25, 2021. (Kyodo)

The tournament has been a happy hunting ground for Kamada, who scored six goals in the competition two seasons ago. The 25-year-old has taken his tally to three this season after scoring one each in games home and away against Greek club Olympiakos.

In Group G, Furuhashi won a penalty and provided an assist but Celtic suffered a 3-2 defeat away to Bayer Leverkusen that eliminated the Glasgow club from the tournament with a game to play.

Furuhashi drew a foul from Leverkusen keeper Lukas Hradecky as he tried to head a cross and Josip Juranovic's 40th-minute penalty made it 1-1 before the Japan forward capitalized on a defensive error to set up Jota's goal in the 56th minute.

But Celtic conceded twice after the 82nd minute and the defeat means they will finish third and fall short of qualification whatever happens in their final fixture.

Doan had a superb assist of his own during PSV Eindhoven's 2-0 home win over Sturm Graz in Group B, consolidating the Dutch club in second place and keeping them on course for the knockout phase.

With his back to the goal, Doan set up Bruma in the 56th minute for PSV's second, a deft flick of the ball onto his right heel put it into the path of the Portuguese inside the box.