Yokozuna Terunofuji concluded the Kyushu Grand Sumo Tournament in style Sunday, with his first perfect 15-0 record for the icing on the cake of his already-clinched sixth Emperor's Cup.

Facing ozeki Takakeisho (12-3), Terunofuji was tested but got the all-important win as he more than fulfilled his duty as the sole yokozuna over the meet at Fukuoka Kokusai Center following the retirement of record 45-time winner Hakuho.

After winning his maiden meet at yokozuna in September, Terunofuji is the first wrestler since 32-time champion Taiho in 1962 to win in his first two tournaments as a grand champion. 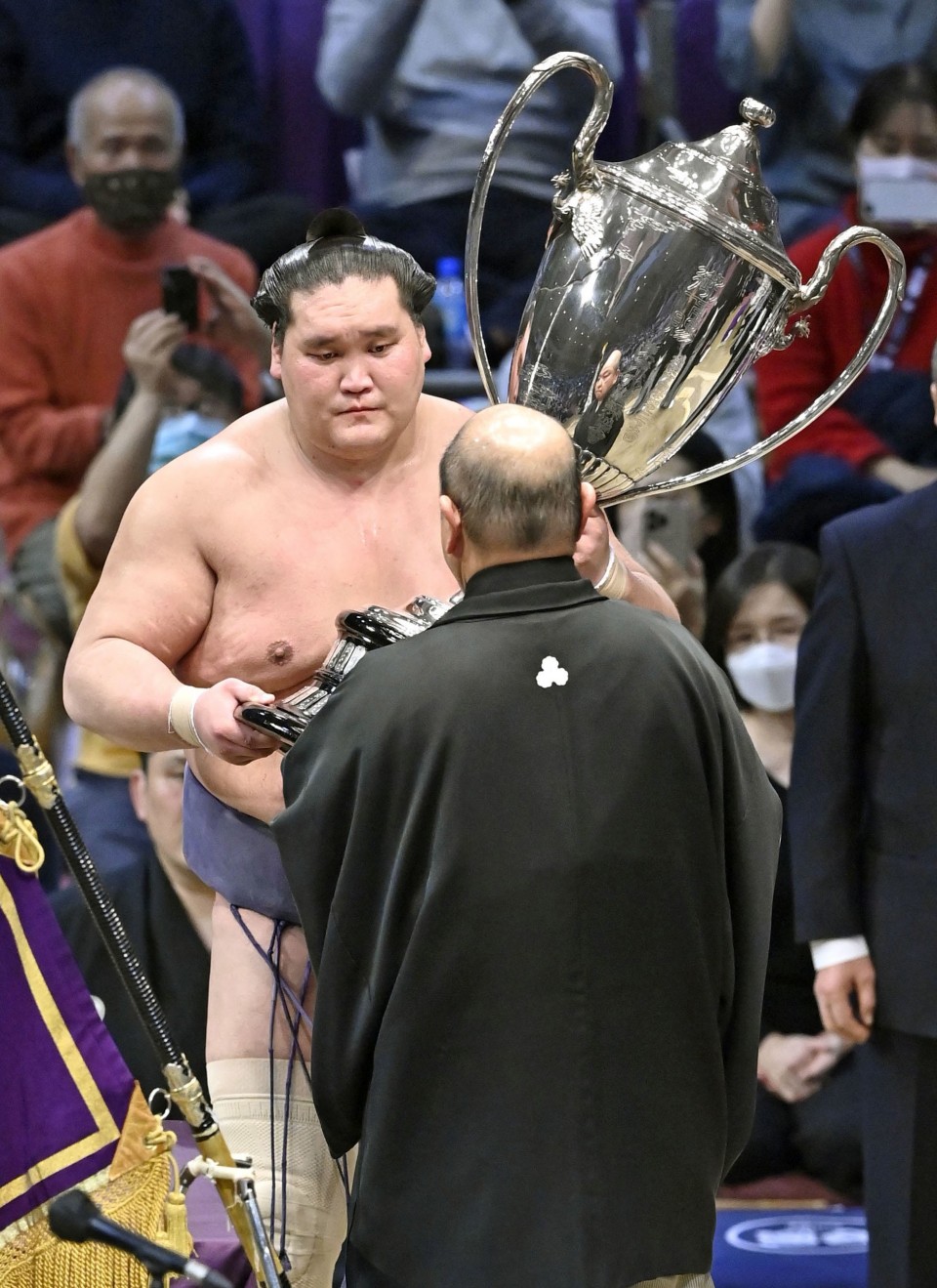 "It was the first Kyushu meet in a while so I was thankful it was being staged. Your support help me go on to dohyo with confidence," Terunofuji said after last year's meet in Fukuoka was moved to Tokyo amid the COVID-19 pandemic.

"Getting a perfect record was something I've never achieved before so I'm really pleased to have accomplished it."

Terunofuji was on the receiving end for most of his bout against Takakeisho, who pushed the yokozuna to the edge while keeping his distance and knocked the title winner off balance with a strong right-hand parry.

The ozeki kept up the pressure by pushing the throat of Terunofuji, but the yokozuna withstood the attack and there was no way back for Takakeisho once Terunofuji countered and began pushing him out.

"I'm not such a talented wrestler capable of doing many things," Terunofuji said. "I always intend to attack and defend by placing my big body straight at the opposition. I've always trained with that as my ideal sumo and I feel I'm gradually getting there."

"I'll never get there 100 percent until I retire but I want to wrestle as close to it as possible."

Terunofuji was wrestling as an ozeki before knee injuries and illness dropped him as low as the fifth-tier jonidan division in March 2019.

He has since made an unprecedented resurgence, winning the elite makuuchi division on his return in July last year. He then won four of this year's six tournaments.

"I've never imagined things would turn out this way and I feel happy to have given all my best to this day," said Terunofuji, who turns 30 on Monday. "I'll aim to reach double figures in career titles next year."

No. 15 maegashira Abi (12-3) was in the title race until Saturday and earned his third Fighting Spirit Prize on his return to the elite makuuchi division.

He did not finish on a high, however. No. 2 Takanosho (11-4), a former sekiwake, overpowered him at the initial charge before shoving him out. The win allowed Takanosho to earn his second career Fighting Spirit Prize.

Abi, a former komusubi, received a three-meet suspension last year after breaching the Japan Sumo Association's COVID-19 protocol in July, but his impressive winning record in his return to the top division could see him make a huge rise in the rankings for the next tourney in January.

Shodai had 11 wins in January, his only meet with 10-plus wins this year. He suffered a losing record in March before only narrowly earning winning records since.

Sekiwake Meisei (7-8) took advantage of an untimely pull-down attempt by giant Ichinojo (5-10) and swiftly pushed the komusubi out.

New komusubi Kiribayama (6-9) is set to drop out of the three "sanyaku" ranks below yokozuna due to his losing record, but he displayed good strength to force out veteran No. 6 Tamawashi (9-6).

No. 7 Ura (10-5) claimed the Technique Prize after his bouts provided plenty of highlights during the 15-day meet. It was the first time he had won one of the three "sansho" special prizes.

The trickster attempted to thrill the crowd once again on the final day but could not quite pull it off, failing to pick the leg of No. 15 Chiyomaru (8-7) before getting floored with an overarm throw.