Yokozuna Terunofuji overpowered sekiwake Meisei at the Kyushu Grand Sumo Tournament on Thursday, holding onto the outright lead with a spotless 12-0 record.

His nearest challengers for the title, ozeki Takakeisho and No. 15 maegashira Abi, won their Day 12 bouts to stay one win behind at 11-1.

Terunofuji showed off his imposing combination of raw strength and technique in the day's final bout at Fukuoka Kokusai Center, getting payback for a loss to Meisei on the way to his fifth Emperor's Cup in September.

Meisei (5-7) got both hands inside at the opening clash and drove Terunofuji backward before the Mongolian-born grand champion lifted him clean off dohyo, setting him back down in position to hook his leg and toss him to the clay. 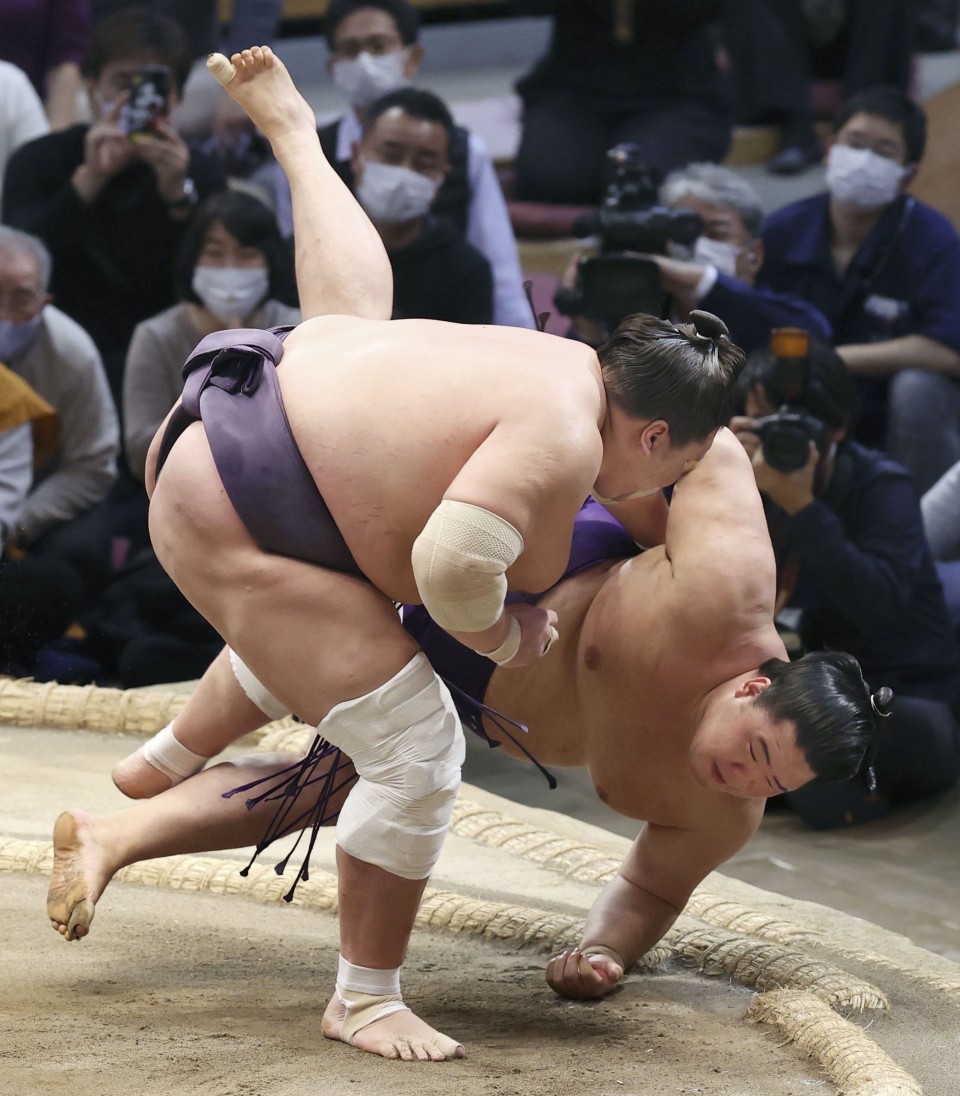 Takakeisho stayed in the hunt for his third grand tournament crown with a convincing push-out win over No. 5 Takayasu (5-7).

Holding an 8-7 edge in their previous top-division battles, Takakeisho was strong off the mark and never took a backward step against the former ozeki.

Former komusubi Abi blew away No. 6 Tamawashi (9-3), shrugging off a slap down attempt from the one-time grand tournament winner and thrusting him from the ring.

The one-sided victory continues an impressive top-division comeback for Abi, who served a six-month ban for breaking the Japan Sumo Association's coronavirus safety rules in July 2020.

The pair went shoulder to shoulder, fending off one another's grip attempts, until Endo found an opening to shove Mitakeumi back to the edge and out.

Ozeki Shodai secured a winning record for the tournament at 8-4 by forcing out komusubi Kiribayama (4-8).

Once again struggling to consistently perform at the level expected of sumo's second-highest rank, Shodai this time dominated from the jump as he consigned Kiribayama to a losing record.

Former sekiwake Takanosho (8-4) could be on track for promotion back to the three "sanyaku" ranks below yokozuna, earning an all-important eighth win by pushing out his fellow No. 2 Onosho (4-8).

"I tried (last tournament) to return to sanyaku, but it somehow didn't come together. This time, it's been different," Takanosho said. "I guess if I win, I'm in with a chance. I'll just keep doing my best."

Komusubi Ichinojo (5-7) outmuscled No. 4 Takarafuji (4-8), keeping alive his hopes of finishing the tournament with the eight wins needed to avoid demotion from sanyaku.

No. 16 Sadanoumi (8-4) outmaneuvered No. 13 Tochinoshin (4-5-3) to secure a winning record that ensures his place in the top division for the next grand tournament.