Yokozuna Terunofuji withstood a spirited effort from upstart No. 15 maegashira Abi on Saturday to secure the Kyushu Grand Sumo Tournament championship with a day to spare.

The Mongolian-born titan improved to an insurmountable 14-0 at Fukuoka Kokusai Center after being driven to the edge by title challenger Abi, who was making an unexpected bid for the crown in his return to the top division. 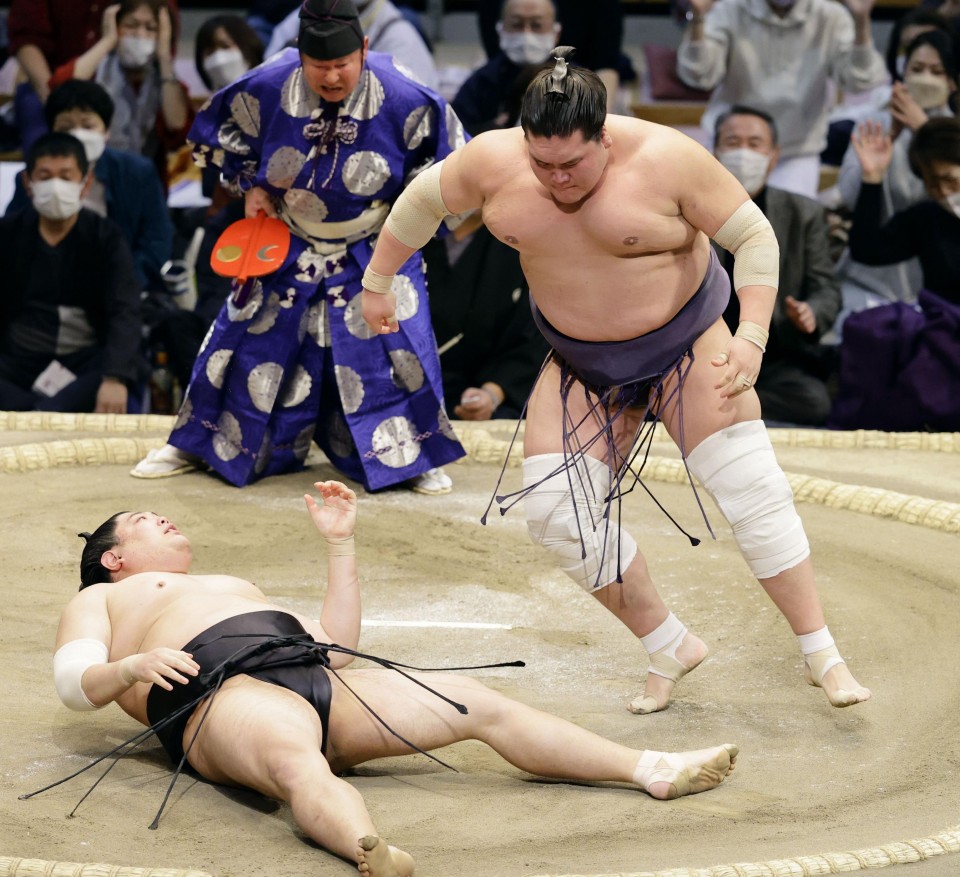 The victory on the second-last day gave Terunofuji a two-win buffer over former komusubi Abi and ozeki Takakeisho (12-2), ensuring the 29-year-old his second straight Emperor's Cup and first since Hakuho's retirement left him as sumo's only active grand champion.

"Terunofuji was imposing," Japan Sumo Association President Hakkaku said. "I think it must be quite hard to be the sole yokozuna. I hope he wraps up the year in fine fashion."

Fighting in the top division for the first time since his three-tournament ban for breaking coronavirus safety rules in July 2020, Abi furnished his credentials on Friday by pushing out Takakeisho, with whom he had been tied for second.

But Abi was unable to continue his giant-killing ways against the now six-time grand tournament winner, who is on the verge of finishing with a perfect 15-0 record for the first time.

Abi burst out of the blocks and sent Terunofuji backpedaling all the way to the straw with a combination of powerful shoves to the head and upper body. 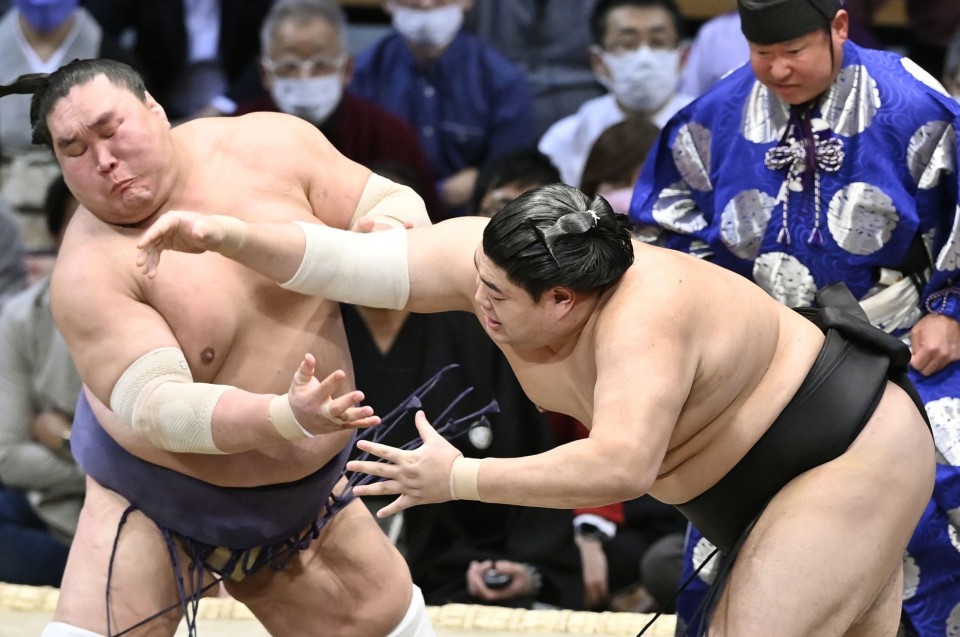 Abi (R) poses a challenge to grand champion Terunofuji on the 14th day of the Kyushu Grand Sumo Tournament on Nov. 27, 2021, at Fukuoka Kokusai Center in Fukuoka, southwestern Japan. (Kyodo)

Balancing just inside the ring on one foot, Terunofuji demonstrated incredible strength and poise as he fought his way back to the middle and pushed his opponent to the sandy surface.

"I'm relieved. I came into the tournament with a different feeling. But I did all the same things, preparing as I usually do," Terunofuji said.

"I'm just always thinking about taking it day by day, doing my style of sumo. Once I go up on the dohyo, all I do is try to win."

Winner of four of the five most recent tournaments, Terunofuji has defied the odds on his way to dominating the elite makuuchi division. The powerfully built grappler looked destined for retirement after plummeting down the ranks due to debilitating health issues, including multiple knee surgeries.

He began climbing his way back from the fifth-tier jonidan division in March 2019 and eventually marked his return to makuuchi by winning the July 2020 tournament from the lowest rank of No. 17.

"When I got demoted to the lower divisions, I found out how important it was to stay mentally strong every day," Terunofuji said.

Starting the day as the only other wrestler mathematically in contention for the title, Takakeisho (12-2) momentarily stayed in the running by winning the penultimate bout against fellow ozeki Shodai (9-5).

The two-time grand tournament winner got the best of the opening clash and remained on the front foot, denying Shodai's attempt at a belt grip and thrusting him out.

Sekiwake Mitakeumi advanced to 10-4 by slapping down durable Mongolian No. 6 Tamawashi (9-5), sending him to the clay after the pair collided heavily.

Sekiwake Meisei, already consigned to a losing record, quickly pushed out exciting No. 7 Ura (10-4) to improve to 6-8, while No. 12 Hokutofuji continued his strong campaign, beating komusubi Ichinojo (5-9) to win his 10th bout after an injury-hit September tourney, in which he only claimed two wins.