The Bank of Japan on Thursday trimmed its economic growth and inflation forecasts for the year through March, keeping its ultraloose monetary policy intact to buttress a fragile economic recovery from the COVID-19 malaise.

The BOJ gave the bleaker economic outlook after a two-day policy meeting, as parts shortages have hit automakers such as Toyota Motor Corp. that have been forced to cut output. COVID-19 restrictions that were in place until recently have delayed a recovery in the services sector.

Governor Haruhiko Kuroda warned of the risk that supply chain bottlenecks will last longer, not of the yen's recent weakness despite emerging concerns that it will put a damper on the economic recovery through higher costs for companies and households.

The Japanese central bank said the economy will likely grow 3.4 percent, rather than the 3.8 percent projected in its previous policy-setting meeting in July.

Core consumer prices excluding volatile fresh food are forecast to stay at 0.0 percent, lower than its earlier projection of a 0.6 percent increase.

"There is a high degree of uncertainty over whether curbing coronavirus infections and resuming economic activity can go smoothly," Kuroda told a post-meeting press conference.

"We need to pay attention to the risk that the impact of supply-side constraints will expand or be prolonged," he said. 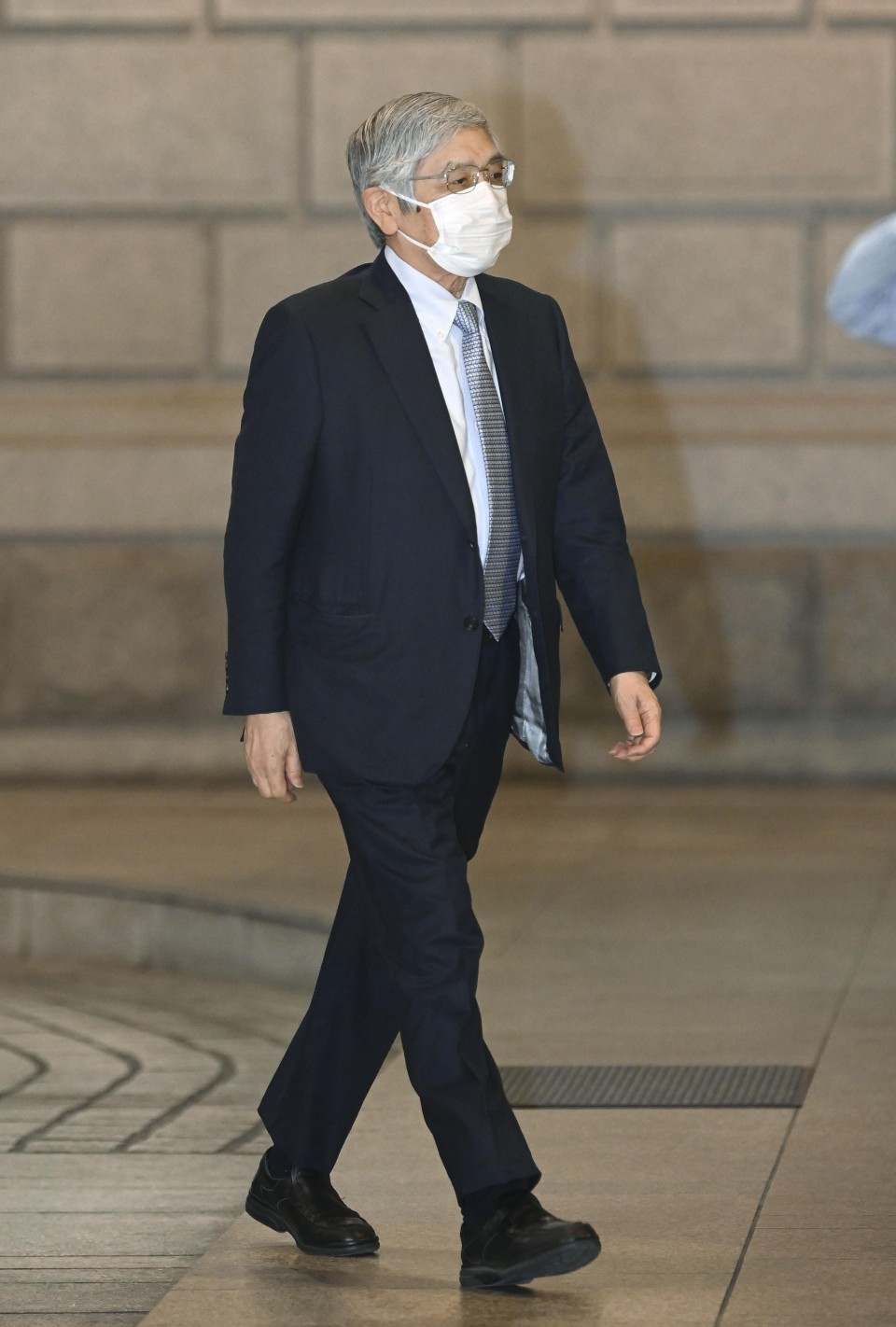 Bank of Japan Governor Haruhiko Kuroda arrives at the central bank's head office in Tokyo for a policy-setting meeting on Oct. 28, 2021, wearing a mask for protection against the coronavirus. (Pool photo) (Kyodo) ==Kyodo

The BOJ stands in sharp contrast with its peers like the U.S. Federal Reserve and the European Central Bank, which are increasingly facing the risk of inflation and the need to ponder scaling back crisis-mode support.

The growth outlook for the year from next April, however, was upgraded to 2.9 percent from 2.7 percent in the latest economic outlook report.

The BOJ will continue to buy exchange-traded funds with an upper purchase limit set at 12 trillion yen ($106 billion) a year. The policy board also decided to keep funding support for struggling firms amid the pandemic.

No surprises had been expected in the first BOJ policy meeting since new Prime Minister Fumio Kishida took office in early October.

Kishida, who is now aiming to win a majority in Sunday's House of Representatives election, has stressed the need to keep monetary easing in the crisis situation and for the central bank to stick to the 2 percent inflation target.

But opposition parties claim that bold monetary easing under "Abenomics," an economy-boosting program launched by former Prime Minister Shinzo Abe, did little to boost inflation expectations, taking issue with the absence of an exit scenario.

Inflation is not an imminent risk in Japan where the core consumer price index is just above zero percent and is projected to rise about 1 percent during Governor Haruhiko Kuroda's term to April 2023, the latest report showed. This bolsters the case for the BOJ to keep its easing steps and diverge from the Fed and the ECB.

"The risk of accelerating inflation is extremely limited in Japan unlike other nations facing such concerns," Kuroda said, citing the relatively slow recovery in demand and companies absorbing higher costs without passing them on to consumers as reasons for the "calm" inflation situation

Kuroda's remarks come as the recent sharp drop in COVID-19 cases and progress in vaccinations have raised hopes for a further reactivation of the economy.

The combination of a shortage of parts, higher energy and material costs as well as a weaker yen, however, is making things difficult for the BOJ.

The BOJ said the CPI has been pushed down significantly by sharply lower mobile charges, but it is expected to increase toward the end of this year due to higher energy prices. Major Japanese carriers started offering cheap plans in the face of government pressure.

On the one hand, positive CPI numbers come as a relief to the BOJ as it battles to accelerate inflation toward 2 percent in a country known for years of deflation. But on the other, households are sensitive to higher prices, which economists say could hurt consumer sentiment when domestic demand lacks strength.

The yen's weakness also cuts both ways as it boosts exporters' overseas profits when repatriated but also raises costs for importers.

Still, Kuroda dismissed the view that the yen's retreat is bad for the economy, saying, "Under the current economic and price conditions, the yen's weakening to this extent is no doubt a plus."

The U.S. dollar recently hit a four-year high in the upper 114 yen zone, sharply higher than the average assumed rate of 107.64 yen for the year to March that was mentioned in its Tankan business survey this month.