At 3,116 days in office, Haruhiko Kuroda on Wednesday became the Bank of Japan's longest-serving governor, tasked with navigating unprecedented challenges after years of unparalleled monetary easing, just as the country is set to have a new prime minister.

Under Kuroda, who took the post in March 2013, the BOJ has embarked on an asset-buying spree, gobbling up Japanese government bonds and exchange-traded funds to see its total assets more than quadruple in the eight years to March 2021 to around 715 trillion yen ($6.4 trillion), exceeding in size Japan's nominal gross domestic product, which stood at some 537 trillion yen in fiscal 2020. 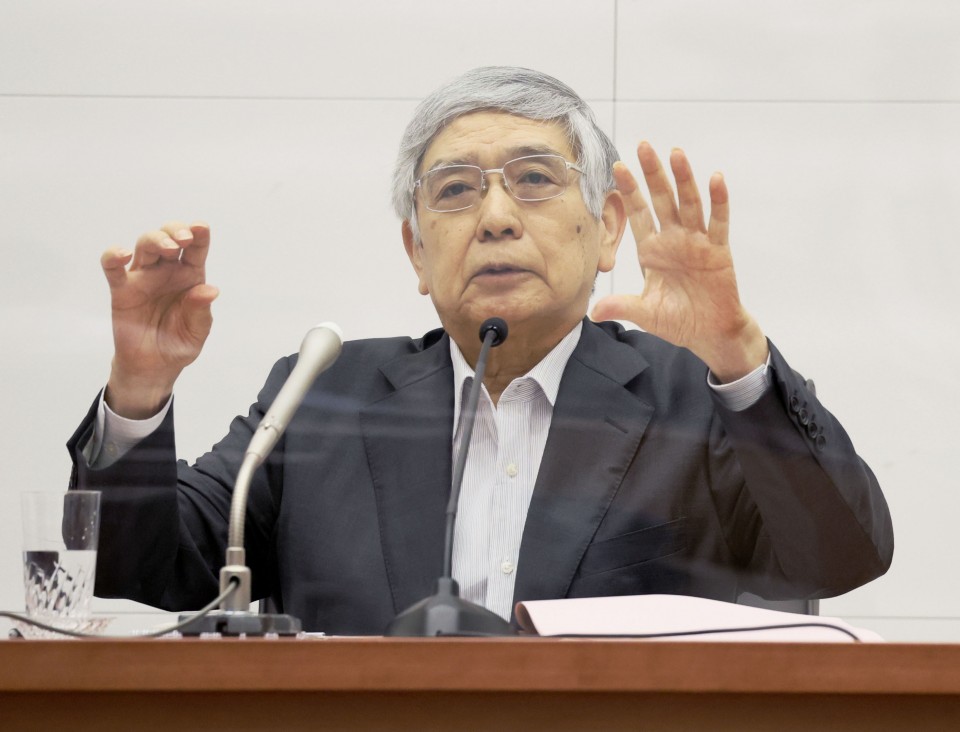 With its goal of achieving 2 percent inflation still out of reach, the central bank is seen as having no choice but to keep its accommodative policy in place longer than previously anticipated while its U.S. and European peers gradually prepare to whittle down crisis-mode stimulus.

Kuroda, 76, whose current term ends in April 2023, broke the previous record of 3,115 days from June 1946 to December 1954, held by Hisato Ichimada. The achievement came on the very day that the ruling Liberal Democratic Party chooses its new leader, who is all but certain to become the next Japanese prime minister.

The BOJ's monetary easing under Kuroda has been a key pillar of "Abenomics," an economy-boosting program spearheaded by then Prime Minister Shinzo Abe and continued by incumbent Yoshihide Suga. BOJ watchers say the next leader will not be as much of an advocate of reflationary monetary policy as Abe was during his tenure.

The BOJ's massive asset purchases, dubbed the "Kuroda bazooka" in financial markets, helped lift Japanese share prices and weaken the yen, coming as he pledged to achieve the 2 percent inflation target within around two years when he took the post.

"We should give Mr. Kuroda's bazooka credit for helping stop deflation caused by a strong yen, boost the price competitiveness (of Japanese products) and stem the hollowing-out of industry," said Junichi Makino, chief economist at SMBC Nikko Securities Inc.

The U.S. dollar traded below 80 yen before Kuroda, a former top currency diplomat for Japan and president of the Asian Development Bank, became BOJ governor. The currency is now trading around 110 yen levels, sharply higher than eight years ago.

Unable to attain the inflation target, the BOJ introduced in January 2016 a negative interest rate of 0.1 percent on some reserves it holds for commercial banks. In September that year, it adopted a "yield curve control" policy to keep the key 10-year government debt yield around zero percent.

Kuroda has defended the raft of policy steps taken so far, saying that, without them, Japan's economic growth and inflation rates would have been "much lower."

"It means that the way we have guided monetary policy to attain the 2 percent price stability target is right," Kuroda told a press briefing last week.

Japan's core consumer prices were flat in August despite higher commodity prices, ending 12 months of decline but lacking upward momentum. The latest report by the Organization for Economic Cooperation and Development projects the country's core consumer price index will dip 0.5 percent in 2021 and rise 0.3 percent the following year, both downgraded from its earlier projections in May.

"Keeping interest rates at low levels for an extended period brings with it some negative effects, including on smaller, regional banks, so it may become difficult for the BOJ to carry on with the easing steps as they are," Makino said.

In March, the BOJ fine-tuned its policy tools to brace for the prospect of prolonged monetary easing and minimize its side effects. One key change was that the BOJ allowed 10-year Japanese government bond yields to trade in a wider range than before, even under its yield curve control program to keep both short-term and long-term interest rates low.

It also removed a 6 trillion yen annual target for buying ETFs and made purchases more flexible within its 12 trillion yen upper limit, a move that some BOJ watchers view as a step toward tapering.

In the six months to September, there have been only two days when the BOJ bought ETFs, with the total amount coming to some 140 billion yen, the bank's data showed.

"The BOJ cannot start tapering (its asset-buying) explicitly but has been doing so without making it look like they are actually tapering," said Yuichi Kodama, chief economist at the Meiji Yasuda Research Institute.

"In terms of achieving the 2 percent target, the years of monetary easing under Mr. Kuroda can't get a passing grade," Kodama said. "The BOJ also needs to start thinking about laying the groundwork for eventual policy normalization, too, even if it has to wait to shift from its negative rate policy."

With Abenomics having relied heavily on monetary easing and fiscal stimulus, the BOJ's balance sheet has swollen, and it owned 44.1 percent of Japanese government debt at the end of June, with no ceiling on the Japanese central bank's purchases set.

In the months and years ahead, the BOJ will also need to consider what to do with its holdings of ETFs that have made the bank a huge presence in the Japanese stock market.

"If we reach a point where the goal (of monetary policy) is near, and we can discuss a monetary policy exit, we will naturally consider an exit for ETF purchases," Kuroda said last week. "At this point, we are still not there."

Financial markets are focused on how Kuroda will work with the next prime minister, who may take a step back from reflationary monetary policy.

"When Mr. Kuroda decided to go ahead with aggressive monetary easing at the incipient stage of Abenomics, it was a bold move," SMBC's Makino said. "We are not in a crisis situation that would require another bold decision (by the BOJ)."