The BOJ the same day kept its ultraeasy monetary policy intact as protracted COVID-19 restrictions and supply chain disruptions in Southeast Asia remain a drag on the economy.

"The Bank of Japan will continue to watch closely any change in market views on the debt issue and its impact on global financial markets," Kuroda told a press conference after a two-day policy-setting meeting. 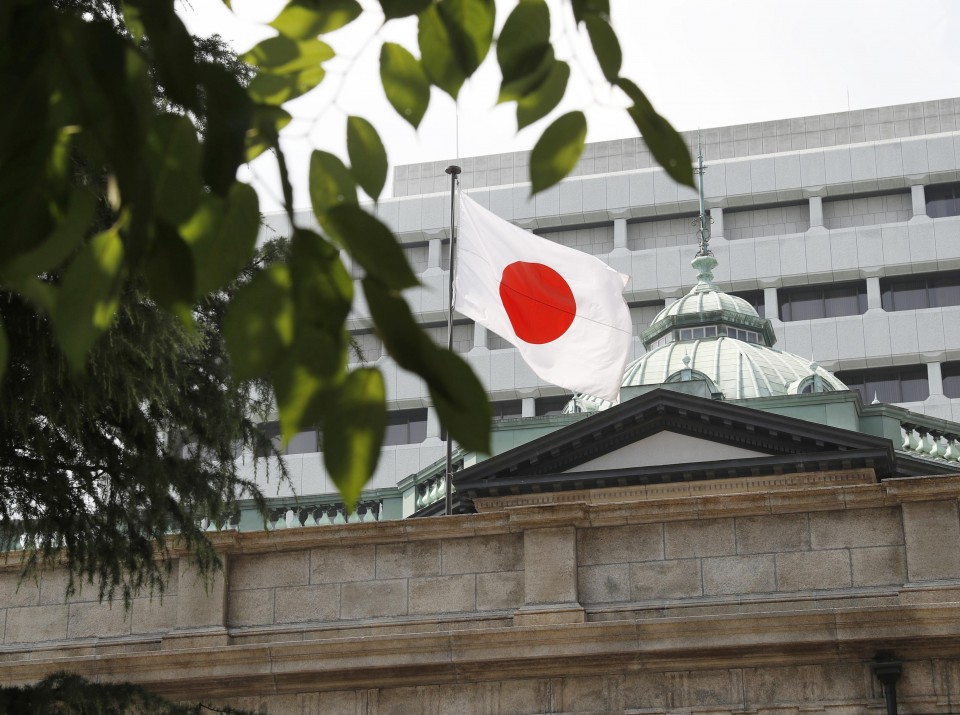 Photo taken in June 2019 shows the Bank of Japan headquarters in Tokyo. (Kyodo)

Japanese shares, which had risen sharply on expectations for fresh stimulus under a to-be-launched government following the resignation of Prime Minister Yoshihide Suga later this month, fell on Wednesday, with the 225-issue Nikkei stock index ending at its lowest level since Sept. 3.

Investors are on alert against the possibility of ripple effects that they fear could lead to another financial crisis, but Kuroda brushed aside concerns about any spillover effects at this point.

"It's appropriate to see this as an issue related to the company concerned and also China's real estate industry," Kuroda said, noting that the development came after years of the sector's rapid expansion. 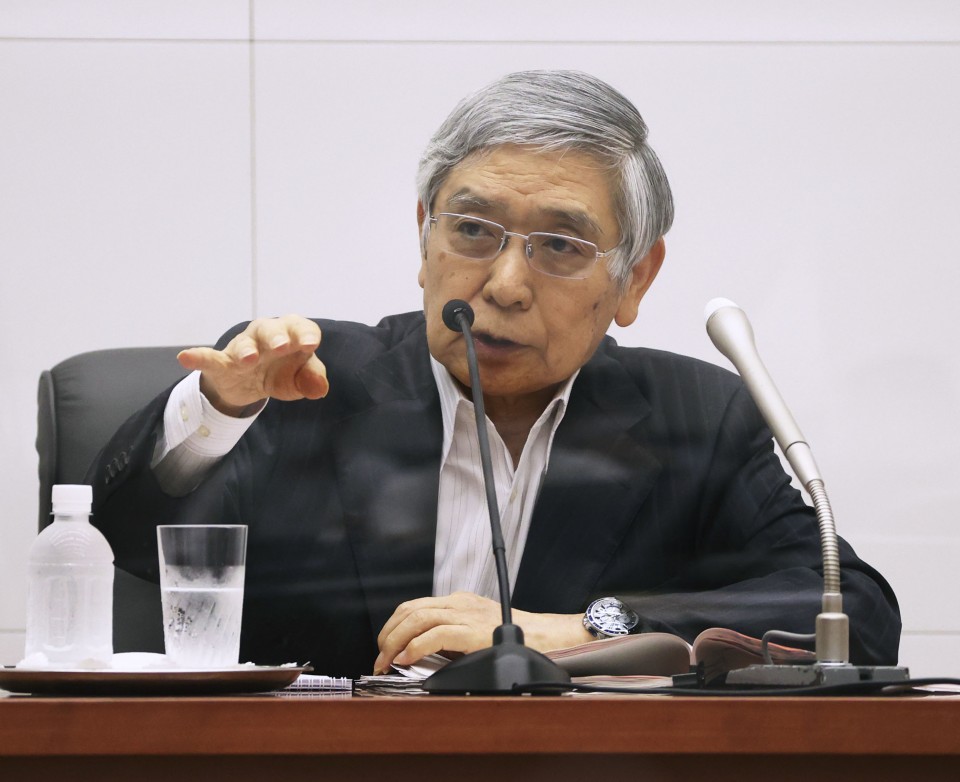 Bank of Japan Governor Haruhiko Kuroda speaks at a press conference after a policy-setting meeting on Sept. 22, 2021, in Tokyo. (Pool photo)(Kyodo)

"We will continue to follow developments in the Chinese economy," Kuroda said.

At the end of the policy-setting meeting, the BOJ acknowledged supply-side constraints on exports and industrial output, key drivers of the economy. However, Kuroda took a cautiously optimistic view that such negative impact should only be temporary.

The Japanese central bank stuck to its overall assessment of the economy as picking up even in a "severe situation," as it decided to keep short-term interest rates at minus 0.1 percent and continue guiding 10-year Japanese government bonds yields around zero percent, as widely expected.

"In the face of heightened uncertainty, we partially revised our economic outlook...but there is no change to the trend that (the economy) is picking up," Kuroda told a press conference after the policy meeting.

The BOJ's meeting came a week before the ruling Liberal Democratic Party elects its new president, who will almost certainly become Japan's next prime minister as incumbent Yoshihide Suga's current term as LDP leader expires at the end of this month.

All four candidates in the LDP race recognize the need to keep crisis-mode support for the pandemic-hit economy with financial markets looking for any hints of change from "Abenomics," introduced by former Prime Minister Shinzo Abe and carried on by Suga, which relies heavily on bold monetary easing and fiscal stimulus.

Looking ahead, the economy is likely to recover as the impact of COVID-19 wanes and vaccinations progress even as economic activity, mainly in the services sector, will be lower than before the pandemic, for the time being, the bank said.

The BOJ stands in stark contrast with its peers in the United States and Europe, where the reopening of economies has led to a debate over when to shift from crisis mode.

The Japanese central bank said it will maintain support for companies struggling with the fallout of the pandemic so they can gain access to necessary funds.

The spread of the highly contagious Delta variant of the novel coronavirus has forced the Japanese government to place prefectures with relatively high infection numbers under a state of emergency.

The current declaration is due to end on Sept. 30, and the government is considering lifting it partially or entirely, government and ruling party sources said Tuesday.

Casting a pall over the outlook for a recovery led by manufacturers, a global semiconductor crunch and factory shutdowns in Southeast Asia due to the spread of COVID-19 have made it difficult for Japanese carmakers, including Toyota Motor Corp. and Honda Motor Co., to secure enough parts, leading to sharp output cuts.

Soaring material costs are another source of headache for Japanese companies as they appear reluctant to pass them onto consumers by raising prices, which would squeeze their profits. Recent sharp gains in wholesale prices have yet to translate into higher consumer prices in Japan.

The situation in the United States is different as inflation has accelerated, and investors are fixed on when the U.S. Federal Reserve will start trimming asset-buying and raising interest rates.

Years of aggressive easing brought the BOJ no closer to its 2 percent inflation target, and Japan's core consumer prices, excluding volatile fresh food, a gauge of inflation, fell for the 12th straight month in July.

Under such circumstances, BOJ watchers say the central bank will keep its accommodative policy regardless of who becomes Japan's next prime minister, while the inflation target has become all the more elusive.

Asked about the possibility of reviewing an accord reached between the government and the BOJ in 2013 to break with deflation, Kuroda said both parties have carried out necessary policy steps, which have played an "important role" in supporting the economy.

"With this view, the Bank of Japan will guide monetary policy appropriately," Kuroda said. In the agreement, the BOJ pledges monetary easing in pursuit of the 2 percent inflation target.

Vaccination minister Taro Kono, a leading candidate in media polls, has said that attaining the 2 percent inflation target would be "very difficult" under current conditions but added that monetary policy should be left to the central bank.

Another contender, Fumio Kishida, a former foreign minister and long considered a fiscal hawk, believes the 2 percent target is a "global standard" and should be maintained, while former communications minister Sanae Takaichi, who is close to Abe, wants to build on Abenomics.

After the policy meeting, the BOJ unveiled disclosure requirements for financial institutions seeking to receive zero-interest funds for their loans and investments to tackle climate change under the central bank's new program.

Information on governance, as well as targets and results for the funds spent, need to be reported.