All four contenders in the ruling Liberal Democratic Party's presidential election vowed Wednesday to double Japan's budget for children if they are elected the successor to Prime Minister Yoshihide Suga as the country struggles to address its persistently low birth rate.

Former Foreign Minister Fumio Kishida, vaccination minister Taro Kono and LDP executive acting secretary general Seiko Noda also agreed on the need to create an agency for spearheading policies on children during a debate held ahead of the Sept. 29 vote that effectively decides the country's next prime minister. 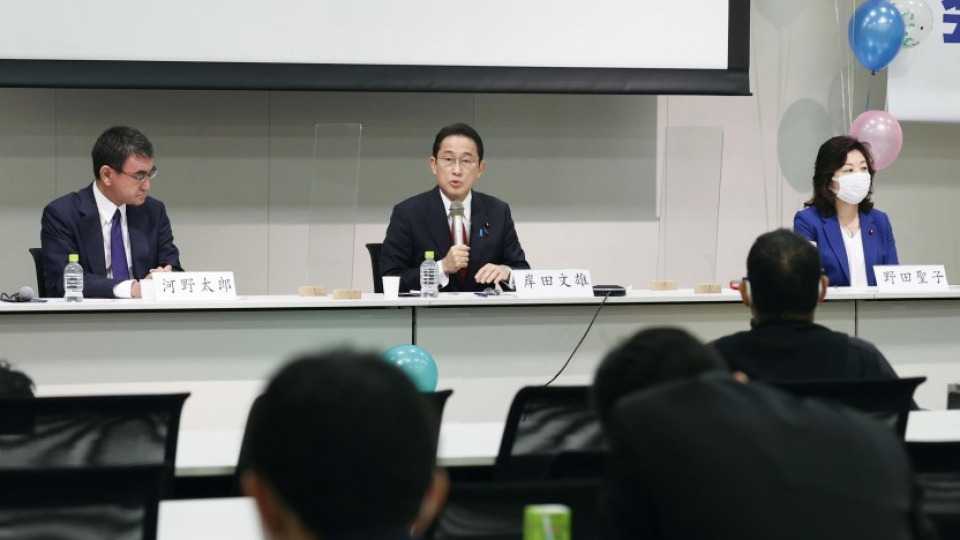 (From L) Taro Kono, Fumio Kishida and Seiko Noda, three of the four candidates running in the presidential election of Japan's ruling Liberal Democratic Party, attend a debate in Tokyo on Sept. 22, 2021, on the establishment of a new government agency to deal with issues related to children. (Kyodo) ==Kyodo

Former communications minister Sanae Takaichi, who joined the session through a video message, said she will "consider creating an organization for effectively promoting children's policies" without referring to the agency sought by Suga.

Japan has ranked low among Organization for Economic Cooperation and Development countries in terms of public spending on child education, while its child poverty rate remains higher than the average among OECD members.

In the debate, Kono said, "I will realize zero child suicides, deaths from abuse and poverty of children."

Kishida said he will consider appointing a minister dedicated to the envisioned children's agency and the other candidates agreed, while Noda said she will aim to submit bills for creating the agency during the regular Diet session next year.

Takaichi said she will ease the burden of childrearing by providing tax breaks for users of babysitters.

Suga, who announced his resignation earlier this month, has sought to create the children's agency to coordinate child policies on medical and educational services and those handled by police.

In pursuit of the plan, the government has set up a panel to consider its establishment and is aiming to compile a basic plan for the agency by the end of the year.

But as details such as when it will be launched, its authority and size have yet to be decided, the government under Suga's successor will have to make those decisions.

The new LDP president is almost certain to be elected prime minister in the Diet as the LDP controls the powerful House of Representatives.