Three of the four candidates vying to be Japan's next prime minister said Monday that summit talks with North Korean leader Kim Jong Un are necessary to resolve the long-standing issue of Japanese nationals abducted by Pyongyang decades ago.

Kono and Kishida, seen in media polls as leading contenders in the Sept. 29 Liberal Democratic Party presidential election, said Japan will cooperate with the United States and other countries to break the impasse over the issue. 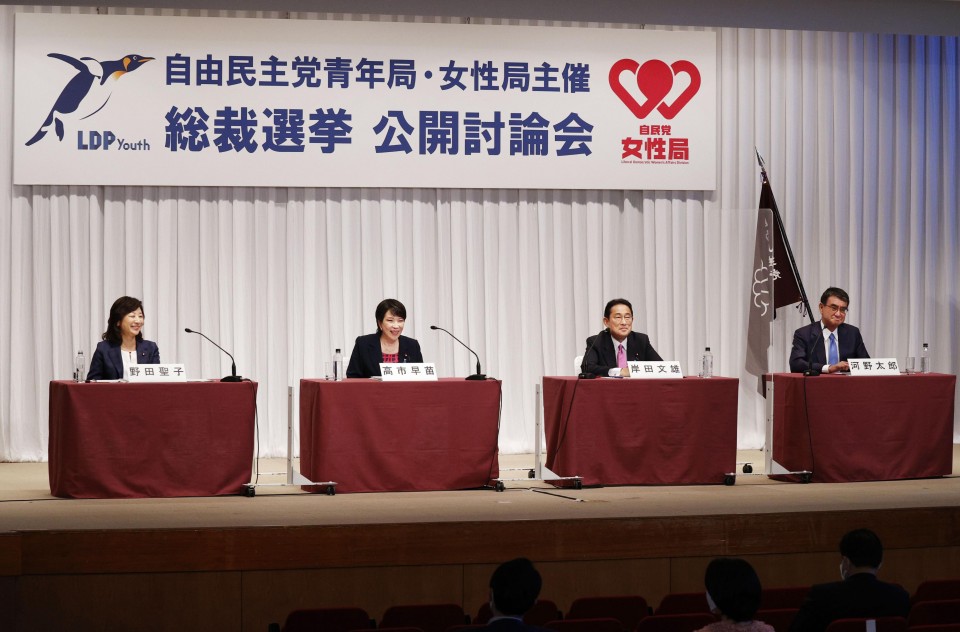 "We need summit talks when we deal with countries like North Korea that have very peculiar political systems," Kono said during the forum, organized by the LDP Women's Affairs Division and the Youth Division.

"We need to create an environment for talks with North Korea by exchanging views with the United States, China, South Korea and Russia and making sure we are headed in the same direction," said Kono, currently the vaccination minister.

Kishida said, "It's important to come up with a scenario for summit talks while coordinating with the (U.S. President Joe) Biden administration over North Korea."

"Mindful that it's a race against time, we should step up work," he said, alluding to the fact that family members of the abductees are getting older.

The LDP vote will effectively decide the successor of outgoing Prime Minister Yoshihide Suga as the party currently controls the House of Representatives, the powerful lower chamber of parliament.

Kono and Kishida served as foreign ministers under the administration of former Prime Minister Shinzo Abe, who failed to hold talks with Kim despite his desire to do so.

No visible progress was seen in the Suga government, either. Tokyo and Pyongyang have no diplomatic ties.

Japan officially lists 17 nationals as having been abducted by North Korean agents but suspects their involvement in many more disappearances.

While five were repatriated in 2002, Japan continues to seek the return of the remaining 12. Of the 12, Pyongyang claims eight have died, and four others never entered the country.

Takaichi, considered the most conservative among the four candidates, said she will seek a summit with the North Korean leader by using "all possible routes" because the abduction issue is a top priority.

"I would hold one-on-one talks, whatever it takes, even if it means that I have to go there," said the former minister of internal affairs and communications.

Noda, the LDP's executive acting secretary general, took issue with Japan's capability to gather intelligence by itself, saying that improving it is a requisite for solving the abduction issue.

The roughly 90-minute forum dealt with a range of issues from Japan's graying society and declining birth rate, support for those struggling with the fallout of the coronavirus pandemic and reform of the ruling party.

The next prime minister after Suga, who is stepping down when his term ends this month, needs to tackle the challenges posed by the country's changing demographics.

The annual number of newborns hit a fresh record low of 840,832 in 2020, and the average number of children a woman will bear in her lifetime fell for the fifth straight year to 1.34.

Noda has put care for the vulnerable at the forefront of her policy agenda, with a pledge to set up a new government agency to deal with issues related to child-rearing and the country's falling birth rate.

During the forum, Kono said the government should consider "direct support" for households with multiple children to alleviate their concerns about future education costs.

Kishida said the government should help such households with education and housing expenses.

Takaichi said that if elected, the government will offer tax breaks when households seek the help of babysitters and housekeepers.