The Tokyo Game Show started Thursday east of the capital, with a physical exhibition open to a select group of guests for the first time in two years and a virtual setup for game enthusiasts who wish to attend remotely.

The annual gaming extravaganza, one of the world's biggest shows of its type, attracted media and game influencers to Chiba's Makuhari Messe convention center, allowing them to try out new titles on display and interview exhibitors. The event was held entirely online last year due to the coronavirus pandemic. 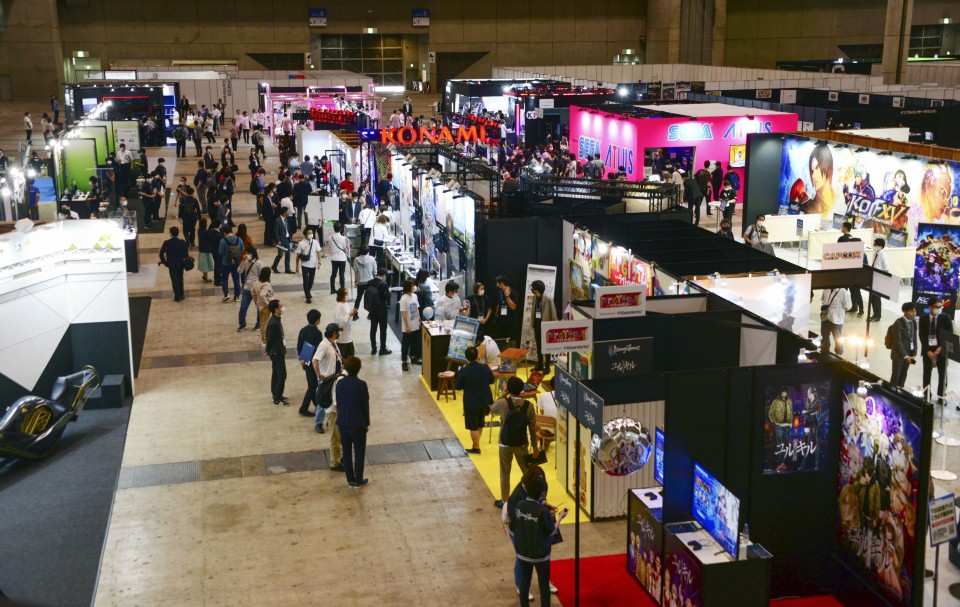 The Tokyo Game Show opens at the Makuhari Messe convention center in Chiba on Sept. 30, 2021. (Kyodo)

In the four-day event through Sunday, about 350 companies from Japan and abroad, including local gaming giants Capcom Co. and Bandai Namco Entertainment Inc., exhibit their latest titles. Those interested can watch presentations online for free.

Among content to be streamed is the latest information about popular series such as Square Enix Co.'s "Final Fantasy" and Capcom's "Monster Hunter," the organizer said.

At the new virtual space set up, featuring some 40 booths, fans can log in to peruse exhibitions using avatars through a virtual reality terminal, the organizer said.

General visitors can buy access to visit booths online, tour the venue, join events and communicate with other participants.

"The event was held entirely online last year but we received a lot of requests from the general public saying they wanted to try out the games and learn more about them," said Yoshihiko Yoshimoto, a spokesman of the Tokyo Game Show management office.

"So this year, we prepared a real venue and invited media and influencers to present the details of the game," he said.

The programs will be streamed on various platforms such as YouTube and Chinese video live streaming service DouYu so fans can join the show from overseas, the organizer said.

Before the coronavirus pandemic, the annual event, along with E3 in the United States and Gamescom in Germany, attracted large numbers of gamers, including some who cosplay as game characters.