The Tokyo Paralympics closed Sunday night after nearly two weeks of competition among athletes with impairments from around the world, bringing down the final curtain on the Summer Games, held despite many challenges stemming from the coronavirus.

The closing ceremony at the National Stadium concluded the games staged almost entirely off-limits to the public as a result of the pandemic that threw eight years of preparations into disarray.

As was the case with the Olympics that ended Aug. 8, the ceremony took place in front of a sea of empty seats, with only a number of officials and dignitaries, including Japanese Crown Prince Fumihito and Tokyo Gov. Yuriko Koike, in attendance.

In a departure from the opening ceremony format, athletes were already seated in the middle of the stadium from the beginning, cheering and clapping, with only the designated flagbearers marching into the venue. 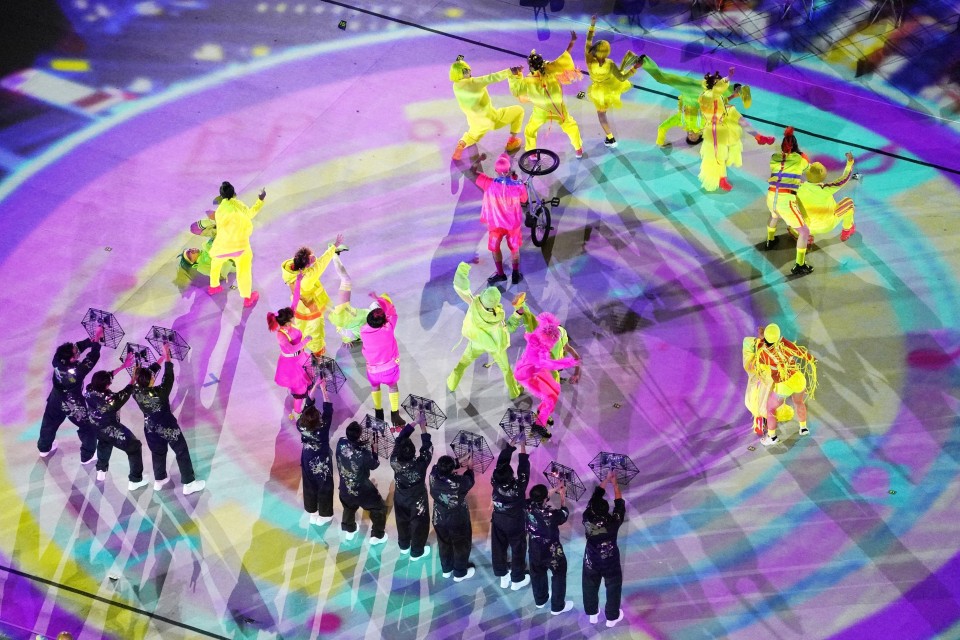 Performers take part in the closing ceremony of the Tokyo Paralympics at the National Stadium in Tokyo on Sept. 5, 2021. (Kyodo) ==Kyodo 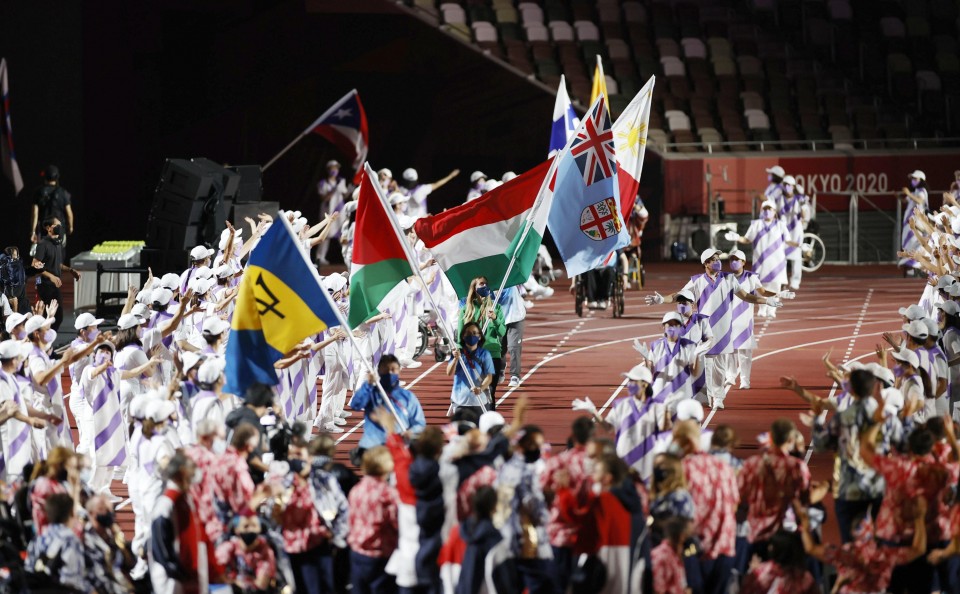 Flag bearers of participating countries parade during the closing ceremony of the Tokyo Paralympics on Sept. 5, 2021, at the National Stadium in Tokyo. (Kyodo) ==Kyodo 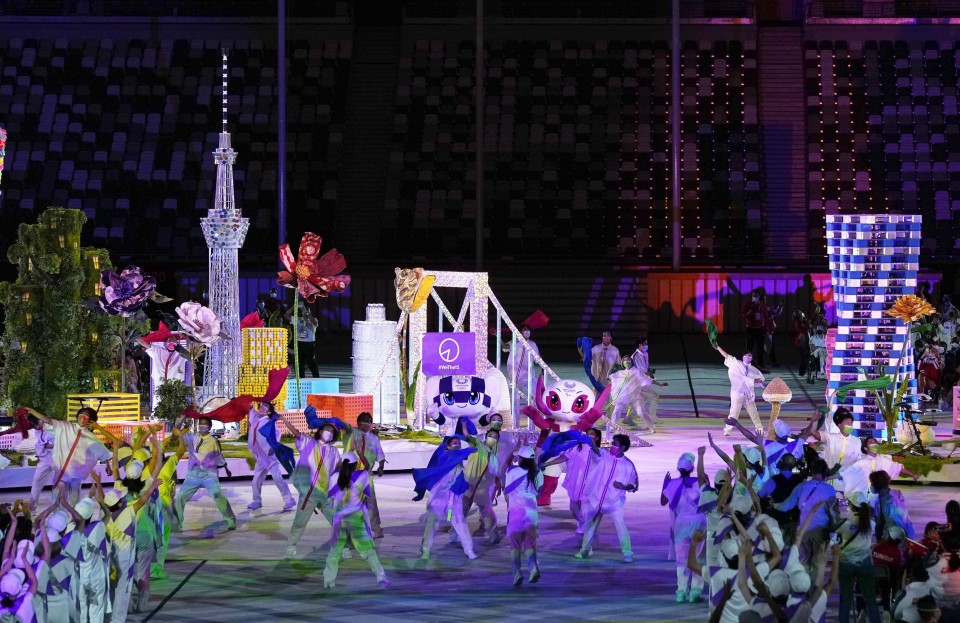 Performers take part in the closing ceremony of the Tokyo Paralympics at the National Stadium in Tokyo on Sept. 5, 2021. (Kyodo) ==Kyodo

As part of a music and dance performance, colorful projections transformed the ground inside the stadium into images ranging from Tokyo's iconic Shibuya crossing to the screen of a video game.

Navigating a range of obstacles including COVID-19 travel protocols, a record number of approximately 4,400 athletes from 162 countries and regions, plus a small refugee team, competed at the Paralympics from Aug. 24.

They included two competitors evacuated from Taliban-controlled Afghanistan, who carried the flag at the closing ceremony after arriving in Tokyo during the games thanks to a multinational effort. 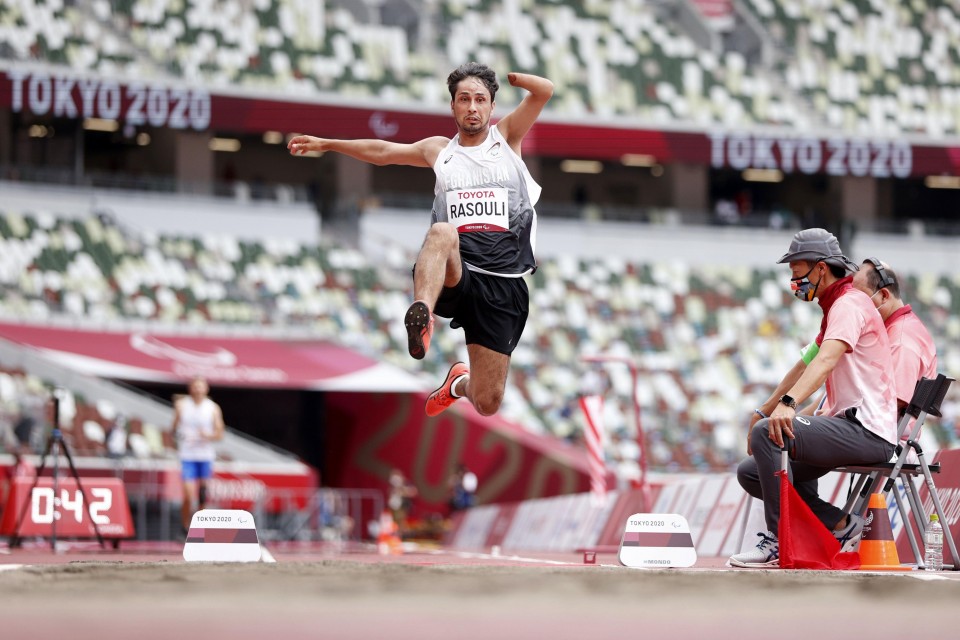 Hossain Rasouli of Afghanistan competes in the men's T47 long jump event at the Tokyo Paralympics at the National Stadium in Tokyo on Aug. 31, 2021. (Kyodo)

Following an unprecedented one-year postponement, uncertainty had lingered about whether the Olympics and Paralympics could be held safely amid rising COVID-19 cases in Japan and across the world.

The public was split over the decision by organizers to plow ahead with staging the games this summer, with Japanese Prime Minister Yoshihide Suga abruptly announcing Friday plans to resign after facing criticism for his government's handling of the health crisis. 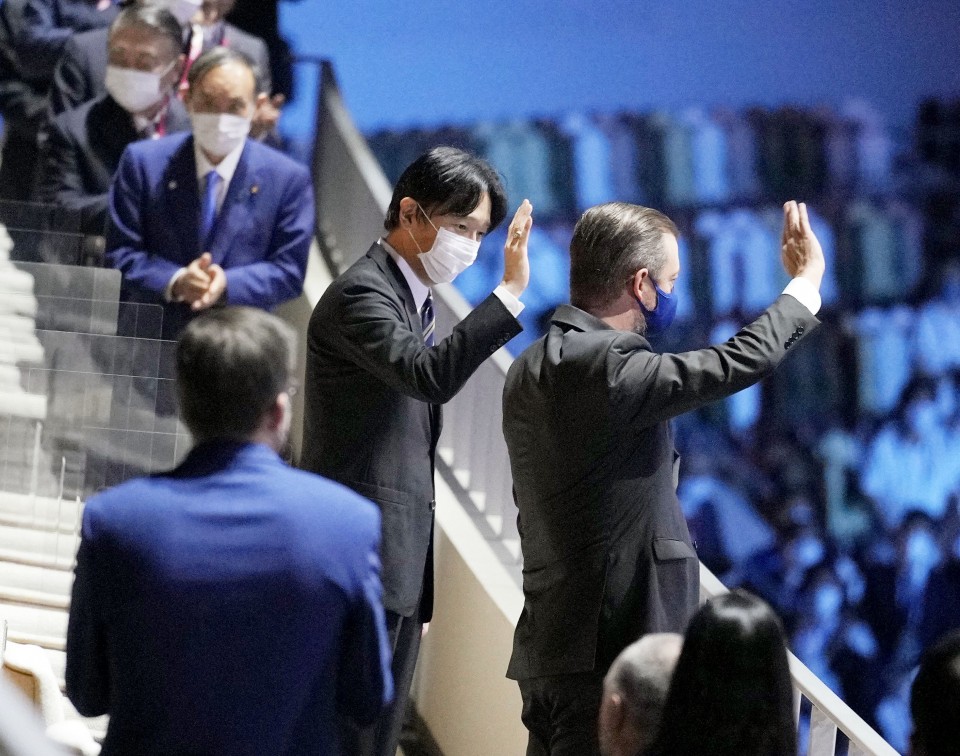 To stop the spread of the virus, delegations were virtually confined to the athletes' village and sports venues, with foreign participants required to leave Japan soon after their final events.

Despite the raft of scandals that beset the Olympics leading up to the opening ceremony on July 23, the two games had no major operational troubles over the more than one-month period.

But the number of new COVID-19 cases in Tokyo and other parts of Japan hit record highs multiple times during and after the Olympics, while the organizers managed to keep the infection rate among athletes and workers very low.

Since mid-August, about 300 people associated with the Paralympics tested positive for COVID-19, most of whom were Japanese residents and contractors. 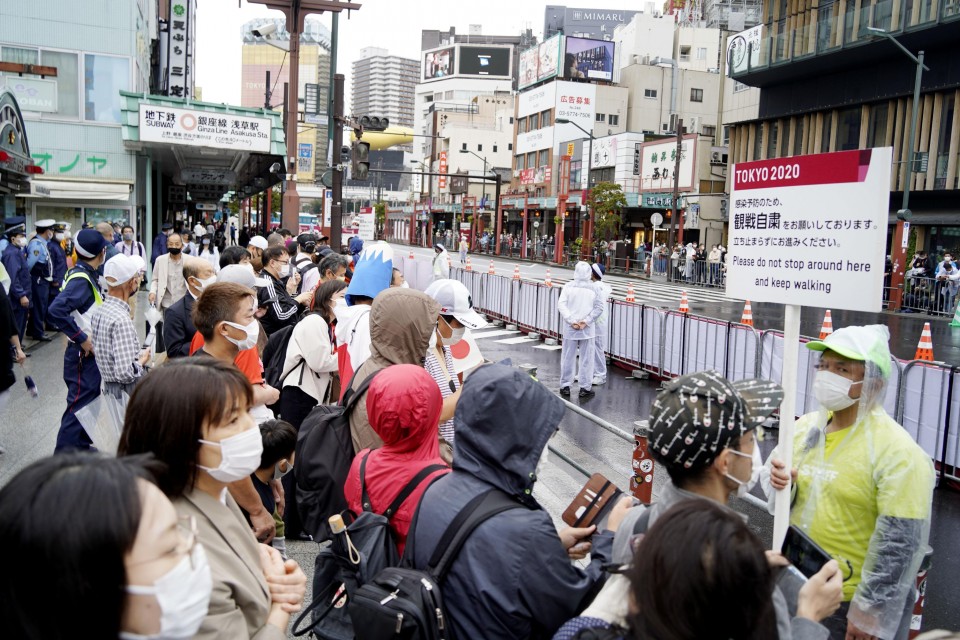 A staffer holds a placard asking people not to stop walking as many people gather near the Tokyo Paralympic marathon course on Sept. 5, 2021, in Tokyo's Asakusa area. (Kyodo)

At the closing ceremony, the Paralympic flag was passed to Paris Mayor Anne Hidalgo as representative of the 2024 Summer Games in the French capital, before the cauldron in the 68,000-capacity main venue was extinguished.

Lauding the athletes for their efforts, Seiko Hashimoto, organizing committee president, said they had helped make the games a success "in the face of such difficult circumstances."

"We were overwhelmed by your astonishing performances. We saw your conviction, determination and unending hard work as you refused to set yourselves limits," Hashimoto said.

"We must see beyond the athletes that have performed so well here and see the 1.2 billion persons with disabilities. They can, and they want, to be active citizens in an inclusive world," said Parsons, before declaring the games officially closed. 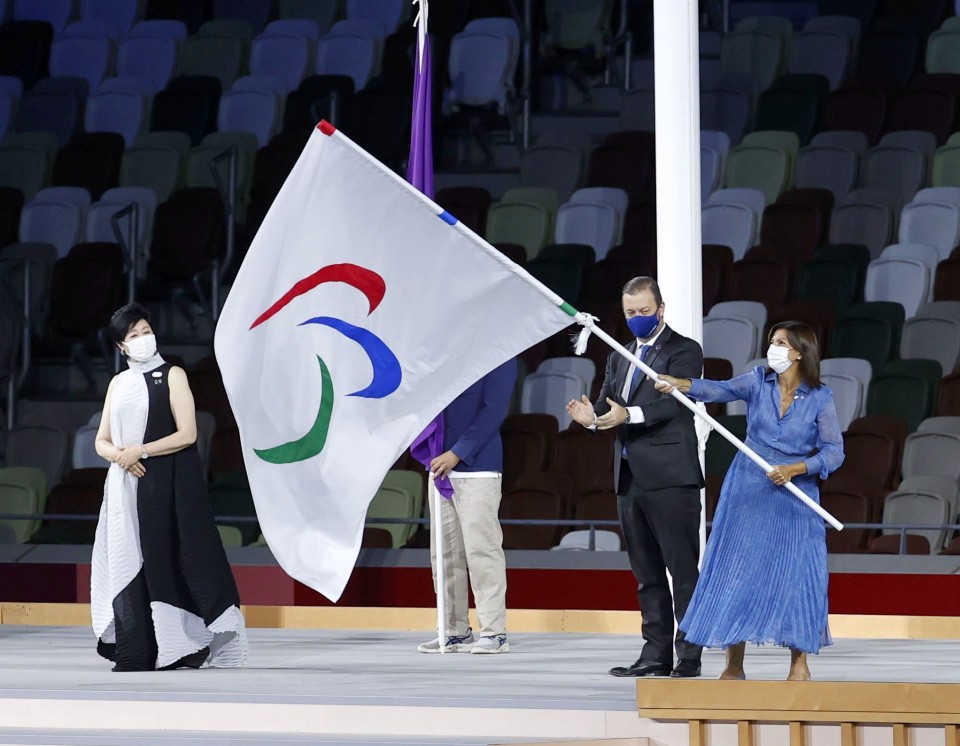 Paris Mayor Anne Hidalgo (R) waves the Paralympic flag after receiving it from International Paralympic Committee President Andrew Parsons (2nd from R) during the closing ceremony of the Tokyo Paralympics at the National Stadium in Tokyo on Sept. 5, 2021. (Kyodo) ==Kyodo

China, which will host the Beijing Winter Olympics and Paralympics in February and March, finished top of the medal table by a big margin, winning 96 gold, 60 silver and 51 bronze, followed by Great Britain, the United States and the Russian Paralympic Committee.

The Paralympics consisted of 539 medal events across 22 sports. Taekwondo and badminton were added to the games for the first time. 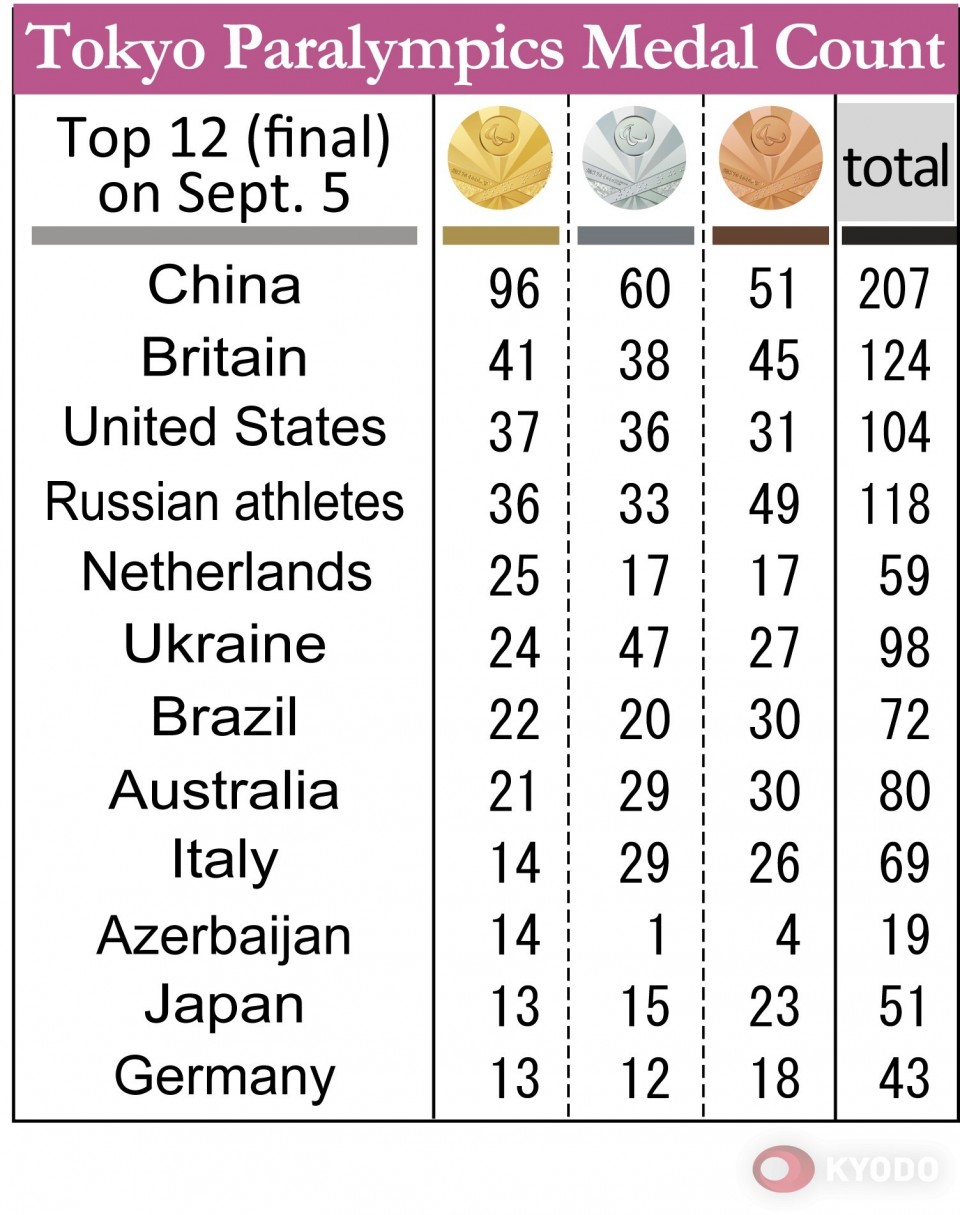 After failing to win a single gold medal at the 2016 Rio de Janeiro Paralympics, Japan put on a stronger showing as host nation. Fielding its largest-ever team of 254 athletes, it finished 11th on the medal table with 51 medals -- 13 gold, 15 silver and 23 bronze -- its second-biggest haul from a Paralympic Games.

Swimmer Miyuki Yamada won the host nation's first medal on the opening day of competition, taking silver in the women's 100-meter backstroke S2 class and becoming the youngest Japanese ever to reach the Paralympic podium at just 14.

While the games were mostly held behind closed doors, some students involved in a government-supported educational initiative were allowed to spectate at some events.

At the end of the closing ceremony, a chorus including a sign-language performer sang "What a Wonderful World," after which the spherical cauldron closed and fireworks lit the sky, with screens inside the stadium displaying the word "Arigato," meaning "thank you" in Japanese.