The Tokyo Olympics closed Sunday night after more than two weeks of competition held amid extraordinary restrictions and mostly behind closed doors, with athletic feats performed for a world still struggling against the coronavirus.

Hundreds of athletes gathered in a nearly empty National Stadium to bid farewell to the largest global sporting event since the start of the pandemic early last year and to a games that looked like no other in history.

"You inspired us with this unifying power of sport. This was even more remarkable given the many challenges you had to face because of the pandemic," International Olympic Committee chief Thomas Bach told athletes before he declared the end of the 17-day games in a made-for-TV ceremony.

SEE THE CEREMONY IN PHOTOS HERE 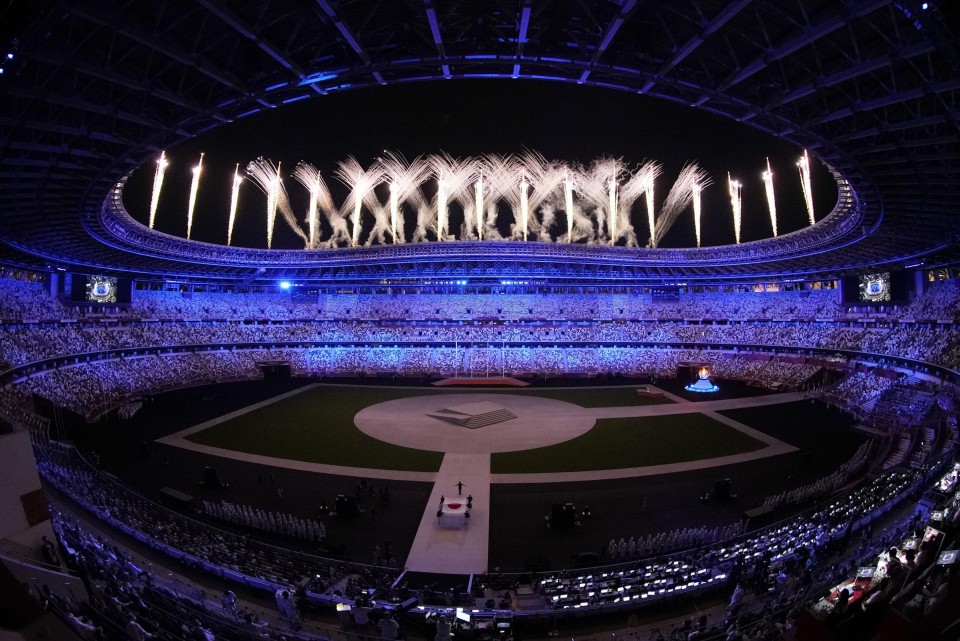 Fireworks soar above the National Stadium during the closing ceremony of the Tokyo Olympics on Aug. 8, 2021. (Kyodo) ==Kyodo 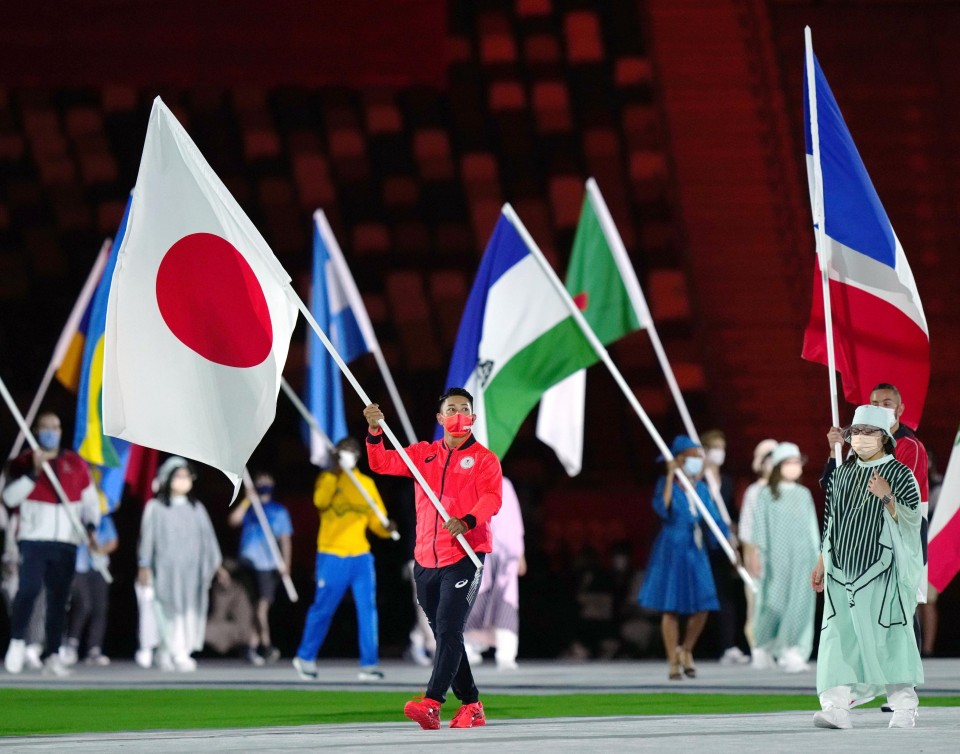 Ryo Kiyuna (C), the men's karate kata gold medalist, carries the Japanese flag during the closing ceremony of the Tokyo Olympics on Aug. 8, 2021, at the National Stadium. (Kyodo) ==Kyodo

The flame that was lit in Greece ahead of the unprecedented postponement of the games in March 2020 and burned in a sphere-shaped cauldron throughout the games was extinguished. Soon after, more than 1,000 fireworks burst into the Tokyo sky.

"For the first time since the pandemic began, the entire world came together. Sport returned to center stage," Bach said. "The Olympic Games Tokyo 2020 are the Olympic Games of hope, solidarity and peace." 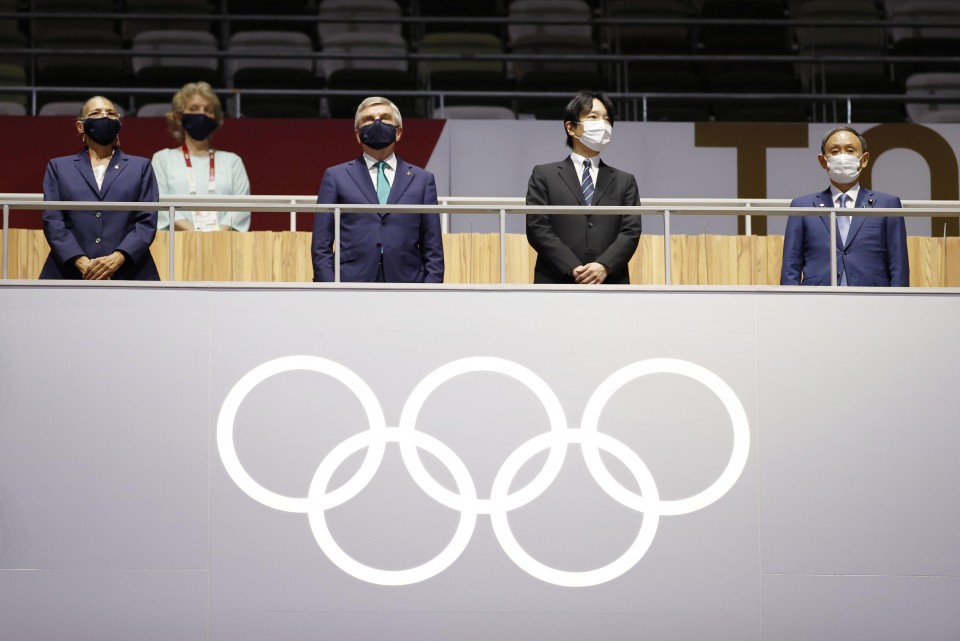 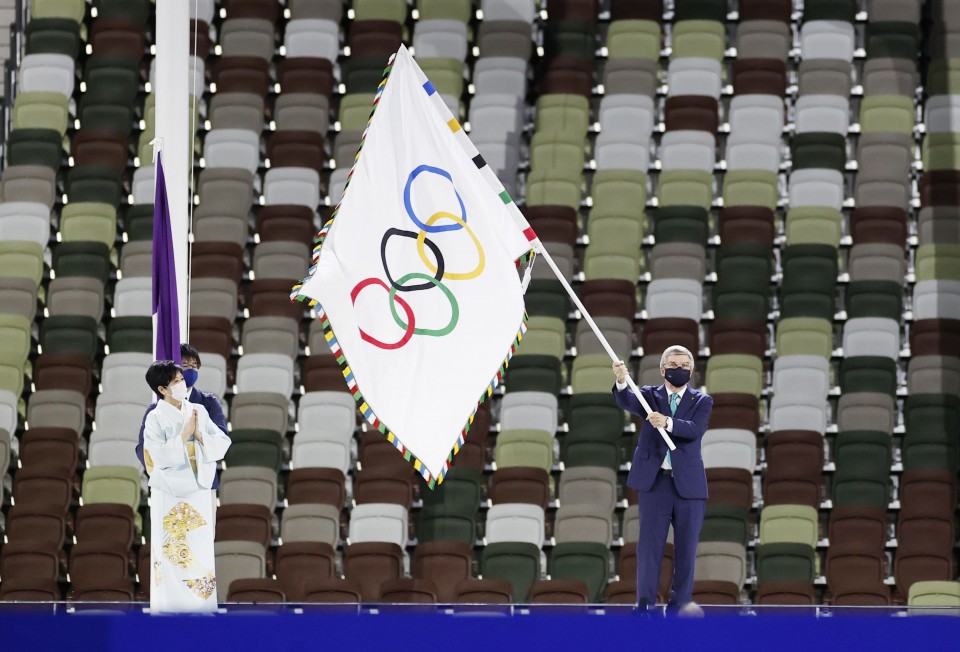 Attended by Crown Prince Fumihito, the younger brother of Emperor Naruhito, the ceremony saw the Olympic flag that was raised at the 68,000-seat stadium during the opening ceremony lowered. Tokyo Gov. Yuriko Koike handed it to Bach, who in turn passed it to Paris Mayor Anne Hidalgo, transferring the baton to the host city of the next Summer Games in 2024.

The United States, led by its star swimmers, topped the gold medal standings with 39, one more than China that is preparing for its own games in six months' time when it stages the Winter Olympics in Beijing. 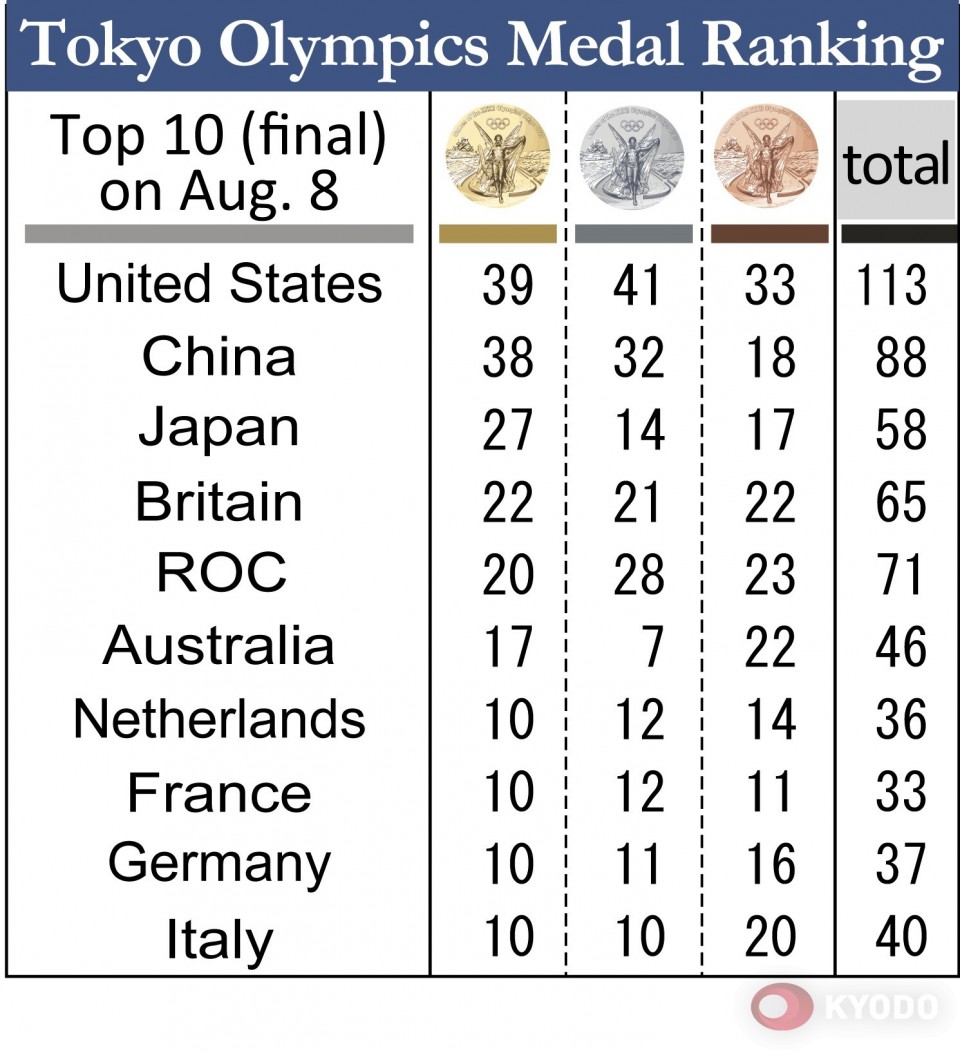 Japan, which finished third, had its best overall Olympic performance ever with a record 58 medals, including its most gold with 27. It dominated judo with nine gold medals and topped the podium in three of the four events in skateboarding, one of the new sports added to the games program.

Since opening on July 23, about 11,000 athletes from over 200 countries and regions competed in Tokyo and some other parts of Japan while following anti-virus rules such as taking daily COVID-19 tests and limiting their movements largely to venues and the Olympic village.

"There are no words to describe what you have achieved in Tokyo. You have accepted what seemed unimaginable, understood what had to be done, and through hard work and perseverance overcome unbelievable challenges," Seiko Hashimoto, president of the organizing committee, said at the ceremony.

"Tonight the Olympic flame that has lit up Tokyo will quietly go out. But the hope that has been ignited here will never be extinguished," she said, adding that the capital is preparing to now host the Paralympics from Aug. 24 to Sept. 5.

The presence of spectators would have made the occasion more festive, but there were still plenty of cheers heard from the athletes on the field, with a limited number of media and associated staff in the stands.

During the ceremony, titled "Worlds We Share," Ryo Kiyuna, who claimed Japan's first karate gold medal, carried the flag of the host country into the stadium that was transformed into a grassy space resembling a Tokyo park to allow athletes, who were unable to go out to see the sights, to get a virtual taste of life in the capital.

Athletes, wearing face masks, walked together into the stadium en masse, while observing physical distancing. Video footage submitted by fans from around the world who could not attend the venues was played on big screens.

The five Olympic rings were created by swirling lights, before live music, including hit song "Sukiyaki," made internationally popular by the late Japanese singer Kyu Sakamoto in the 1960s, and dance performances from many parts of the country rocked the stadium. 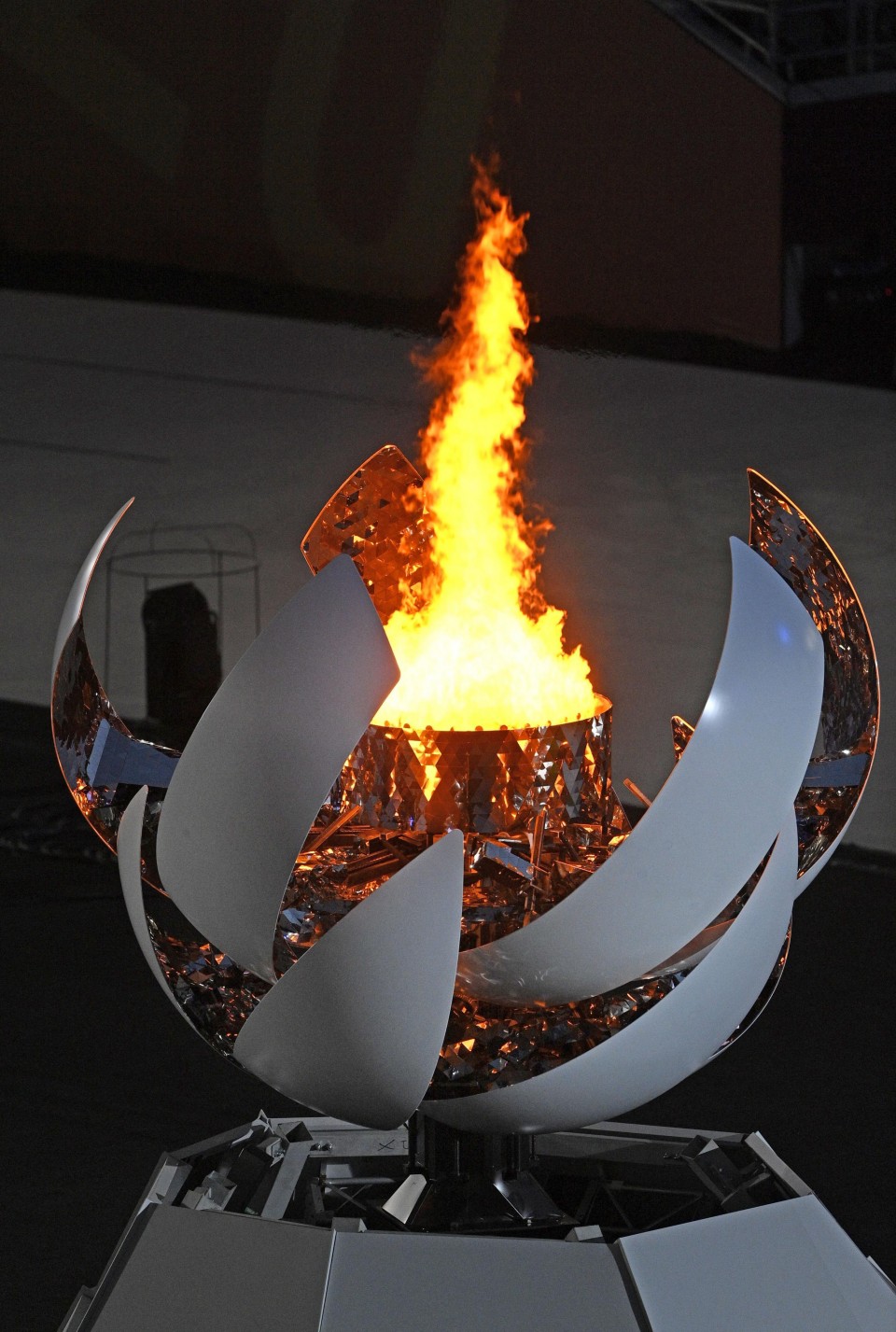 Photo taken Aug. 8, 2021, shows the Olympic flame at the National Stadium ahead of the Tokyo Olympic closing ceremony. (Kyodo) ==Kyodo 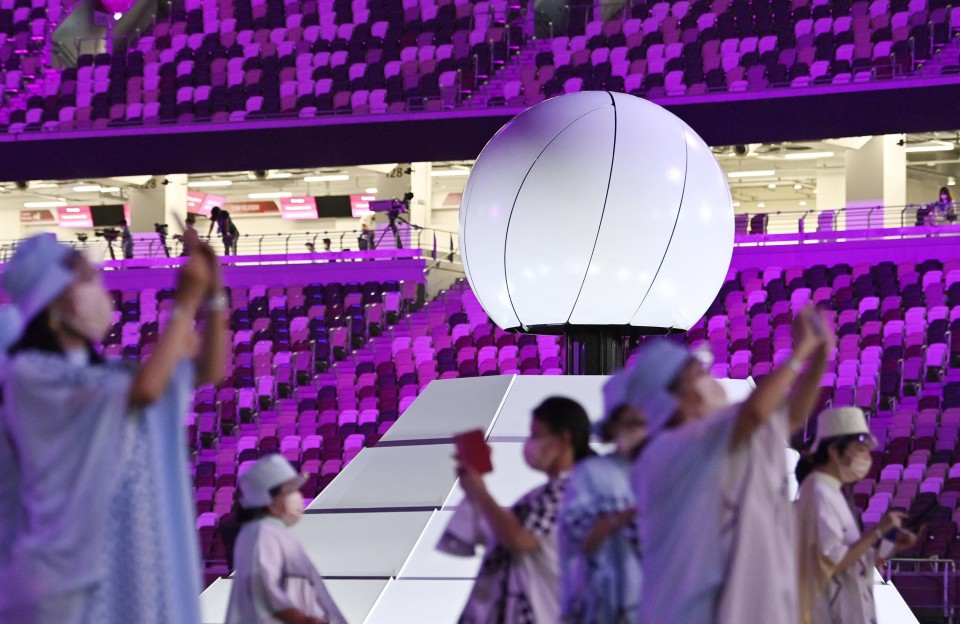 The Olympic flame is extinguished during the closing ceremony of the Tokyo Olympics on Aug. 8, 2021, at the National Stadium. (Kyodo) ==Kyodo

An artistic segment by Paris featured video displaying famous landmarks and fighter jets performing a flyover and trailing a tricolor of smoke over the French capital.

It showed crowds gathering, dancing and celebrating near the Eiffel Tower, including three-time Olympic judo gold medalist Teddy Riner and other athletes who had returned from Tokyo.

The Olympics featured 33 sports made up of 339 medal events, with karate, surfing, skateboarding and sport climbing making their debut.

Outside of the village, touted by officials as a "parallel world," the host city continued to report surging infections, with a record-high 5,042 confirmed Thursday and medical experts warning that the games may have led the public to underestimate the severity of the situation.

Prime Minister Yoshihide Suga early in the month expanded a COVID-19 state of emergency, which only covered Tokyo and Okinawa before the Olympics, to three prefectures adjacent to the capital, as well as Osaka.

While Suga has warned that "infections are spreading at a speed we have never experienced before," he has insisted there is no link between the Olympics and the surge, driven by the more contagious Delta variant of the coronavirus.

The daily count of coronavirus infections has more than doubled from before the start of the Olympics. But since the beginning of July, the organizing committee has reported only a total of 430 COVID-19 cases among those associated with the games, including just 29 athletes.

With the Japanese public skeptical about holding the games this summer amid the pandemic, the Olympics, previously held in the Japanese capital in 1964, provided athletes with unique challenges, including, most notably, the absence of vocal crowds.

Japan's heat and humidity, meanwhile, turned into a nightmare for some athletes as the mercury regularly topped 30 C, forcing schedule changes to tennis, the women's soccer final and the women's marathon.

With an emphasis on gender diversity, the Olympics also saw its first-ever openly transgender woman compete in weightlifting, while multiple new mixed-gender events were introduced to the program. U.S. gymnastics superstar Simone Biles' withdrawal from many of her events also sparked discussion about athletes' mental health.