As the Tokyo Paralympics came to a close on Sunday, athletes were full of praise for the experience of competing in the Japanese capital, but the public expressed mixed views about the games that were staged amid the coronavirus pandemic.

Following a one-year postponement, the Paralympics featuring roughly 4,400 athletes from some 160 countries were organized under extraordinary measures to prevent the spread of the virus.

"It's been different. It's not been the same games that we were used to," said British wheelchair tennis player Jordanne Whiley, who was competing in her fourth Paralympics. 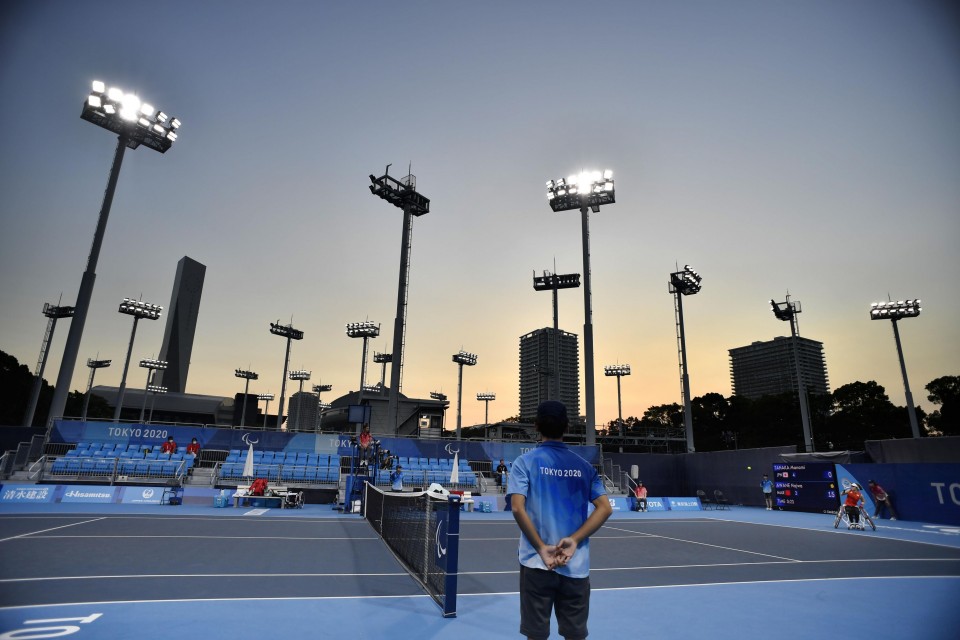 A women's wheelchair tennis match is played under the lights during the Tokyo Paralympics on Aug. 28, 2021, at Ariake Tennis Park in Tokyo. (Kyodo) ==Kyodo

"It's tough," she said. "But I think we had a ball, really, it's just different and we knew that. We're happy that the games were able to go ahead, and go ahead safely."

Athletes were required to undergo COVID-19 testing on a daily basis in Japan, while they were only allowed to go to a limited number of places, including their venues and accommodation. They also had to wear face masks and maintain social distancing.

Diede de Groot of the Netherlands, who won gold in the women's wheelchair tennis singles and doubles, said, "I think the funny thing is, even though you are in Tokyo you don't really see any of it." 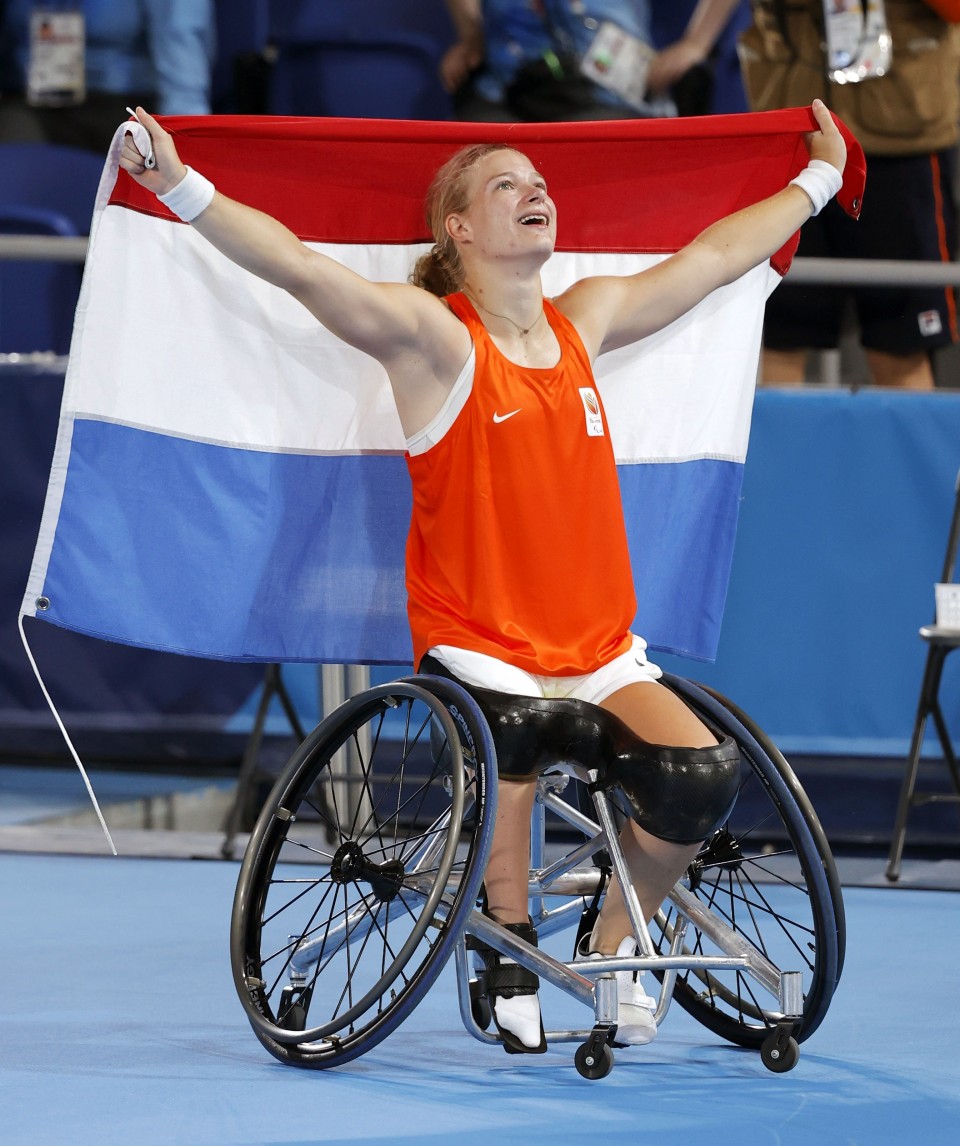 "But you do see so many volunteers, everyone wants to help. Everyone is so friendly. I think the spirit here is so kind," she said.

Some athletes referred to their stay at the athletes' village in the Harumi waterfront district.

French wheelchair tennis player Stephane Houdet, who won gold in the men's doubles, praised the cardboard beds in the village as "unique" and said they gave him his "best or second-best sleep" in his life. His doubles partner Nicolas Peifer complimented the food that was served.

For Japanese athletes, the home games provided them with a bigger chance to showcase their sports and feel the support of their fans, even though spectators were not present at venues due to the pandemic.

"I'm very thankful that (the Paralympics) were held even though there were different opinions about them," said wheelchair tennis player Yui Kamiji. "Many people were rooting for us and I received so many comments of support."

"Even when I was tired after playing a match, people said 'congratulations' or 'good work' with so much energy (at the venue). That was only possible because the Paralympics were held in Japan and I'm so thankful."

Mami Tani, a Japanese triathlete, also voiced appreciation for the organizers for making these Paralympics possible, and also took special note of the thousands of volunteers. 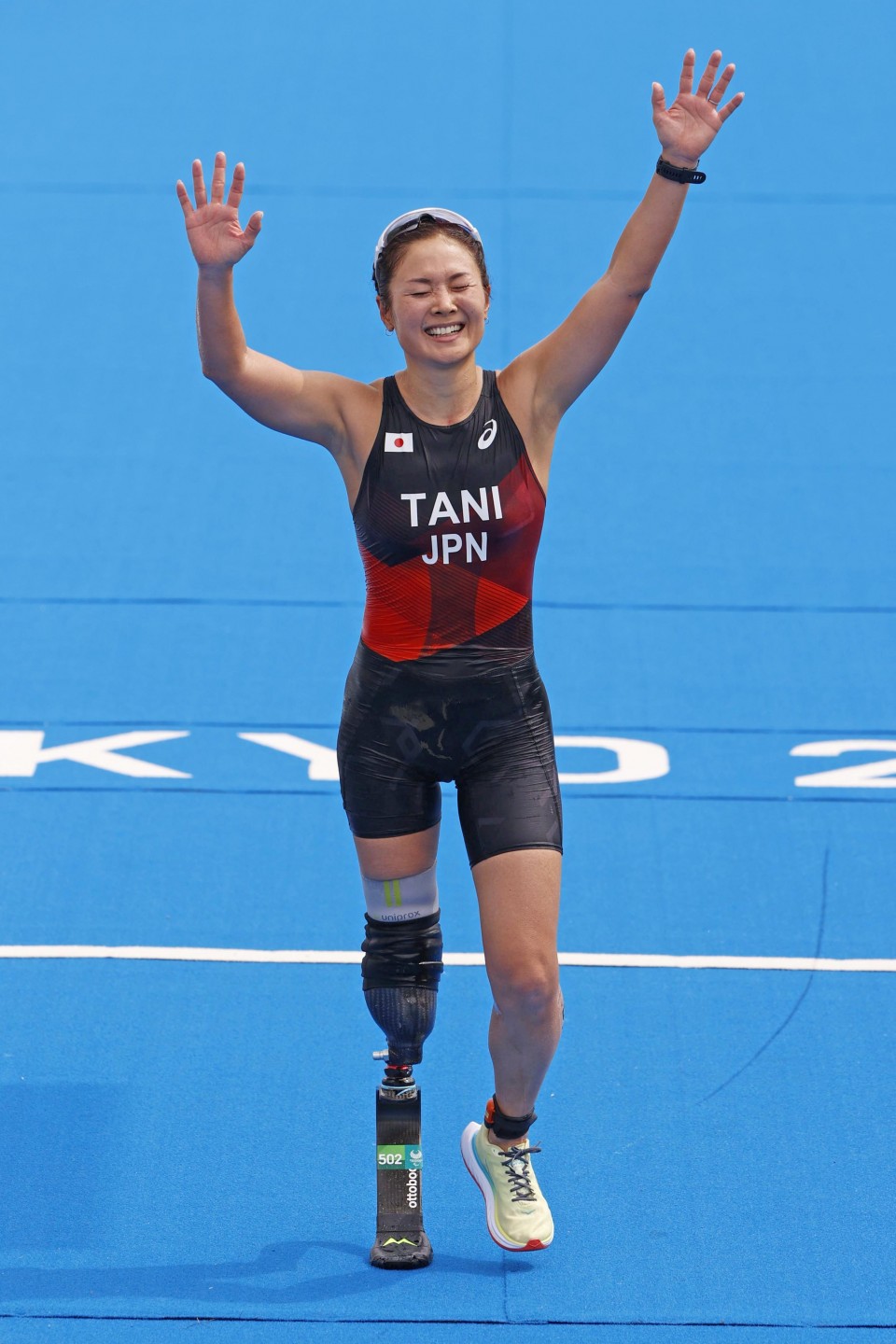 "The Tokyo Games were different from any previous games as they were held amid COVID-19," she said. "I am moved by the strength of Japan and I'm really proud of the hospitality provided by volunteers, whose smiles made everybody around them happy."

Nozomi Hosoda, who volunteered at the tennis venue, said it had been her dream since junior high school to help out at an Olympics and Paralympics on home soil, but she was unsure until the last minute whether she should participate.

"I couldn't tell anyone that I was going to volunteer, and I used to hide my volunteer uniform when I took the train," the 32-year-old said. "But now, I'm so glad that I did volunteer. I'm so proud of this experience."

She said helping out at both the Olympics and Paralympics allowed her to notice how many people had worked toward the success of the games, while also allowing her to meet fellow volunteers who came from various backgrounds.

On Sunday morning, a crowd of people gathered alongside the marathon course to watch athletes compete in one of the final events of the 13-day games, even though the organizers asked people not to do so.

"I know I shouldn't be here, but it was really moving," said a 34-year-old mother who watched the marathon in the busy Ginza shopping district with her 2-year-old son.

"I'm glad the Paralympics were held. I know that my son won't remember watching it, but I want to tell him when he is older."

Meanwhile, a taxi driver in his 70s said he changed the channel whenever he saw Olympic and Paralympic events on TV.

"I used to be a big Olympic fan, but I don't understand why they were held in Tokyo when we are having a difficult time with the coronavirus," he said. "Schools have canceled sports festivals, so what makes it OK to hold the Olympics and Paralympics?" 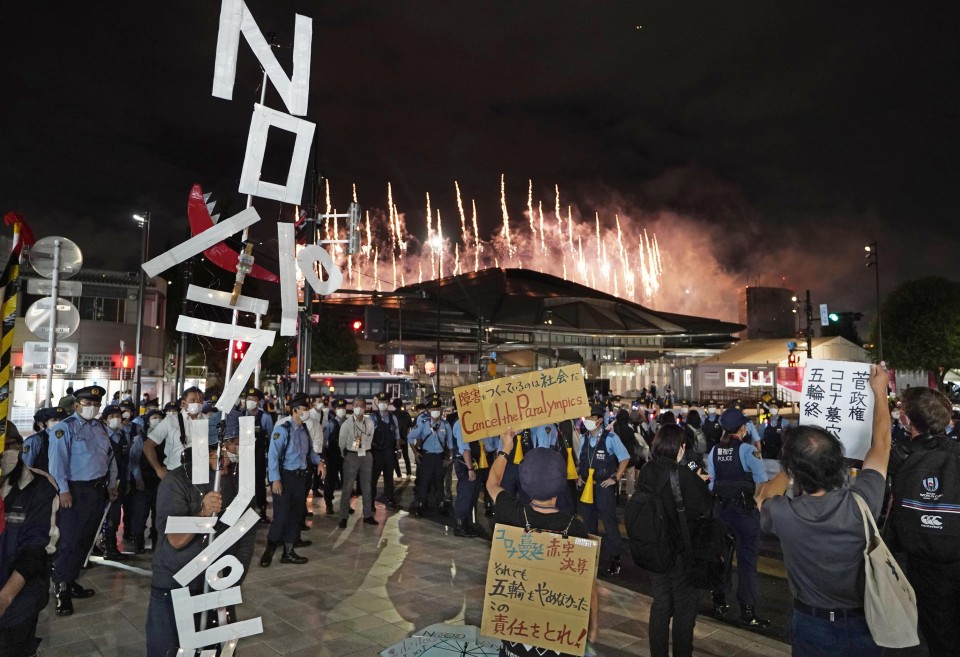 Protesters opposing the Tokyo Paralympics gather near the National Stadium in Tokyo during its closing ceremony on Sept. 5, 2021. (Kyodo) ==Kyodo