Yokozuna Hakuho avoided a misstep on Saturday as he dispatched tricky No. 3 maegashira Tobizaru for his seventh straight win at the Nagoya Grand Sumo Tournament, while ozeki Terunofuji also remained unbeaten at Dolphins Arena.

In a bizarre first career bout against the yokozuna, Tobizaru (3-4) challenged Hakuho with an unusual approach. Instead of taking an orthodox stance near the center of the ring, he stood a good distance back, while the yokozuna carefully pondered his options. 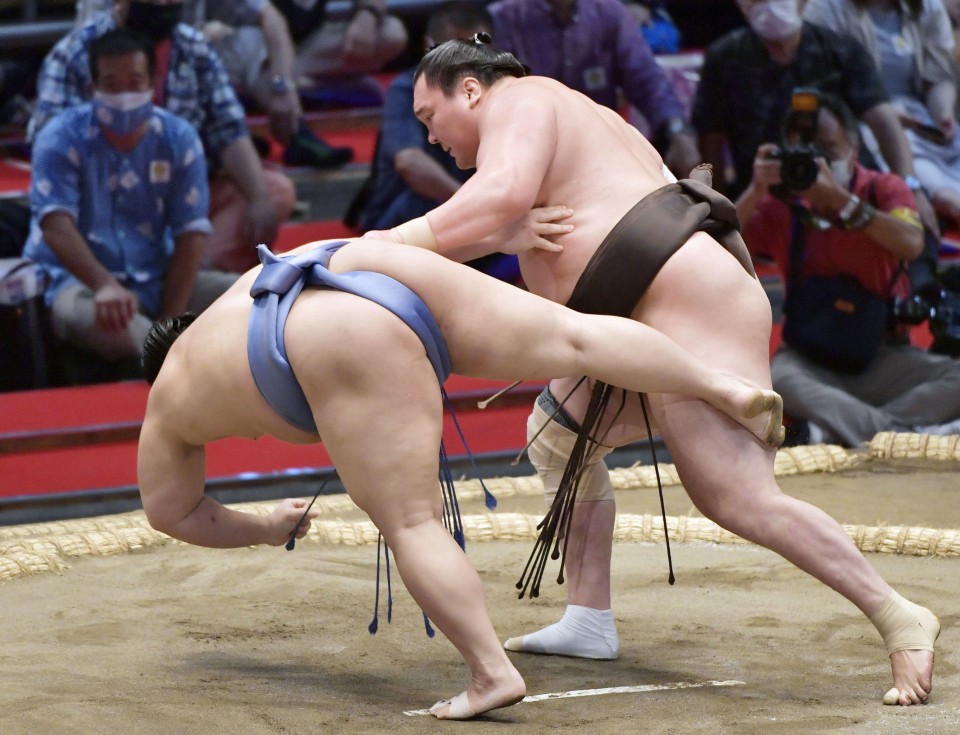 Once the bout began, after one false start by Tobizaru, both wrestlers kept their distance and merely feinted with each other in an effort to latch on to the other's hand. Twice Hakuho stood motionless in the center of the ring urging his opponent to come at him.

When Hakuho, who has won a record 44 career grand tournaments, finally did get hold of his nimble opponent's belt, it was game over as he quickly floored Tobizaru with an overarm throw.

Hakuho, who missed all or part of the past six tournaments with injuries and COVID-19 infection, needs a solid result at the 15-day meet to fend off retirement.

Terunofuji's solid start also continued as he smoothly grabbed a left overarm belt hold against No. 4 Kotoeko (2-5) and let his opponent struggle in vain before nonchalantly forcing him out of the ring.

The winner of the past two tournaments, 29-year-old Terunofuji can reach the sport's highest rank of yokozuna with another title, or a championship-caliber record here, as he continues his remarkable comeback after injuries forced him as low as the fifth-tier jonidan division in March 2019.

No. 11 Kotonowaka (6-1) stayed a win behind the two leaders after the 23-year-old overcame No. 9 Hidenoumi (3-4) with a twisting overarm throw in their first encounter.

Sekiwake Takayasu (3-2-2), who missed the first two days of the meet with lower back pain, lost his second bout after getting pushed out by No. 2 Takanosho (3-4).

Fellow sekiwake Mitakeumi earned his fifth win after leading No. 1 Daieisho (1-6) on a merry chase around the ring. The maegashira eventually lunged too far forward in his pursuit and was easily slapped down.

Wakatakakage (3-4) won the battle of komusubi debutants against Meisei (3-4), matching his rival's good footwork before crushing him out.

Six wrestlers, including Mitakeumi, are two wins off the pace at 5-2, with No. 5 Hoshoryu, No. 6 Kiribayama, No. 10 Tamawashi, No. 16 Chiyonokuni and No. 17 Ichiyamamoto, the tournament's newcomer to the elite makuuchi division, all winning their bouts.