Yokozuna Hakuho and ozeki Terunofuji remained the joint leaders after each picked up his fifth win at the Nagoya Grand Sumo Tournament on Thursday.

The 36-year-old Hakuho has won a record 44 grand tournaments, but has missed all or part of the previous six meets, and needs a solid record over 15 days at Dolphins Arena to stave off retirement. 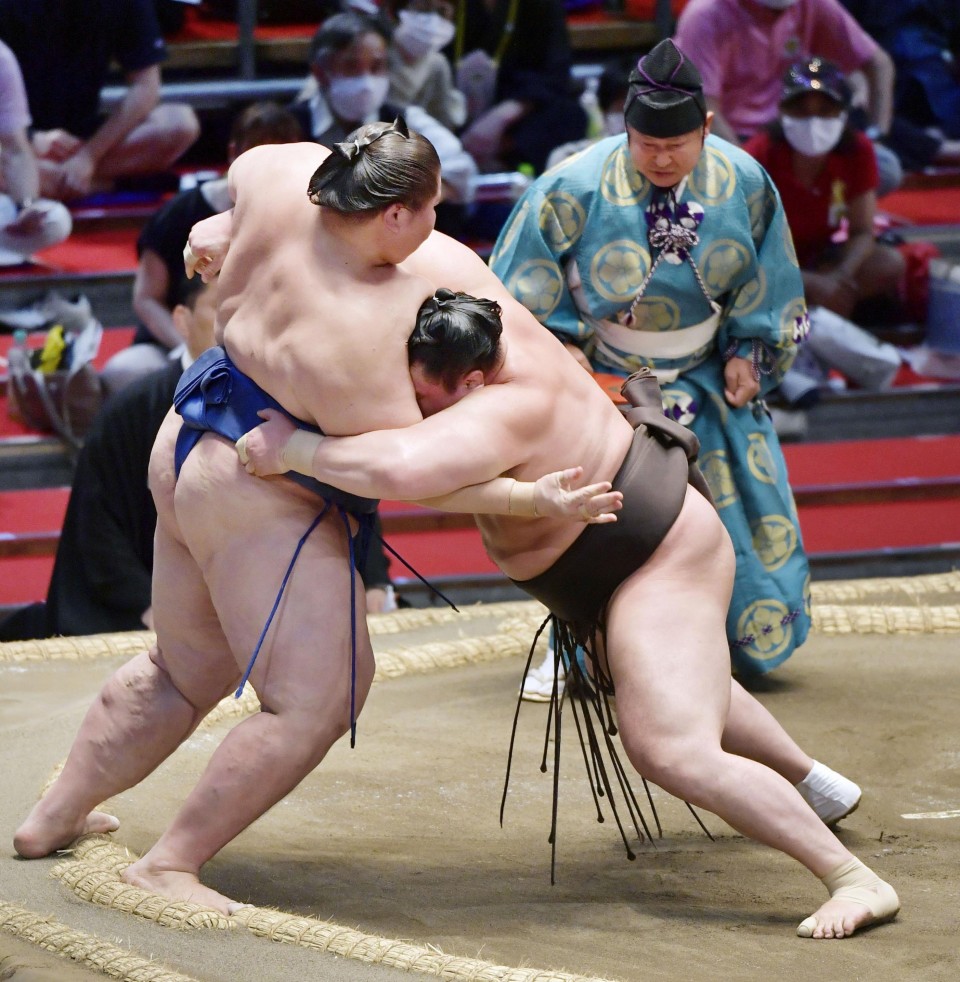 Hakuho (R) forces out Ichinojo on the fifth day of the Nagoya Grand Sumo Tournament at Dolphins Arena on July 8, 2021. (Kyodo)

He received the charge of 1.92-meter Mongolian No. 2 maegashira Ichinojo (3-2) and even allowed him a left overarm belt grip, but traded that for getting both his hands on his big opponent's belt.

Ichinojo pushed the yokozuna back toward the straw, before things went south. In one quick move, Hakuho dislodged Ichinojo's grip, reasserted his own and walked the maegashira backward out of the ring.

Terunofuji, who is chasing both a third straight championship and promotion to the sport's highest rank of yokozuna, faced a stiffer challenge after he misfired and failed to force No. 3 Hokutofuji (3-2) out on his opening charge.

The maegashira turned Terunofuji's flank and tried to tip him over backward, but that came to nothing. When the resourceful ozeki regained his balance, he locked up Hokutofuji's arms and drove him back before bringing him down with an arm lock throw.

Their Day 5 wins left the pair as the only two wrestlers with perfect records after No. 10 maegashira Tamawashi was shoved out by Bulgarian No. 8 Aoiyama (2-3) to his first loss.

Ozeki Shodai, fighting in the day's penultimate bout, failed to cope with the speed of crafty No. 3 maegashira Tobizaru, who shoved him out, leaving both wrestlers with 2-3 records.

Sekiwake Takayasu (2-1-2) suffered his first loss in his three bouts here, falling to komusubi Meisei (2-3). Takayasu missed the first two days due to back pain, and this loss will keep him from earning the 13 wins needed for a shot at earning re-promotion to the sport's second-highest rank of ozeki.

Fellow sekiwake Mitakeumi (4-1) won by default when his opponent, popular maegashira No. 1 Endo (1-4), withdrew after suffering a leg injury that will likely sideline him for three weeks.

Dynamic new komusubi Wakatakakage (2-3) was put under pressure from the start by No. 1 Daieisho (1-4), and nearly turned the tables on the January champion before being thrust out.

The Nagoya meet is the first grand tournament to be held with spectators outside Tokyo since November 2019.