Yokozuna Hakuho, and ozeki Terunofuji, who is aiming for promotion to that same exalted rank, each won on Friday to remain undefeated co-leaders after six days at the Nagoya Grand Sumo Tournament.

Hakuho, who is coming off right knee surgery in March, beat No. 3 maegashira Hokutofuji (3-3). The 36-year-old yokozuna has won a record 44 grand tournaments, but has missed all or part of the previous six meets, and needs a solid record over 15 days at Dolphins Arena to stave off retirement. 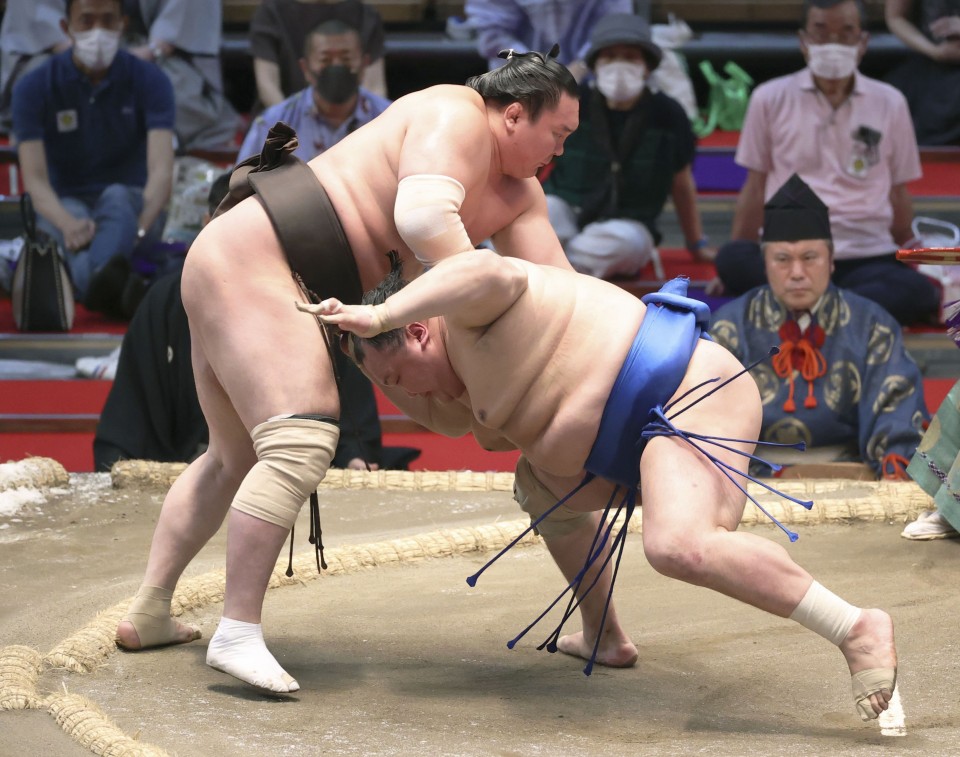 Yokozuna Hakuho (L) defeats Hokutofuji on the sixth day of action at the Nagoya Grand Sumo Tournament at Dolphins Arena on July 9, 2021. (Kyodo)

Facing a wrestler who relies heavily on thrusting and shoving, Hakuho rocked Hokutofuji back on the charge before stepping back and luring his opponent in. When Hokutofuji rushed forward into the trap, Hakuho slapped him down to seal the victory.

The 29-year-old Terunofuji, who is seeking both a third straight grand tournament championship, easily defeated No. 2 maegashira Ichinojo (3-3) to improve to 9-2 in his career against his fellow Mongolian. Terunofuji seized his opponent's belt on the charge, steered him toward the edge and forced him out in a matter of seconds.

A total of seven wrestlers began the day one win back of the leaders, but that number was trimmed to one, No. 11 maegashira Kotonowaka, on Friday.

Shodai (3-3) delivered a solid win over No. 4 Kotoeko (2-4), wrapping up the maegashira's arms on the opening charge and forcing him back out of the ring.

Mitakeumi suffered his second loss, outfoxed at ring's edge by komusubi Meisei (3-3), who dodged his opponent's final thrust as the sekiwake charged out of the ring.

Sekiwake Takayasu (3-1-2), who missed the first two days of the tournament due to back pain, stoically withstood the thrusts of No. 1 Daieisho before pulling him down to his fifth defeat.

New komusubi Wakatakakage (2-4) suffered his second straight loss, shoved out by No. 2 and former sekiwake Takanosho (2-4).

Kotonowaka (5-1) remained one win off the pace after bringing down No. 15 Tokushoryu (3-3) at the straw by "tsukiotoshi" thrust down -- a technique Tokushoryu helped popularize during his January 2020 New Year tourney championship.