Junya Ito scored before going off injured as Japan beat Serbia 1-0 in a friendly on Friday, their first encounter with a European nation since the round-of-16 defeat to Belgium at the 2018 World Cup.

Ito volleyed home at the far post just three minutes after the break, as Daichi Kamada's corner was flicked on at the near post by Shogo Taniguchi for the Genk speedster to net at Noevir Stadium in Kobe against a Serbia team managed by former Nagoya Grampus star player and manager Dragan Stojkovic.

"The players expressed the best they can in a game of real high intensity, with not much time or space," manager Hajime Moriyasu said. "We could have put the game to bed...but our team were resilient until the end." 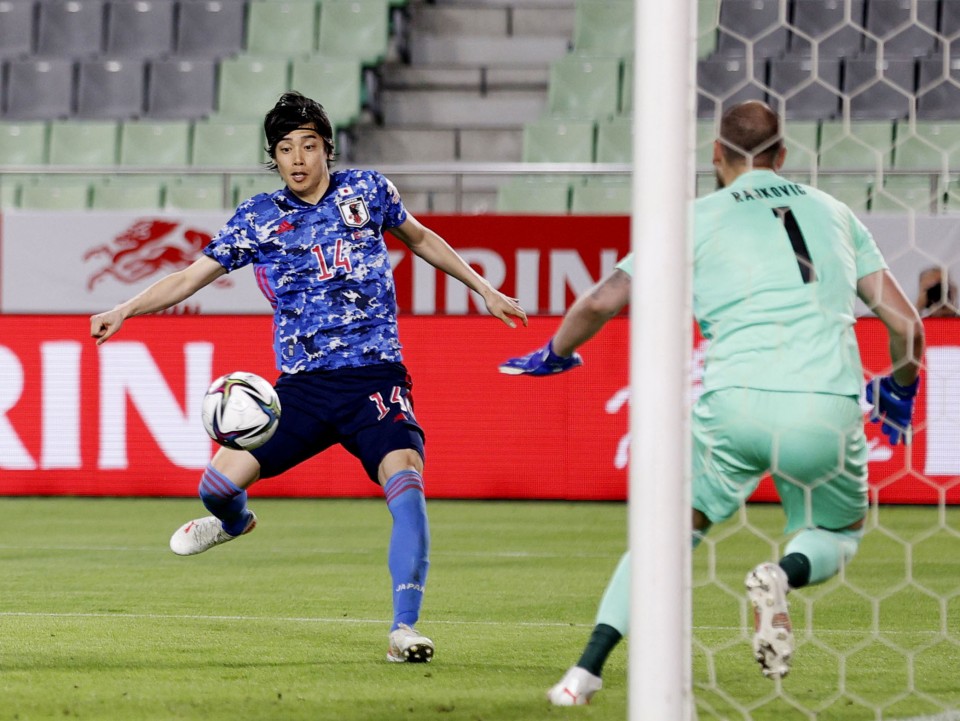 Japan's Junya Ito (14) scores past Serbia goalkeeper Predrag Rajkovic early in the second half of an international football friendly at Noevir Stadium in Kobe, western Japan, on June 11, 2021. (Kyodo) ==Kyodo

"Serbia did not have their best members but they still had good ones," he added, referring to Sevilla's Nemanja Gudelj and Liverpool's Marko Grujic among the starting 11 for the team ranked 25th in the FIFA rankings, above Japan's 28th.

Facing physically larger opponents, Japan tried to open up the visitors' defense with some neat touches but Kamada failed to reach a promising Takumi Minamino through ball in the opening stages.

After a cagey first half an hour, Ito forced keeper Predrag Rajkovic to make the first save of the match after cutting in from the right before his left-footed effort was palmed away.

Serbia could have done with the flair their manager used to show with remarkable ease, including at the 1990 World Cup for Yugoslavia, as they struggled for openings. 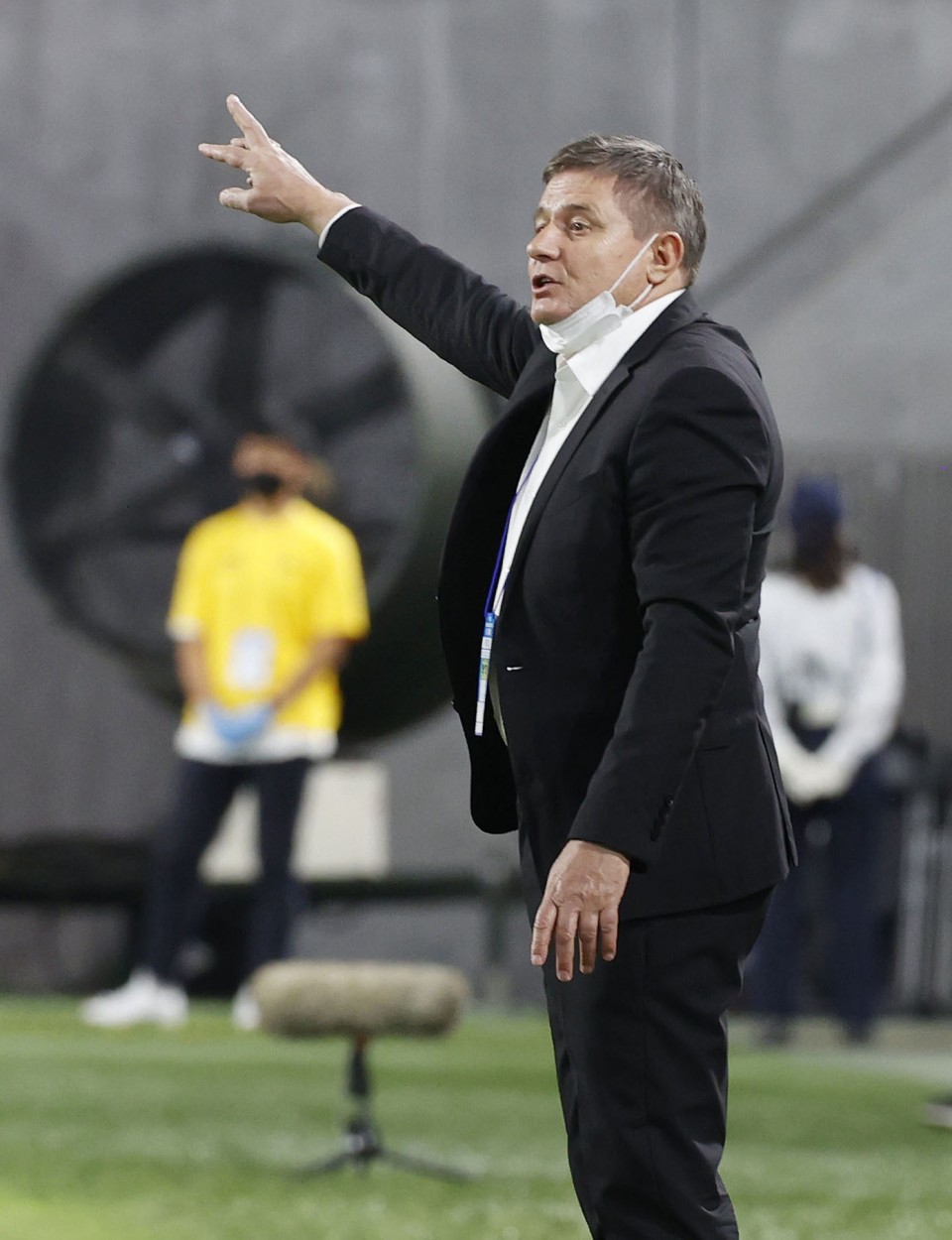 Serbia coach Dragan Stojkovic gives instructions to his players during the first half of an international football friendly against Japan on June 11, 2021, at Noevir Stadium in Kobe, western Japan. (Kyodo) ==Kyodo

Dejan Joveljic had the visitors' first sight of goal in the 41st minute but fired narrowly over on the turn from the edge of the box, while his strike partner Milan Makaric also steered wide from inside the area as they gradually picked up the pace.

But Japan quickly stemmed the tide with Ito's goal, which came after the halftime introduction of Onaiwu Ado sparked Japan's attack.

The forward thought he'd marked his international debut with a 64th-minute goal, but was flagged offside after tapping in Ito's cross at the far post. 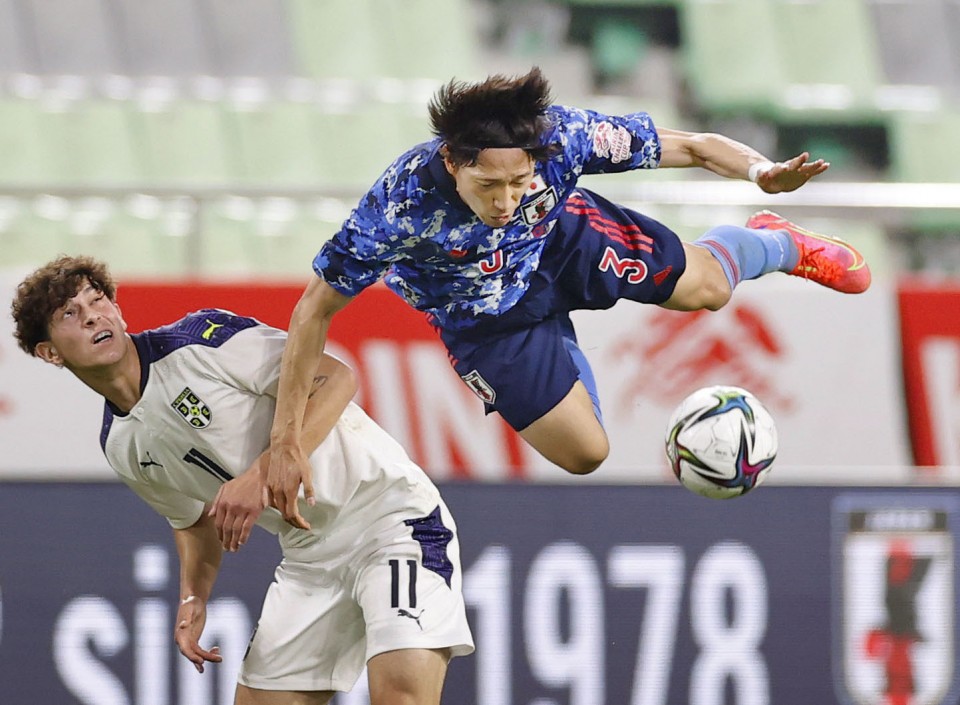 Japan's Sei Muroya (R) and Serbia's Nemanja Jovic vie for the ball during the first half of an international football friendly at Noevir Stadium in Kobe, western Japan, on June 11, 2021. (Kyodo) ==Kyodo

Ito went off following a strong challenge by Gudelj, replaced in the 76th minute by Takuma Asano, who left Serbian side Partizan last month over alleged unpaid wages.

The forward, scorer of 18 league goals for Partizan this season, had a fierce effort from distance denied by Rajkovic before again getting blocked by the keeper in a one-on-one in the final five minutes as the home side ended the game on the front foot.

Japan, already through to the final Asian qualifying round for the 2022 World Cup with seven wins from seven games, will wrap up their second-round campaign on Tuesday against Kyrgyzstan. 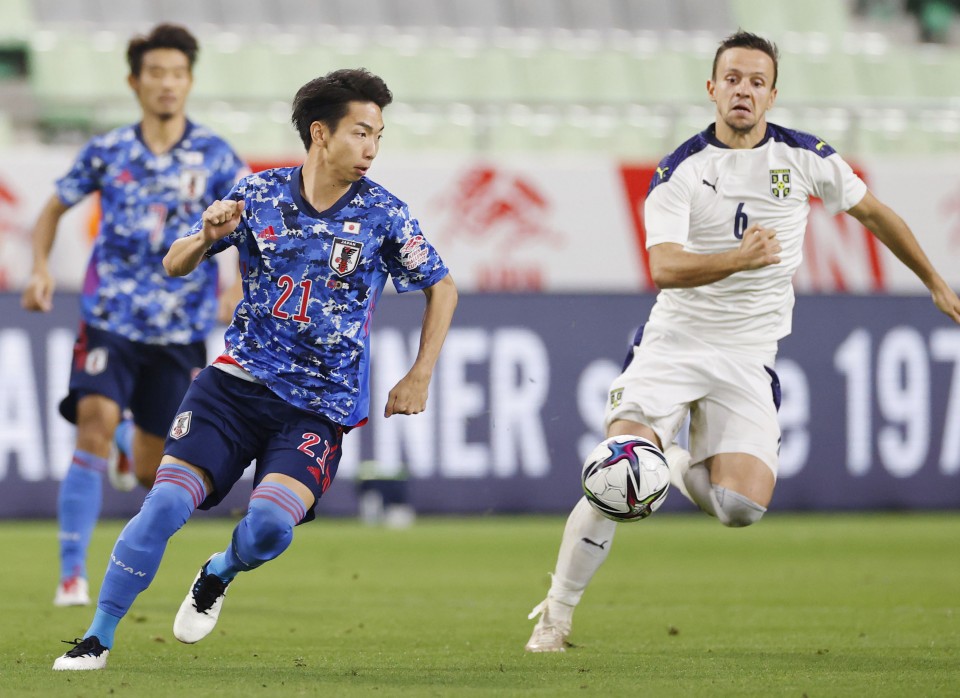 Japan's Hayao Kawabe (L) goes on the attack with Serbia's Nemanja Maksimovic in pursuit during the second half of an international football friendly at Noevir Stadium in Kobe, western Japan, on June 11, 2021. (Kyodo) ==Kyodo