Takumi Minamino on Monday tied Keisuke Honda's record of scoring in seven straight World Cup qualifiers, netting in Japan's 4-1 win over Tajikistan in the second Asian qualifying round for the 2022 tournament in Qatar.

The Liverpool attacker scored Japan's second in the 40th minute with a well-taken half-volley with his weaker left foot at Panasonic Stadium in Osaka Prefecture, where the Samurai Blue conceded for the first time in seven qualifying games of the round. 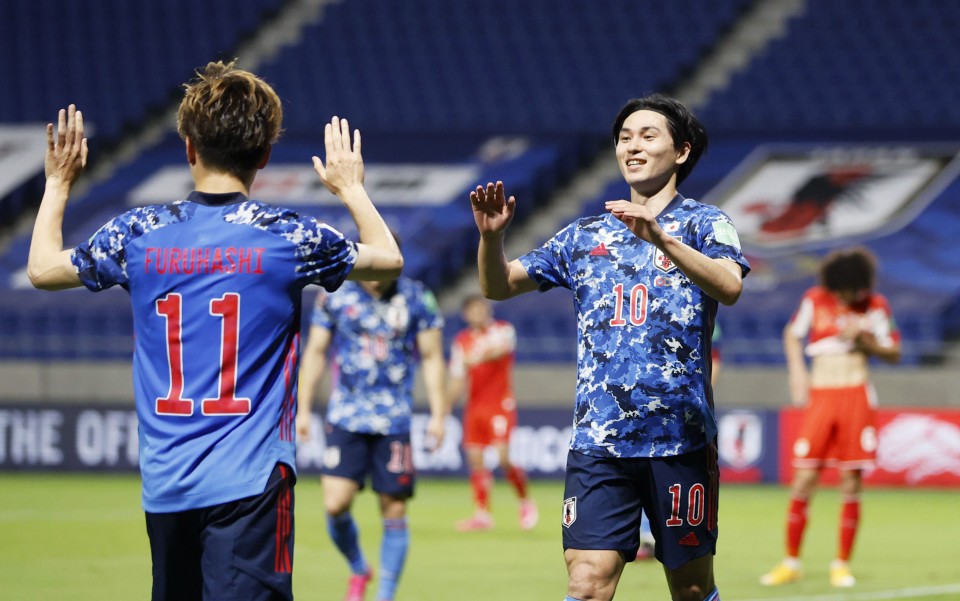 Takumi Minamino (R) celebrates with Kyogo Furuhashi after scoring Japan's second goal against Tajikistan during the first half of an Asian second-round Group F qualifier for the 2022 FIFA World Cup in Qatar on June 7, 2021, at Panasonic Stadium Suita in the Osaka Prefecture city of Suita, western Japan. (Kyodo) ==Kyodo

Minamino's goal helped settle the nerves of the unfamiliar-looking Japan side, already through to the final round, who were on the front foot but heading into the break level against the determined visitors.

Kyogo Furuhashi struck just six minutes in after Takuma Asano ran behind the visitors' backline only for his effort to be denied by keeper Rustam Yatimov. Furuhashi picked up the loose ball off a defender and steered home from just inside the box.

But Tajikistan needed just three minutes to end Japan's record of not conceding a goal, right-back Manucher Safarov whipping in a cross that was emphatically headed home by Ehson Panjshanbe.

Furuhashi on the right and Asano up top continued to offer some openings for Japan without an end product but the coveted second eventually arrived for Japan, with the move again started by Miki Yamane.

The right-back, who played the through ball that led to the opener, again played a long ball on the floor for Furuhashi to chase down the right. The speedster provided a low first-time cross, which was squeezed in superbly by Minamino at the near post.

"I'm happy to go level with such a great player," Minamino said after matching the record set in 2016 by Honda, who scored in three straight World Cup finals through 2018.

"Kyogo provided a good cross. I was targeting that space and I'm happy to have scored as it really was a nice pass," added Minamino on fellow 26-year-old Furuhashi, who went to the same high school in Osaka.

Minamino was given a rest along with sub-par Genki Haraguchi at half-time, but starters Kento Hashimoto and Hayao Kawabe both netted their first goals for the national side as manager Hajime Moriyasu's decision to keep faith with inexperienced players proved a success.

Substitute and debutant Tatsuhiro Sakamoto made an instant impact, providing a low cross from the right that Hashimoto rolled into the far bottom corner six minutes after the restart.

Japan kept up the pressure around neat play by substitute Daichi Kamada and Kawabe joined Hashimoto on the scoresheet in the 70th minute, rolling the ball into an empty net after visiting keeper Yatimov misplaced his pass while keeping possession.

"It helps for the development of the players with little experience to get end product. It also provides motivation for the team," said Moriyasu.

Japan will face Serbia in a friendly on Friday before wrapping up the second round against the Kyrgyz Republic next Tuesday.