Mana Iwabuchi and international debutant Yuzuho Shiokoshi each netted a brace Thursday as the Japanese women's national team thrashed Ukraine 8-0 in a warm-up for this summer's Tokyo Olympics.

Shiokoshi opened the scoring for Asako Takakura's side in the fifth minute of the friendly at Edion Stadium Hiroshima, netting from the middle of the area after Yuika Sugasawa stepped over a ball from Iwabuchi. 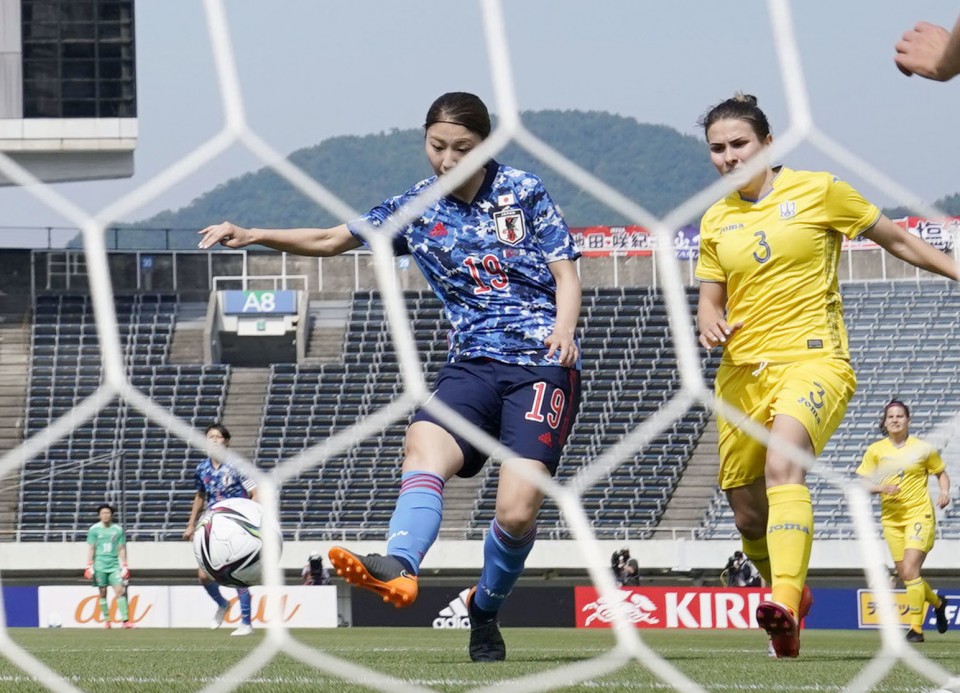 Yuzuho Shiokoshi (19) scores the opening goal as the Japanese women's national team thrash Ukraine 8-0 at Edion Stadium in Hiroshima on June 10, 2021 in a warm-up for this summer's Tokyo Olympics. (Kyodo)

The Asian champions took a 4-0 lead into halftime thanks to a second from 23-year-old Urawa Reds midfielder Shiokoshi, who netted from close range after Iwabuchi had an initial attempt blocked.

Iwabuchi struck her second in the 58th minute, while Hina Sugita, Mina Tanaka and Yuka Momiki added late goals for world No. 11 Japan as the 31st-ranked Ukrainians capitulated.

"Both goals were just about timing. In terms of today's results two goals had an impact, but I think we all need to see how to take one or two steps up," Iwabuchi said.

"The Olympics are going to be extremely hard, so I want everyone to be conscious of that as we move forward."

Japan captain Saki Kumagai echoed Iwabuchi's sentiments, underscoring the need to make further improvement if the team is to realize its goal of a gold medal on home soil this summer.

"Even though we were able to score a lot of goals, our approach can still be much sharper and if it isn't, we aren't going to win in the Olympic tournament," Bayern Munich defender Kumagai said.

Nadeshiko Japan will continue their Olympic preparations with a friendly against 28th-ranked Mexico on Sunday.

"We have two days off, so recovery will be an issue ahead of our next opponents, who present a little different type of challenge, and that will require adjustments," Takakura said.