Hong Kong pro-democracy newspaper Apple Daily, which has had its assets frozen and its executives indicted under a sweeping national security law, will publish its last print edition Thursday and shut down its online news page by midnight due to strains on manpower and staff safety concerns, its management said Wednesday.

The outspoken paper, which has long been a target for the authorities with its liberal stance, was seen as a beacon of press freedom in Hong Kong as its existence showed that diversity was tolerated, if not embraced, under the city's semiautonomous status within China. 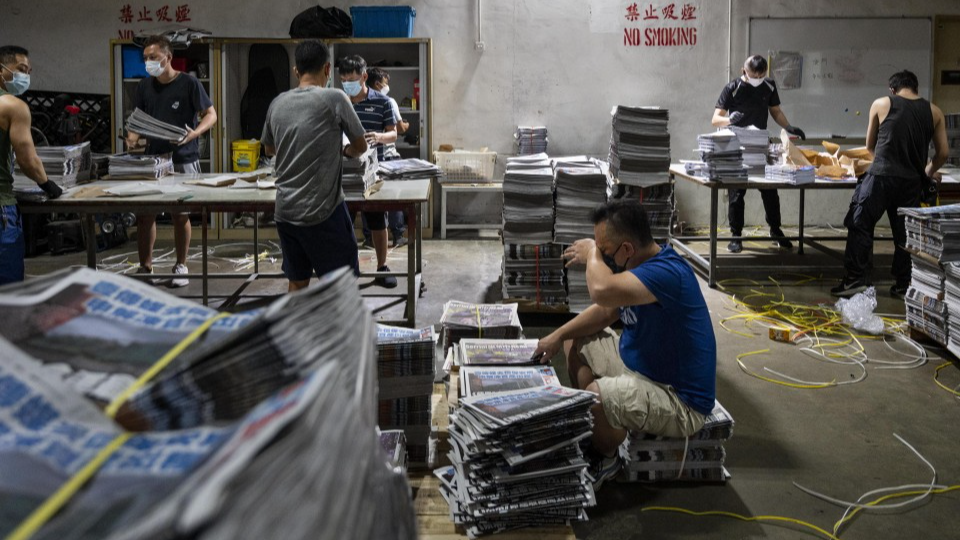 Workers compile fresh printed newspapers for its delivery at the printing facility of the Apple Daily newspaper offices in Hong Kong on June 22, 2021. (Anadolu Agency/Getty/Kyodo)

The management's decision came after the board of directors of parent company Next Digital Ltd. earlier Wednesday announced that "due to the current circumstances prevailing in Hong Kong, Apple Daily in its print form will come to an end no later than the last edition on Saturday."

The group's Next Magazine has also announced the end of its operation Wednesday, following those of the online financial news and English news sections that ended Tuesday.

The paper is expected to print about 1 million copies for the last edition, up from its usual daily circulation of 70,000 to 100,000 copies.

The arrests last year of Jimmy Lai, founder of Next Digital, and of five other executives last week for subversion, along with the freezing of assets of three companies handling printing and internet content, have brought the 26-year-old newspaper to its knees.

Apple Daily issued a statement titled "Letter to our readers: We Will Press On" on its website that said the paper faced an unprecedented crackdown but added, "History will pass judgement on today's accusations against Apple Daily."

"Though we are facing a sweeping clampdown on our publication, the staff of Apple Daily will hold fast to our duties faithfully and press on till the end to see the arrival of dawn," it said.

Readers and supporters of the paper expressed regret, with a 43-year-old female reader who only gave her surname Chu said, "Truthful news coverage, that's what matters most to Hong Kong people. Apple delivered that. We need different voices from different media, not just one voice."

On Wednesday, dozens of supporters outside the office of the paper thanked it and chanted, "Long live Hong Konger, long live freedom!"

The police have said the paper published more than 30 articles before and after the national security law was imposed on June 30, 2020, of which some sought foreign sanctions on Hong Kong and China.

The police on Wednesday also arrested Apple Daily's lead writer for editorials for alleged conspiracy to collude with foreign forces, local media reported, while adding that more arrests could be made. The man is known by his pen name Li Ping for writing columns for the paper.

Government leader Carrie Lam has stated that legal action against the paper does not constitute an infringement on press freedom as the authorities are targeting law-breaking acts but not normal journalistic work.

Apple Daily in Taiwan said in a statement that its online news page on the self-ruled, democratic island would not be affected as its finances are separated from Hong Kong. Its print edition ended in May over falling ad revenue.

The paper's closure has drawn concerns from foreign governments over Hong Kong authorities' commitment to upholding the rights and freedoms promised to the former British colony when it returned to Chinese rule in 1997.

The closure of the paper's Hong Kong operations "clearly shows how the national security law imposed by Beijing is being used to stifle freedom of the press and the free expression of opinions," the European Union Office to Hong Kong and Macau said in a statement.

"China made international commitments...to respect Hong Kong's high degree of autonomy and rights and freedoms, including freedom of the press. All rights enshrined in the Basic Law under the 'One Country, Two Systems' principle should be fully protected and restored," the office said.

"It is crystal clear that the powers under the national security law are being used as a tool to curtail freedoms and punish dissent -- rather than keep public order.

"The Chinese government undertook to protect press freedom and freedom of speech in Hong Kong under the U.K.-Sino Joint Declaration. It must keep its promises and stand by the commitments it freely assumed," he said.