Hong Kong's pro-democracy Apple Daily produced 500,000 copies of its newspaper on Friday, more than five times its normal daily circulation, the publication said, a day after five of its editors and executives were arrested for allegedly violating the national security law.

The print run was increased in expectation that readers and supporters would show solidarity by snapping up copies of the paper in the face of the latest crackdown on freedom of the press in the Chinese territory. 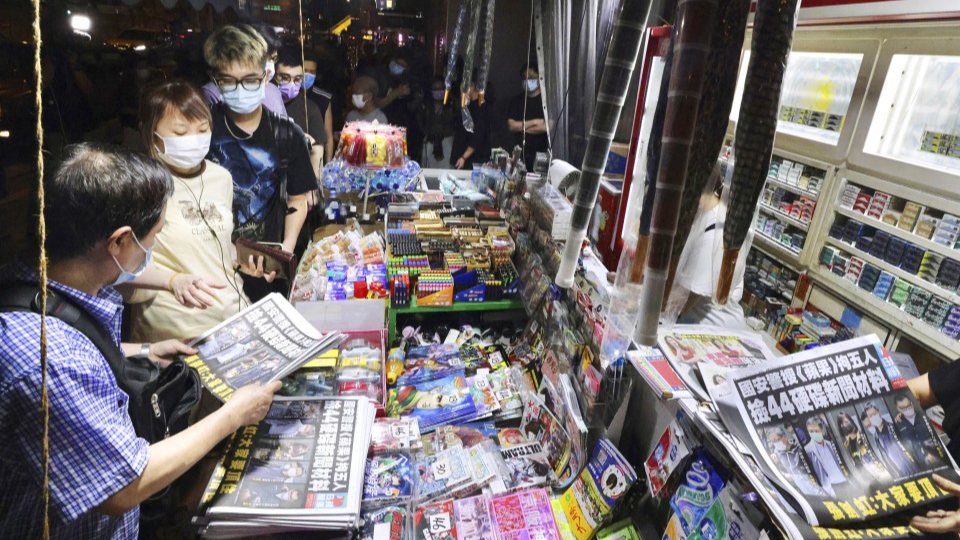 People stand in a queue to purchase copies of the Apple Daily at a newspaper stand in Hong Kong in the early hours of June 18, 2021. (Kyodo)

On Thursday, police raided the building housing the headquarters of Next Digital Ltd., the media group that runs the Apple Daily, as well as the newspaper's office, calling it a "crime scene" and urged its staff not to break the national security law.

There has been concern the paper will shutter in the near future, possibly before the Chinese Communist Party marks the 100th anniversary of its founding in July, as it comes under increasing political and financial pressure.

Authorities have frozen the assets of related companies, as well as those of Jimmy Lai, founder of Next Digital.

The media mogul, who is already imprisoned for a separate crime, is charged with colluding with foreign forces, a crime punishable by life imprisonment under the national security law.

"Freedom," said a man on why he bought 300 copies of the daily Friday to give away at his eatery, according to an Apple Daily report.

Another man who bought 40 copies from a newsstand and placed them outside a restaurant to give out for free said he hopes other people will show support for the daily.

The report said orders for extra copies were being placed throughout the morning.

Police on Friday charged two of the arrested with colluding with foreign forces, they said without naming them, while the other three remained detained pending further investigation. The daily said the two are group CEO Cheung Kim-hung and editor-in-chief Ryan Law.

In Tokyo, the Japanese government criticized the arrests, saying it is "growing gravely concerned" about the impact the arrests are having on "freedom of speech" in Hong Kong.

"It is important that a free and open system be maintained in Hong Kong under the one country, two systems policy," Chief Cabinet Secretary Katsunobu Kato said at a news conference, adding Japan will work on Beijing in concert with the United States.

At that time, many Hong Kongers formed lines at newsstands to buy the paper in a bid to show support and protest against curbs on the freedom of the press.

The arrests have also drawn criticism from Western countries.

British Foreign Secretary Dominic Raab also criticized China for using the sweeping anti-subversion law to target dissenting voices. "Freedom of the press is one of the rights China promised to protect in the Joint Declaration & should be respected," he tweeted.