Hong Kong's pro-democracy Apple Daily could be forced to shut within days as the government freezes its company assets over a collusion-with-foreign-forces allegation, the newspaper said Monday.

Prosecuted for breaching the national security law, the media group said after a board meeting that it will decide by Friday if the newspaper will cease operation after issuing the last copies on Saturday.

A Reuters report quoted Mark Simon, an adviser to Jimmy Lai, founder of media company Next Digital Ltd. that publishes the outspoken newspaper, as saying that the assets freeze has affected the daily's cash flow and closure could come in "a matter of days." 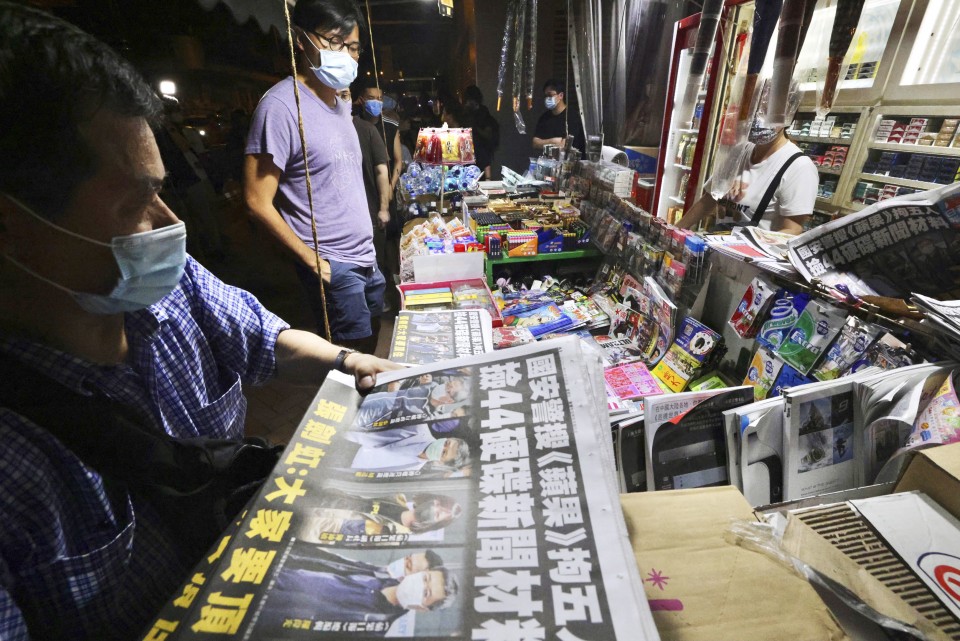 People purchase the Apple Daily at a newsstand in Hong Kong on June 18, 2021. (Kyodo)

Authorities last week indicted two executives as well as three companies handling printing and internet content for the paper for allegedly colluding with foreign forces. Banks were reportedly ordered not to handle the companies' assets.

In a letter to staff, the company said it will request that the government ease the assets freeze order by Friday to allow salary payment to its staff, or else it may cease operation after printing the last copies for Saturday and take its online news off by midnight Friday.

"The management wishes you all to hold your head high and work till the end, but risks are hard to predict, whether to go or stay is up to your own decision," the letter reads, allowing staff to quit with immediate effect. "If you stay, (we) hope you keep the Apple standard, do your best and finish your job."

The board will meet again Friday for a final decision.

Lai, who is already imprisoned for a separate crime, is also charged with colluding with foreign forces, a crime punishable by life imprisonment under the national security law.

Next Digital CEO Cheung Kim-hung and editor-in-chief Ryan Law, and the three companies were indicted Saturday for conspiring with Lai and others in asking a foreign country to impose sanctions on Hong Kong and mainland China.

Cheung and Law were denied bail and remanded into custody. The next hearing is set for Aug. 13.

Lai's assets in the company had been frozen in May.