Los Angeles Angels two-way player Shohei Ohtani threw five-plus innings of one-hit ball, but he was not involved in the decision as a solid pitching effort was wasted in a 3-1 loss to the Tampa Bay Rays on Wednesday.

The Angels went ahead early at Angel Stadium of Anaheim, but Junior Guerra (2-1) turned a 1-0 lead into a 3-1 deficit when he surrendered a three-run homer to Brandon Lowe in the seventh.

Ohtani was originally scheduled to start Monday, but he was scratched after getting hit on his right throwing elbow by a pitch while serving as the designated hitter against the Seattle Mariners on Sunday.

On Wednesday, the 26-year-old Japanese returned to the mound for his fourth pitching start of the season, but he was not in the lineup. He struck out seven and walked six, including the first two batters in the sixth before he was relieved.

"The pitches themselves weren't bad," said Ohtani, who walked the first batter he faced. "I think every pitcher has some difficulties going in his first inning on the mound." 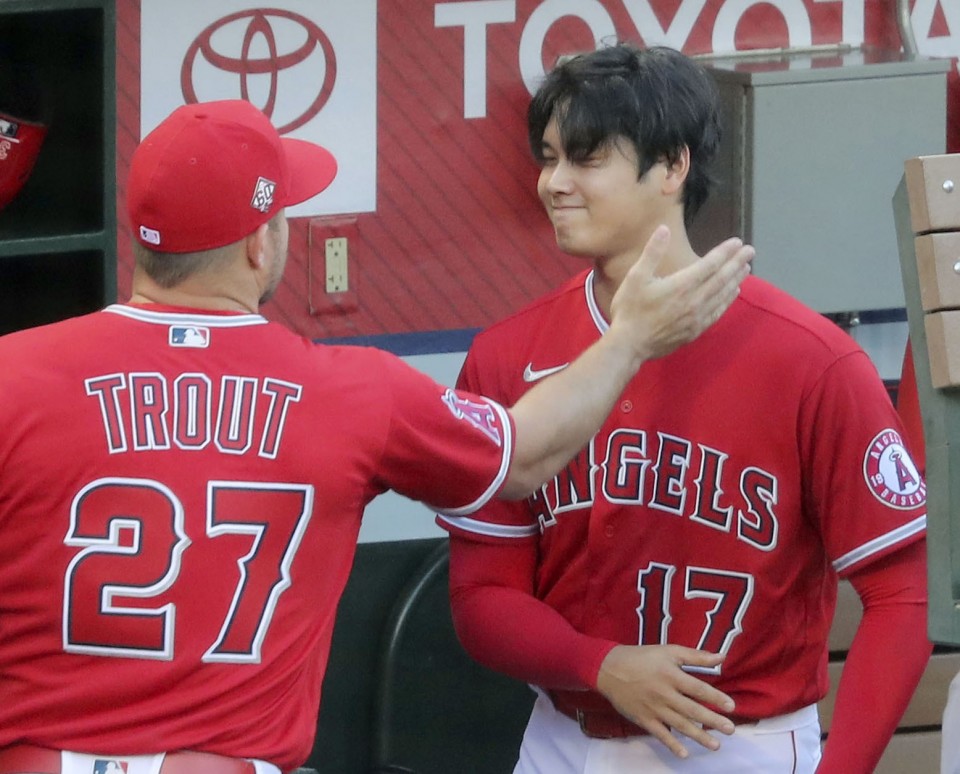 The Los Angeles Angels' Shohei Ohtani (R) and Mike Trout are pictured before Ohtani's pitching start against the Tampa Bay Rays at Angel Stadium in Anaheim, California, on May 5, 2021. (Kyodo) ==Kyodo

"Had I walked fewer batters, I could have pitched deeper into the game, and even today I thought I could have gone seven innings."

Angels manager Joe Maddon said he pulled Ohtani out of concern for his mechanics, saying he was "coming out of his delivery."

"That's why I moved him, because I saw him coming out of his delivery," said Maddon, who thought Ohtani took a step forward with his fastball.

"I thought he was outstanding. That's a great one (game) to build on. When you start finding your fastball, and such a powerful fastball and locating it, everything else gets better. Once he gets even better command of his fastball...I can see him going 100 pitches strong."

Yoshitomo Tsutsugo finished 1-for-3, flying out against Ohtani in his first at-bat. He also drew a walk off Ohtani and advanced on a wild pitch. 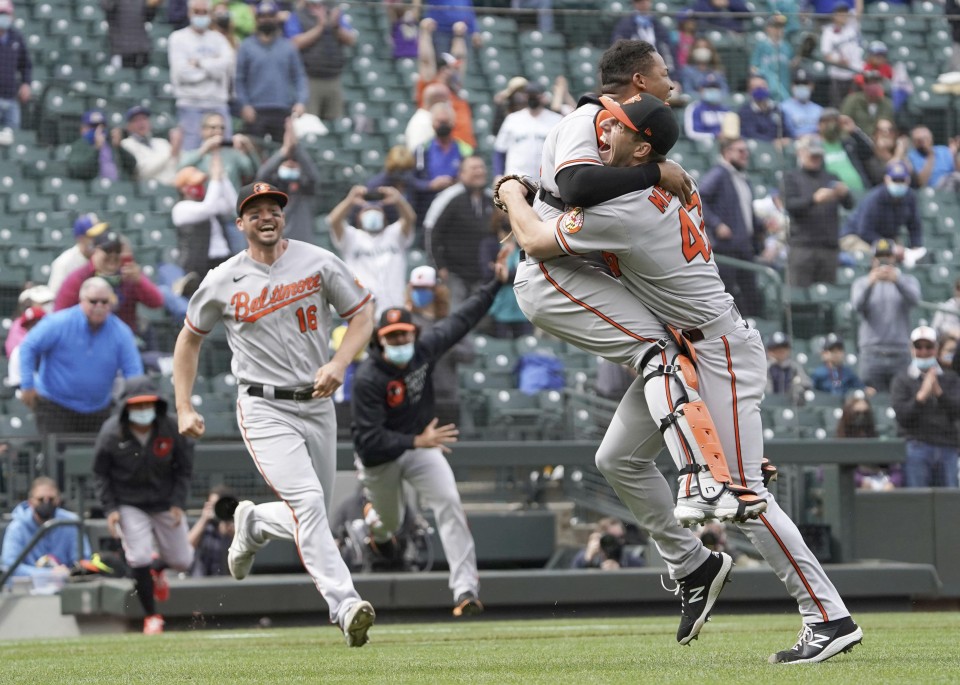 Baltimore Orioles pitcher John Means (R) celebrates with catcher Pedro Severino after throwing a no-hitter against the Seattle Mariners at T-Mobile Park in Seattle, Washington, on May 5, 2021. (Kyodo) ==Kyodo

At Petco Park in San Diego, Yu Darvish received no-decision as the San Diego Padres beat the Pittsburgh Pirates 4-2. Craig Stammen (2-1) got the final out of the sixth inning for the win in relief of Darvish.

Darvish was charged with two runs on six hits, and he walked one and struck out eight in 5-2/3 innings. He held the Pirates scoreless through five innings before allowing a leadoff homer to Bryan Reynolds, two more base hits and an RBI sacrifice fly in the sixth.

"My body felt heavy from the first inning. I threw long enough considering my condition," said Darvish, who hit a batter and was pulled with two outs in the frame.

"I think I'll get five days of rest before I pitch again so I'll take that time to think about how to improve my mechanics," he said.

At T-Mobile Park in Seattle, Yusei Kikuchi was saddled with the loss in a lefty-lefty matchup against the Baltimore Orioles' John Means, who threw a no-hitter in a 6-0 victory over the Seattle Mariners.

Kikuchi (1-2) allowed three runs on five hits, including two run-scoring singles in the second inning and a solo homer in the seventh, while striking out seven and walking one in seven strong innings of work.

Means (4-0) missed a perfect game by one wild pitch, allowing a runner to reach base in the third inning after striking him out. The runner was thrown out attempting to steal second base so Means faced the minimum with no other base runners allowed in the game.

Means, who struck out 12 of the 27 batters he faced and walked none, threw the third no-hitter of the 2021 MLB season.

"I knew before the game how great the opposing pitcher is," Kikuchi said.

"I tried to focus on my own pitching. I wanted to follow up on my last quality start, and I think I did what's expected of me."