The Japanese government formally decided Thursday to end the COVID-19 state of emergency in the Tokyo region on Sunday as planned as infections have declined from their peak and the strain on hospitals has eased.

The move comes as Prime Minister Yoshihide Suga seeks to revive a pandemic-stricken economy and step up preparations for this summer's Tokyo Olympics, though there is concern over easing restrictions amid signs of a resurgence of infections. 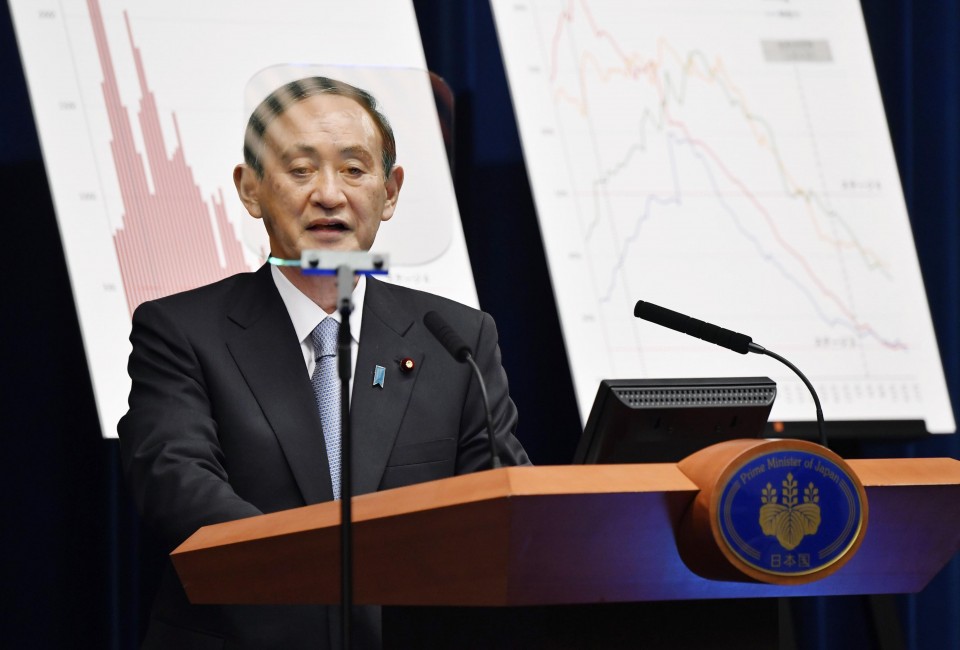 Japanese Prime Minister Yoshihide Suga meets the press in Tokyo on March 18, 2021, after the government formally decided to end the COVID-19 state of emergency in the Tokyo metropolitan area on March 21. (Kyodo) ==Kyodo

Suga formally announced the lifting of the state of emergency in Tokyo and neighboring Kanagawa, Chiba and Saitama prefectures, the last areas of the country under the measure, at a coronavirus task force meeting after an expert panel approved the decision.

The Tokyo region has been under the state of emergency since early January, with people urged to refrain from nonessential outings and restaurants and bars told to close by 8 p.m.

Businesses have been encouraged to adopt remote working and attendance at large-scale events such as concerts and sports games has been capped at half capacity up to a limit of 5,000.

The restrictions have produced "great results" in improving the situation, Suga said at a press conference, while asking the public to continue wearing masks, wash hands frequently and refrain from dining in large groups.

Tokyo Gov. Yuriko Koike also warned against complacency, saying the situation in the capital is still "severe" and the coronavirus has yet to be brought under control.

Infections have fallen since the restrictions were imposed, but the decline has bottomed out and even rebounded in some prefectures including Tokyo, which reported 409 new cases Wednesday, the most since Feb. 18. There were 323 new cases on Thursday.

Opposition lawmakers bashed the timing of the exit from the state of emergency. Yukio Edano, head of the Constitutional Democratic Party of Japan, said Thursday it was "premature" and he was worried that infections would jump again.

A resurgence of infections is of particular concern as the country is entering the season for cherry blossom-viewing parties as well as graduation and school entrance celebrations.

The governors of the four prefectures in the Tokyo region affirmed in a virtual meeting Thursday they will continue asking restaurants and bars to close early until the end of March, while pushing back the time to 9 p.m.

Suga said the government will take steps such as quadrupling the sample size of screening tests to detect fast-spreading variants of the coronavirus, as well as conducting about 5,000 tests per day in urban areas to identify asymptomatic carriers.

Japan's entry ban on virtually all nonresident foreign nationals as well as its suspension of the "Go To Travel" subsidy program to boost domestic tourism will remain in place for the time being.

The decision to exit the state of emergency comes as Suga seeks to resuscitate the world's third-largest economy and restore confidence in his administration following a series of ethics scandals at the communications ministry, including one linked to his eldest son who works for a broadcasting company.

It also comes with just over four months to go until the postponed Tokyo Olympics, which along with the Paralympics will likely be held without overseas spectators due to COVID-19 concerns. The Olympic torch relay, which organizers have called key to drumming up support for the games, is set to start in just one week.

Suga declared a one-month emergency in the Tokyo region on Jan. 7 amid a surge in infections, later expanding it to a total of 11 prefectures and extending it for most of them by another month, to March 7. It was further extended by two weeks to Sunday for the capital and the three neighboring prefectures.