Fukushima Prefecture's agricultural and fishery production has not recovered to levels seen before the nuclear crisis a decade ago, with those in the local industries still struggling to overcome the reputational hit their products sustained.

A total of 17,298 hectares of farmland around the crippled plant in the northeastern Japan prefecture was abandoned following the nuclear disaster triggered by a magnitude 9.0 earthquake and subsequent tsunami on March 11, 2011. 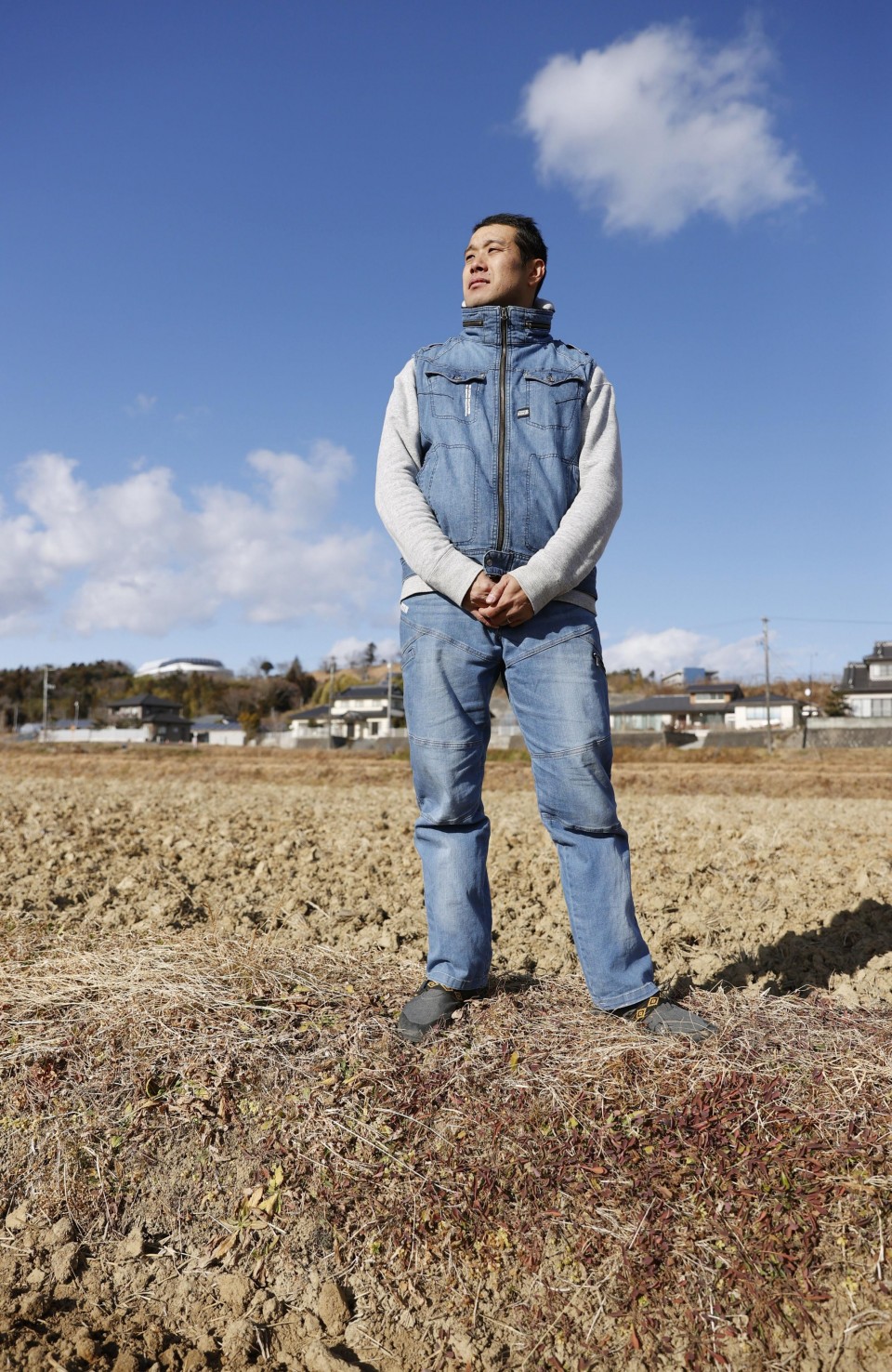 Nobuyasu Igari, a 38-year-old farmer, stands on his rice field in Naraha, Fukushima Prefecture, on Jan. 19, 2021. He hopes the prefecture's new breed of rice will raise farmers' incomes. (Kyodo)

It was the world's worst nuclear incident since the 1986 Chernobyl disaster.

Many farmers were forced off their land as it was contaminated by radiation, with some never returning after taking refuge from the disaster. By March 2020, cultivation had resumed at only 32.2 percent of the abandoned farmland in 12 of the Fukushima municipalities hit hard by the nuclear crisis, according to the prefectural government.

Rice remains Fukushima's major produce, still accounting for about 40 percent of agricultural sales, but it is no longer the in-demand resource it once was with customers avoiding it due to radiation concerns.

The price of Fukushima-grown rice was up to 10 percent lower than the average in Japan in fiscal 2014.

It remained 2.5 percent cheaper than the national average in fiscal 2018, the latest available data, according to the Ministry of Agriculture, Forestry and Fisheries.

In a bid to overcome the reputational damage the region's rice sustained, the Fukushima prefectural government will start widespread sales of a new variety this fall after 14 years of development. The prefecture claims it is of high quality and boasts improved flavor.

"I am motivated very much to grow the new rice, as Fukushima has not had its own breed of rice to represent the prefecture," said Nobuyasu Igari, 38, a farmer in Naraha, south of the devastated nuclear plant and an area from which all residents were temporarily forced to evacuate following the nuclear disaster.

"Farmers will benefit as the new rice will sell for a higher price," he added. In sales that began last fall at a limited number of outlets, 2 kilograms of the new rice breed named "Fuku Warai" (Smile of fortune) fetched 1,728 yen ($16), double the price of other Fukushima rice breeds.

Only rice passing radiation tests has been shipped from the prefecture.

The fishery industry in Fukushima is still mid-recovery from the impact of the nuclear accident. Fishing resumed off the coast of the prefecture in June 2012 in a limited area of ocean on a trial basis.

The prefectural body of local fishery co-operatives continues the practice of screening its catches to ensure they are safe for consumption amid lingering radiation fears, but the annual catch in 2020 remained less than 20 percent of that in 2010, the year before the nuclear disaster.

It said conditions for fully resuming fishing operations will be met in the near future, but there are concerns that a sudden increase in the catch could push fish prices down.

Another headache for local fishermen is the issue of how to dispose of a massive amount of radiation-tainted water stored since the accident in tanks on the grounds of the Fukushima plant.

The water was used to cool the crippled reactors, which suffered core meltdowns. After use, the contaminated water goes through a filtration system to remove various radioactive materials, apart from tritium which is difficult to separate from water.

The government maintains there will be no damage to the environment if the water is dumped into the Pacific Ocean off Fukushima after being diluted and when the tritium levels fall below the legal limit.

But many local fishermen have voiced concerns over any possible discharge, saying it could "again create reputation damage."